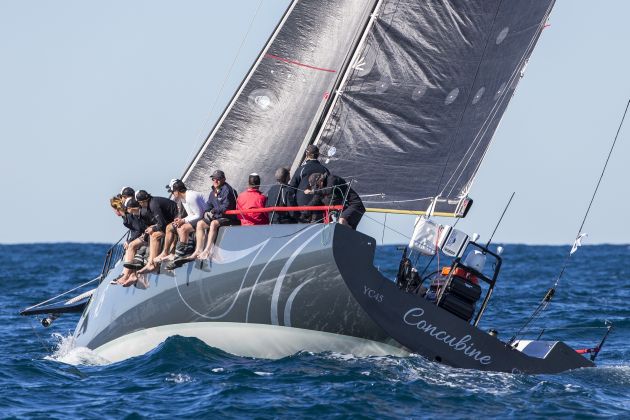 SYDNEY. Saturday morning will see a fleet of 23 yachts line up on Sydney Harbour for the start of Race 2 of the Cruising Yacht Club of Australia’s Blue Water Pointscore (BWPS), the Flinders Islet Race.

The 92-nautical mile offshore challenge follows the Land Rover Sydney Gold Coast in the series, and could give sailing fans some clues as to who will reign supreme in the conclusion of the BWPS, the Rolex Sydney Hobart Yacht Race.

This weekend the race itself will start at 1000hrs off Point Piper with a moderate westerly, shifting to a southwesterly, expected to mean that Loki’s race record of 7 hours 48min 44sec set in 2010 should remain intact.

The conditions look set to favour the slightly bigger boats of the fleet with three TP52s ready to do battle. Andy Kearnan of Koa, the boat he co-owns with Peter Wrigley, expects close quarters over the course of Saturday. “The Land Rover Sydney Gold Coast Yacht Race highlighted that the TP’s are all very very close and on their day any of them can get up. It’s a great, friendly rivalry and early conditions suggest an exciting run home so we’re looking forward to it.”

With a crew largely from WA, M3 will be one to watch after they picked up the win in IRC division 1 in the Land Rover Sydney Gold Coast Race. The boat has been registered at Royal Freshwater Bay Yacht Club but for the remainder of the Blue Water Series, will also carry the CYCA name; Rolex Sydney Hobart veteran Geoff Hill set to take up a senior position onboard.

M3’s skipper Brent Fowler commented, “It’s great to have the class within class – our boats pretty much rate the same and we’re excited to go toe to toe. We’ll have a few new guys on board, so a big focus will be on training them up through the Blue Water for Hobart.”

Fellow TP52 Celestial will be without their owner/skipper Sam Haynes, the CYCA director badly injuring himself in a cycling accident earlier this month. Celestial’s usual sailing master Sean Kirkjian will take charge and helm the boat.

Another notable absentee from the race will be Tony Kirby, the club board member taking in international travel which will see Peter Messenger skipper the Ker 46, Patrice.

Following on from the almost-interstate M3 of WA, South Australia’s Concubine return for Race 2 of the Blue Water with co-owner Shevaun Bruland hoping to deliver a result worthy of the City of Churches.

“We are an Adelaide based boat and most of our crew are from Adelaide, of that we’re very proud. But in terms of getting the best possible training for the Hobart we wanted to get a good number of miles under our belt on the east coast. When you add to that the opportunity to have other 40-50 foot boats around us, pushing us to improve our performance, that’s the challenge we knew would be important, the challenge that would benefit us and we’re really looking forward to it.”

Bruland’s senior position on Concubine in the BWPS is all the more notable with two female skippers set to line up on Saturday’s race. Sibby Ilzhofer will return to the helm of Dare Devil while Zoe Taylor will skipper her new boat, G.O., in competition for the first time.

Formerly Pazazz, Taylor recently purchased the Cookson 12 from Rob Drury and renamed the boat after a famous seafaring woman. “Grace O’Malley, or G.O., was a pirate in the 1500’s. She was a trailblazer in her own right and I found inspiration in that sort of strong woman.

“When I first started sailing there weren’t many other women involved but things are changing. We’re happy that there will be a couple on our boat and by the time we get to the Rolex Sydney Hobart, we should have around a 40% female crew,” Taylor said.

Taylor’s plans for the upcoming months of competition are exciting but she’s under no illusion that this weekend’s race is just step one. “This will be first Blue Water race in the boat. We’re excited to get going and have been busy getting things across the line. To be honest this is going to be our first sail as a full crew so will be a bit of a shakedown.”