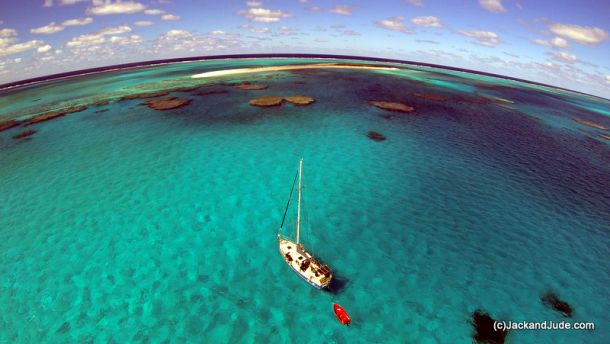 On 30 September 1969, the Coral Sea Island Bill officially acquired Australia’s tenth external territory. The Coral Sea occupies that part of the Pacific Ocean off the east coast of Australia between the parallels of Sandy Cape and Torres Strait, bounded by New Caledonia, Louisiade Archipelago, and Papua New Guinea.

Why the Coral Sea?

INTERNET is NOT available once mainland Australia is left behind. Sat phones / Yellowbrick trackers can send messages, and Marine Band frequencies have good reception. Therefore facilities such as Sail Mail should perform satisfactory. VHF signals DO NOT reach mainland repeaters.

In winter, from April to about November, the weather will be predominately South East Trade Winds that are often reinforced during the months of June, July, and August when they can reach 25 to 30 knots. Tasman Sea swell may invade the southern reefs during southern storms.

The summer months of December through to April are the most prone to cyclonic activity, but are also the calmest time. Jack and Jude have sailed the Coral Sea in December and February, finding the weather reports adequate warning to seek shelter if not too far offshore.
Bureau of Meteorology (BOM) on HF

The Australia Bureau of Meteorology does NOT directly broadcast Coral Sea weather on HF, but it can be deduced from two sources. The first being Queensland Coastal forecasts broadcast by VMC from east Australia. The second being the Mean Sea Level Pressure weather fax maps broadcast by VMC. A weather fax or decoder connected to a HF is required.

A DVD of our last journey through the Coral Sea showing the five most interesting anchorages is available from our website. http://JackandJude.com/DVD/

Mariners are advised to be prudent and not to trust this information without proper diligence. Although every effort has been made to check the accuracy of the details, the editors and authors do not imply or accept any responsibility for the accuracy of the contents.

A small oval-shaped island lying approximately 230 nm east of Gladstone and about 145 nm east-southeast of the southern end of the Great Barrier Reef. The island lies on the western end of an oval-shaped reef enclosing a lagoon with two narrow boat passages on the northern side. Passage into lagoon by keelboats is doubtful. The lagoon contains numerous coral heads. The sea breaks over the reef in most weather. The reef lies on Cato Bank, which falls away steeply on all sides.

The island is a mound of coral debris 6 m high covered in grass and creepers up to 1 m high. An automatic weather station, with two radio masts and a silver-painted hut, stands on the northeast end of the island. The island is almost entirely surrounded by shore reef. Map available on our website.

Wreck Reefs are a narrow, 18 nm long chain of coral reefs and low-lying sand cays in the southern part of the Coral Sea. They lie approximately 230 nm east of Gladstone and approximately 180 nm NNE of Fraser Island.

Porpoise Cay, 275 m long, 90 m wide and 3 m high, vegetated with low grass and a succulent similar to Pig’s Face without pink flowers.White Masked Boobies court in winter and nest on its sandy fringe while brown Common Noddies nest within the foliage. We also sighted about 20 pairs of Brown Boobies on the windward edge half tide rock.

Pieces of black coal lay amongst mankind’s plastic in the flotsam line. Embedded in the half tide rock are bits of rusting metal. The coal and metal very likely from the wrecks. Its surrounding lagoon and outer reef host beautiful diving and large pelagic fish including jobfish, tuna, and trevally along the reef edge. Cannonballs retrieved from the wreck can be seen at the low tide.

Bird Islet, approximately 500 m by 250 m wide and 6 m high, has low vegetation and a large colony of nesting seabirds including frigates, noddies, terns, and boobies. The islet sits in a lagoon with a surrounding outer reef. The coral reef to the north of Bird Islet is a sheltered coral garden which is a superb dive location.

Protected from ESE to SW in 12 m sand.

Find a sand patch amongst the coral in 16 m, some swell.

Kenn Reef 65 nm north of Porpoise Cay is located over 270 nm from the Australian mainland and is shaped like a leg and boot, 8 nm long and 4 nm along its southern edge. Kenn Reef is part of a submerged continental block called the Kenn Plateau, a region characterised by a series of troughs 1000 m to over 3000 m deep.

The three southerly reefs (the boot & ankle) lie upon a common shelf from which the northern reef (the leg) is separated by a deep channel. The smallest and most westerly of this chain (the toe), contains a conspicuous 1.8m high boulder on its NE side, which from a distance appears as part of a wreck. The wreck of a long liner lies on the S side of the reef.

The leg encompasses two lagoons further north with entrances facing SW that are exposed to winter swell. A small sand islet sits on northern one.

Of all the reefs, the southeastern is the largest with three emergent sand cays in its SW part. The only permanent land, Observatory Cay, about l00 m by 50 m and 2 m high has no vegetation. There is excellent anchorage for all winds except northerlies with easy access to these cays from an extensive shallow patch over the purest white sand. But getting to this anchorage requires careful visual navigation to avoid large numbers of coral heads and then passing over a shallow sand spit.

Anchorage good from NE through S to NW in 6 m sand inside coral lagoon with close access to Observation Cay with two other transient islets within a mile. Superb diving and fishing. Prolific bird life mainly Common Noddies, a number of Brown Boobies. We saw one Frigate Bird. Two admiralty type anchors exposed at low water near cay on eastern fringing reef may be from the Bona Vista, wrecked there on 18 March 1828. The outer edge is strewn with wrecks. Crystal clear water.

Good from NNE through E to SSW in about 8 m sand with submerged coral, opposite possible boat channel to cay.

Minimum of 3 m over sand bar after depths of 6 to 10 m through isolated coral heads. Easy transit with good light.

Anchorage from SE trades off north side. Several wrecks on shore.

East Diamond Islet has a spectacular anchorage with considerable vegetation upon which several species of seabirds nest. A light structure rises out the cay and the air is alive with many species of seabirds, featuring the most Frigatebirds we’ve ever seen. A 2006 report put the numbers at 2,500 Lesser Frigatebirds, a thousand pairs of Red-footed Boobies and very large numbers of Black and Common Noddies, Masked and Brown Boobies, Black-Naped Terns, Sooty Terns, Wedge-tailed Shearwaters, several Red-tailed Tropicbirds and a few Great Frigatebirds.

This is definitely one of the Coral Sea’s highlights. One of the larger reefs with a large sand islet enclosed within a lagoon that is the most distant from all land, 580 nm east from Cairns. Therefore wildlife is prolific. The anchorage is good for NW to N to SW winds, although winter swell from the Tasman can create a roll, especially at high tide. Beware! Boobies will land in your rigging.

Protection from NW to SW in 6 m coral sand, with minimum swinging room to a reef ahead. Close to a boat passage marked by an above water rock.

We shifted 1/3 nm north to the other side of a reef awash in an attempt to lessen the southerly swell. Protection from NW to SW in 6 m coral sand, with ample swinging room to reefs ahead and two submerged coral heads astern. An obvious boat passage dead ahead.

If necessary, there is an anchorage with better protection from the SW in 8 m over sand.

Passages through the Great Barrier Reef:

There are many routes to enter or exit the Coral Sea. Too many to describe them all here.

From the South, if departing from Bundaberg, Mooloolaba, or Lady Musgrave, a direct course can be taken under the Swain Reefs. If departing or heading for Cairns, we use Grafton Passage. It is wide, easy, and in the past we have had a favourable wind. When returning to Cairns we plan to arrive at Euston Reef Light around dawn in order to make Cairns in daylight. Safe in strong winds.

In 2013 we wanted to sail as far north as we could in the Coral Sea before heading for Cape York and choose Pandora Entrance as it has deep water until in the lee of the Great Barrier Reef. This proved wise as we were experiencing 30 to 40 knots SE winds. Raine Island Entrance, on the other hand, has a submerged coral barrier exposed to ocean swell.

We rounded Moulter Reef at less than 1/2 nm, with a sand cay, an easily found landmark at its northern tip, sighting breakers a mile or two northwest. We took overnight anchorage 5 nm from Moulter Cay, behind an unnamed reef in a 12 m sand patch close to the reef exposed to 30 knot SE, several other reefs helping to block ocean swell. Next morning, we made a fast passage through the reefs, with one narrow gap between obstacles of 1.3 nm, to another unnamed reef close to the inshore shipping channel. Here we found excellent anchoring behind a low sand cay in 6 m sand and coral rubble. The water was turbid. From there we sailed direct for Mount Adolphus Island.

Protection from NNE to S in 12 m sand patch, with minimum swinging room to a reef ahead.

Give the submerged reef off the NW tip a wide berth or it will surprise you.

Protection from E to SE in 6 m sand and coral rubble. Shipping Channel in sight.

Our E-book format Coral Sea Cruising Guide, available here in multiple formats for A4 printing/PC/Ipods/Ipads/Kindle, also contains historical notes, wreck information, and additional photos of the anchorages and attractions. You can support our efforts by a making a small contribution – Buy us a wine 