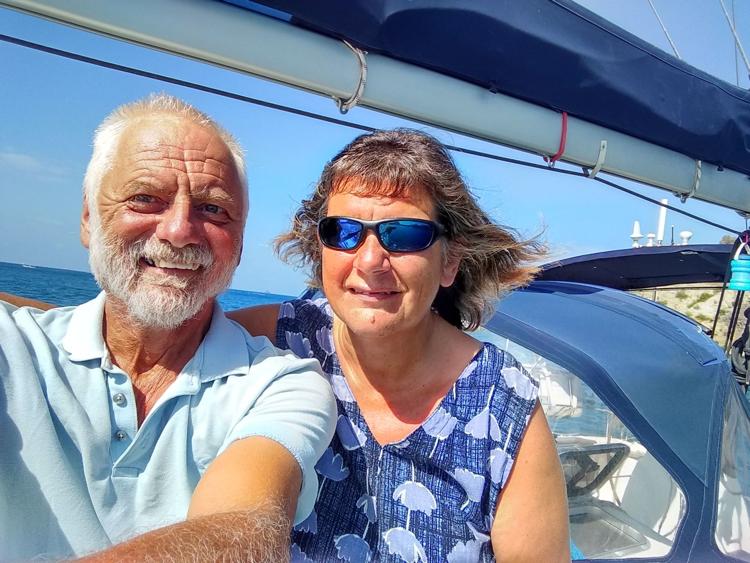 Lionel Sole and Elsie Downie left the Caribbean early to arrive to the United States before measures were taken to close the borders. (Contributed photo)

BEAUFORT — Sailors are fond of saying “plans are written in sand at low tide,” meaning they can quickly be washed away.

Those words have never been truer than in the time of a global pandemic. The coronavirus outbreak has changed many plans over the past few months.

“Cruisers around the world are really struggling to either get out of a hurricane zone, get to someplace they can be protected, or get home,” said Dianne Tetreault, the local Ocean Cruising Club Port Officer.

The Ocean Cruising Club is a small community of less than 3,000 members worldwide. Full members have made a 1,000-nautical mile offshore passage in a vessel of 70 feet or less. There are about 250 port officers who volunteer their time. Tetreault describes herself as an unpaid concierge for Beaufort and Morehead City.

She’s had many conversations of late with cruisers whose plans are up in the air due to shelter-in-place and social distancing orders.

“This is happening in the Caribbean, on boats that have gone through the Panama Canal trying to go west to French Polynesia and Australia and New Zealand,” she said. “Because everything in between, and everywhere the cruisers want to go, are currently shut down and doesn’t want anybody coming in. For the most part, everyone is trying to make plans for getting out of where they are.”

Cruisers may have more options as many southern states in American begin to lift those shelter-in-place and social distancing orders, but the past few weeks have been uncertain.

Dennis Biby arrived in November on his Bayfield 36’ Ferrity at the Morehead City Yacht Basin with plans to leave in March for the Caribbean. The coronavirus changed those plans.

“That was about the time things started popping,” he said. “It’s a good thing I didn’t leave then because I would have arrived as they shut down the borders. I could have been like some of these people out there who are either not allowed into a country or have to quarantine. I’ve got friends in Antigua right now and they got in literally a day or two before they shut that place down.”

Being in an age group that needs to pay attention to the virus – he’s 70 – Biby said he hasn’t been in a building or a vehicle in the past six weeks. He’s had groceries delivered via Instacart. He’s felt safe in Morehead City thanks to its smaller population.

“My plans are … I’ll be here till the end of April,” he said. “I’m pretty sure I’ll stick around for another month and see what happens. Then I’ll probably start working my way up north before hurricane season, and settle somewhere in the Chesapeake area.”