Until now, the state-of-the art for wind data is a masthead anemometer for the wind around you, and a marine weather forecast or GRIB chart.  But the weather forecasts are made hours earlier, and miles away.  You could never set your sails based on that.  But we are about to take another step forward in the evolution of sailboat navigation, with crowd-sourced real time wind maps.

The SailTimer Wind Instrument is a connected device, similar to the emerging class of home sensors you may have heard referred to as “The Internet of Things”.  It uses Bluetooth 4 LE to send wind speed and direction to your tablet or smartphone, which can then send your wind and GPS data to our cloud server.  Then when you are at home or office, wondering what the wind is like out on the water, you can check SailTimerMaps.com to see real-time wind maps.  Or when you are out sailing, you can set the optimal tacking route knowing the wind zones up ahead.

Maybe you have heard of apps like Waze for traffic speeds?  It is too expensive for the government to build traffic flow sensors on all roads, but this is solved by “the sharing economy”.  With all of the smartphones having GPS, we can share the GPS data on traffic speed, to help everyone with route-planning. The 2016 version of the SailTimer Wind Instrument is the first masthead anemometer to crowd-source wind data the same way. 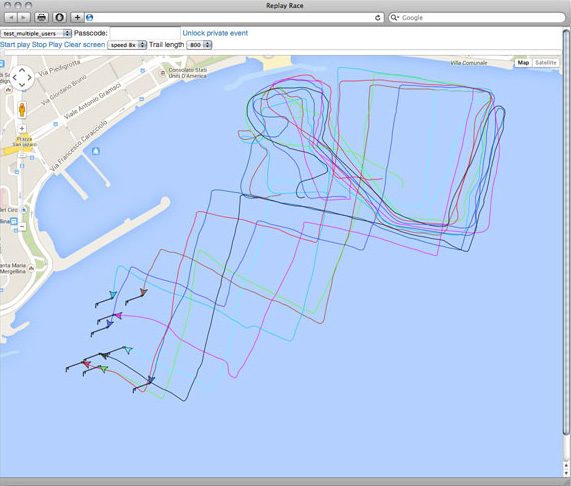 To give you an idea of what is coming, the screenshot above is from a real working example at www.SailTimerMaps.com. The America's Cup World Series was raced in AC45 catamarans as a lead-up to the 2013 America's Cup in San Francisco.  The wind and GPS data was released publicly to encourage new innovations.  Soon you will be able to share wind data from your wireless SailTimer Wind Instrument, but this America's Cup race from Naples, Italy provides a preliminary working example. They cross the start line at around the 12:15 mark.

The wind barbs on each boat show the wind direction and wind speed.  A long line on the tail indicates 10 knots of wind, and a short line indicates 5 knots.  This is just a beta test, but we are in the process of adding wind gauges and wind graphs like these from the SailTimer app, when you click on the wind barbs for an individual boats. Now at a regatta, spectators can watch a race (for free) as it happens.  Or coaches can replay race and wind conditions for tacking analysis in training.

You will be able to share and replay real-time wind and race maps with the 2016 SailTimer Wind Instrument, but you can check out the beta version now with a replay of wind and GPS data from the above America's Cup race at www.SailTimerMaps.com