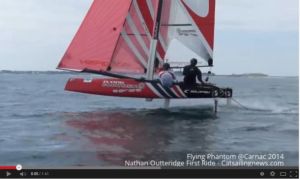 This week-end will start the final act of the 2015 Flying Phantom Series that will take place in Hamilton – Bermuda from Sunday 29th of November to Wednesday 2nd of December 2015.

An international fleet of Flying Phantoms will come together to enjoy 4 days of intense racing on Bermuda’s Great Sound. Bermuda was host in October of the Louis Vuitton America’s Cup World Series racing circuit and will be the venue for the 2017 America’s Cup. With the Flying Phantom Series Bermuda 2015, it will confirm that Bermuda is the place to be for foiling events.

The One Design races will take place in the Great Sound, the large body of water surrounded on almost all sides by the islands of Bermuda. A spectacular location offering what should be ideal conditions. The Flying Phantoms will be racing against each other on a course specially prepared by the Regatta Director David Campbell James. These courses will be laid out to offer a reaching start with a clearing mark in the middle, a leeward gate, a windward gate and a reaching finish after rounding the final mark. This should ensure fast, exciting and close racing on catamarans that take off in just seven knots of wind and can fly at two and half times the real wind speed.

Thirteen Flying Phantom teams registered with two additional pending coming from Europe and USA as well as from Bermuda as Oracle Team USA and Artemis Racing have based their own Flying Phantoms there.