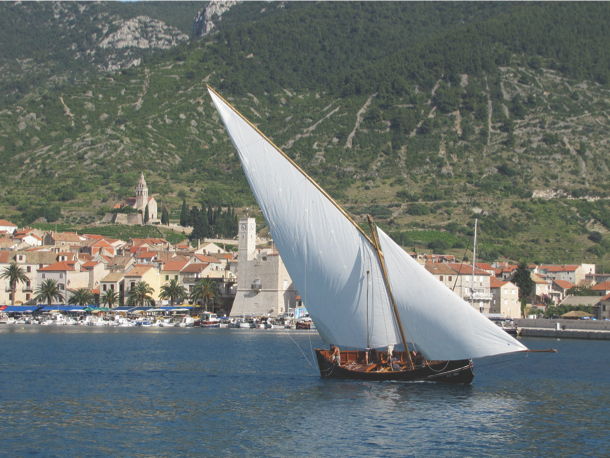 When the Yugoslav Republic disintegrated in the 1990s the east coast of the Adriatic descended into horrific violence.

Now, almost twenty years later, the area is peaceful, the damaged buildings have been rebuilt, the economies have stabilised and tourism has blossomed. Croatia, with its dramatic craggy coastline and over one thousand islands all dripping in history, has become the latest yachting paradise as sailors rediscover this extraordinary part of the world.

When our friends Mei and Kevin, who are three years into a five year round-the-world adventure, suggested we join them for the Dubrovnik to Split leg, we jumped at the chance. Who wouldn’t?

Especially when it meant leaving a freezing cold Melbourne winter for the Mediterranean sun.

Fourteen hours of warm sunshine every day, coupled with a brilliant cobalt blue sky and a sailing ground of crystal clear water. We were
in heaven.

The cockpit of Whisper HR (a Halberg Rassy 42) was drenched in warm sunshine and cooled by gentle breezes as we cruised along the Dalmatian coast. It was stunning.

The rugged mountains of the Dinaric Alps seemed to drop straight into the ocean. Picturesque villages built out of white limestone blocks with terracotta tiled roofs were dotted along the coast, crammed into land precariously close to the water.

An elegant church set amidst a pretty garden was a prominent feature of each village, with shops, bars and restaurants jammed along the waterfront. On every promontory, tiny lighthouses, each built to resemble a simple village house, stood like sentries, a reminder that this seaboard has a long maritime history.

We should have been relaxing and enjoying every second of the magnificent scenery.

Instead we were embroiled in a heated argument about flags. Was that Sun Odyssey to starboard flying a German or Belgium flag? The colours are the same but, which is which! What about that Bavaria with the red, white and green striped flag? Where the stripes horizontal or vertical? Was the green or the red on top? What about that one with … surely not, is that an emblem of three legs?

It was thrilling to be in the Adriatic and surrounded by boats from so many different countries.

We had our laminated copy of ‘Flags of the world’ out, ready and working hard. In the end we were confident that the Sun Odyssey was German, the Bavaria was Hungarian, but it was the British club pennants that many yachts were sporting, with their crowns and lions and mysterious crests, which defeated us. As a group of nerds, we were in our element.

We had arrived from Australia with a crisp new flag for Whisper HR. For three years the yacht had been proudly flying the Australian ensign as she made her way from Melbourne to Europe, but it was in a sad state.

Somewhere off the coast of Greece the ensign, with pole still attached, had taken an unscheduled dip and even though it had been salvaged, it was reduced to a bleached and torn relic of its former self.

In this part of the world it was always a buzz to see another cruiser flying the stars of the Southern Cross. Even when, on some occasions, it turned out to be a New Zealand yacht.

Trans-Tasman rivalry was set aside as stories were swapped and, more importantly, information exchanged. Which were the most exciting islands to visit, the safest anchorages; but more often than not, where were the best deals to be had?

There was no getting away from it; sailing in Croatia was pitched at the upper end of the market. With one night in Dubrovnik costing over 100 euros in marina fees for a thirteen metre yacht, the round the world sailors needed big elastic budgets. This is a cruising ground where fifty foot yachts were ordinary and one and two hundred foot motor yachts common.

The prize for the most outlandish boat we saw went to a motor cruiser which had an aquarium neatly built into the stern. As it lay parked against a small town quay, the aquarium, stunning with a drapery of blue lights, drew a crowd of gobsmacked locals.

Our yacht, with every inch of the lifelines covered in washing, looked unkempt and messy in contrast. We really should have smartened up, taken in the laundry, tidied up the cockpit, rolled up that sun shade and sluiced down the deck.

Costs aside, cruising Croatia was magical. Yes, we knew that the medieval walled city of Dubrovnik, the ‘Pearl of Croatia’, had streets paved of marble, although according to the geologist on board who likes to quibble, the limestone had not been fully recrystallised into marble. But what we hadn’t expected was that we would find so many other thriving medieval walled cities dotted along the coast and on the islands.

The route we sailed from Dubrovnik to Split took us through the fortified cities of Korcula, Hvar, Primosten and Sibenik, as well as other ancient settlements and towns. For a while we tried to rate them on a five point scale from cute to jaw dropping, but in the end we gave up. To a boat load of Aussies, each place was magnificent.

It was easy to forget that these stunning cities represented a violent and stormy past. The island of Vis, the furthest island off the coast, has had at least nine rulers in its recorded history. It was not until 1991 when Croatia became independent that the military finally left.

Croatia’s past and its emergence as a nation in its own right, might well have been steeped in struggle, but what remains of the various empires that once dominated the Adriatic: Greek, Roman, Venetian and Byzantium, to name but a few, is nothing short of breathtaking.

The coastal towns are typically built around a semi-circular stone quay often hundreds of years old. These provide a warm welcome to modern seafarers. To be able to tie the boat up to the quay, hop onto the promenade and be an immediate part of town life was a real delight. To wander along the promenade and through a 14th century gate into an ancient city with flagstone streets worn down and polished by millions of footsteps, but still flourishing and vibrant, was an unexpected pleasure.

Sailing the Adriatic is not exactly ‘adventure sailing’, although you always have to be aware of the possibility of encountering the dreaded katabatic wind, the ‘Bora’. In certain weather conditions this can rip in from the NE, accelerate down the steep coastal ranges and cause mayhem on the water.

Usually, though, this is more the type of cruising to see and enjoy the spectacle of villages and towns built with ancient sea traffic in mind. Like so many travellers before us, we made the most of it.

In Primosten we ate risotto flavoured with squid ink in a restaurant built out over the water and watched the sun set behind distant islands. In Korcula we walked the ancient paved streets searching for the birthplace of that great 13th century adventurer Marco Polo. In Sibenik we joined in with the locals celebrating the Festival of Children, where the 14th century alleyways of this fortified city were alive with plays, movies, music and art all dedicated to the lucky children of the town. On the island of Mljet we explored the National Park where, in the 13th century, a monastery was built on a rock outcrop in the middle of a lake by a group of dedicated Benedictine monks. On Vis we sank into a waterfront bar, tossed back iced coffee during the heat of the day and light crisp Dalmatian wine at night and never wanted to leave and, in Split, we clambered over Roman ruins to hear a mens a cappella choir singing Dalmatian folk songs in a seventeen hundred year old amphitheatre.

Everywhere we went we joined in the ritual of the evening promenade, where it seemed the whole town streamed to the waterfront to eat ice creams, drink wine, sing, dance and meet friends in the cool of the night.

If there is one place to be seen more than any other, it is the main town on the Island of Hvar.

This was no place to pull in with a tattered flag on the stern and undies and T shirts spread over the rails. Not when the town quay was jammed packed with immaculately maintained expensive yachts and the promenade full of tall, elegant men and women trailing pampered pets behind them.

What a fascinating city of contrasts. While the Benedictine nuns sit inside the convent walls making lace using an ancient secret recipe which transforms the agave plant into a useable thread, all around them the medieval city has reinvented itself with divine bars, food and music. We loved it.

No wonder Croatia is the hottest new place to go cruising. The fortified cities no longer defend against marauding armies attacking from the sea; now they look down on sailors having fun.

In one marina alone we counted over seventy five Sunsail charter yachts and that is just one of the many companies that operate in this area.

But it was not all big boat sailing along the Dalmatian coast. Dinghy sailing was alive
and thriving.

What a thrill to find ourselves amongst a fleet of lateen-rigged boats racing off the town of Komiza on the island of Vis. The rigs, heavy with sail, harked back to times past as they sprinted into the harbour, dropping sail at the last second.

From our berth on the town quay of Split, we watched enthralled as several hundred Lasers, including two Australians, streamed in and out of the harbour during the European Youth Championships.

It was painful to leave our friends and the boat in Split and return to a Melbourne winter knowing there were so many other walled cities to explore, national parks to investigate and the siren song of village quays beckoning us with their music, bars and cafes.

This is a place that demands more time.