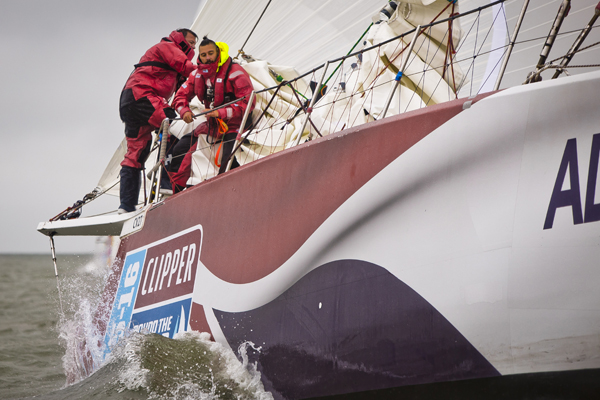 On the bow of Great Britain in the Clipper Race. Photo Clipper Ventures.

Having had time to process the absolute tragedy of losing their crew mate Andrew Ashman, the crew of IchorCoal have made the collective, highly inspirational decision to keep racing.

The unanimous choice was made on Sunday during a team meeting with Skipper Darren Ladd, Chairman Sir Robin Knox-Johnston and other members of the Clipper Race team supporting the crew.

Skipper Darren Ladd explained the decision: “It’s partly out of respect for Andy that we want to carry on, and partly a way that as a team we can deal with what’s happened. I think the only way we can all deal with it is to jump back on the boat and get back sailing, and do it with Andy in our hearts and minds at the same time.”

Timescale updates on the team’s return to racing will be provided as soon as we have them.

A fleet-wide minute’s silence was held at 1200 UTC yesterday in memory of Andrew, and many friends and family have been leaving messages of support and condolence for the crew and Andrew’s loved ones.

Across the fleet, the yachts have been doing their best to make good speed during frustratingly light winds as they head south towards the Canary Islands. GREAT Britain is top of the leaderboard again with LMAX Exchange now in third place, three nautical miles behindDerry~Londonderry~Doire on Distance to Finish, as of 1000 UTC.

GREAT Britain Skipper Peter Thornton reports that late in the afternoon Sunday, the team finally managed to sail south and west enough to get into some of the winds it was chasing.

As the yachts head further south, the winds should settle in again from the north east, the start of the Trade Winds.

Clipper Race Meteorologist Simon Rowell says: “I expect the winds to be steadier once the teams are level with the Canary Islands. The next 24 hours should see the massive wind holes across the course start to fill in again – much to everyone's relief. So far (and I hesitate to say this) GREAT Britain’s gamble to go west seems to have paid off, but the final proof will be if they hold the narrow band of winds long enough to get back into the general flow.”

“We are still confident that our plan will come good, but the waiting game is a hard one to play, especially during a trans-ocean yacht race. Thankfully a healthy breeze finally kicked in late on and we are making good progress at last.

“I was not too concerned as I watched boats pass us on the rankings, everyone is making their own play and I would expect the more westerly boats to be climbing the leaderboard at this stage, but the advantage of being out there this early remains to be seen.”