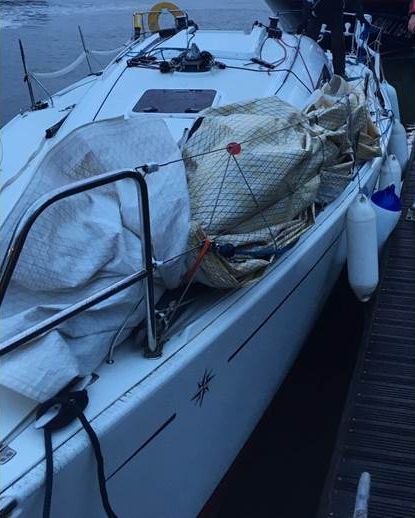 At 2am on May 13, 2017, the volunteer crew of the Mumbles All Weather lifeboat were paged to aid a dis-masted yacht.

The RNLI media release reported that the yacht had become dis-masted with four crew on board midway between Ilfracombe and Swansea.

“One of the crew was suffering sea sickness but their symptoms eased once we got under way,” said Deputy second coxswain James Bolter. “We were on scene within an half an hour. It was pretty tricky locating them as they lost use of the main radio when the mast came down but the skipper had the foresight to have a hand held VHF too. The crew of the yacht had managed to free the mast, not an easy task in 30 knots of wind. Both boats made their way back to Swansea and the lifeboat was re-housed and ready for service at 6am.
“We have to commend the skipper of the 9 metre yacht for calling for assistance rather than trying to make way with a dangerous sea and damaged rigging. We also are grateful for the offer of assistance from the Training Ship Lord Nelson and the yacht May contain nuts which was making passage in the area at the time.”
In an unrelated incident, a solo sailor who set off his personal locator beacon (PLB) when he realised that he was becoming ill on board his yacht was located and airlifted by Coastguard helicopter to hospital.

The UK Coastguard received an alert from the PLB at 2.40 pm. Because the man had registered his beacon with the UK Coastguard, his next of kin details were readily available. The Coastguard contacted the sailor’s wife who confirmed that he was out sailing between Portland and Portsmouth.

The Coastguard scrambled a Coastguard helicopter and requested the Weymouth RNLI Lifeboat to launch. The helicopter homed in on the signal from the beacon, and once the casualty and his vessel were located, a helicopter winchman was able to assess the man. He was then airlifted to Dorchester Hospital.

Aimee Phillimore for the UK Coastguard said: “This is a great example of how a personal locator beacon, when properly used and registered, can save a person’s life. This solo sailor ensured that, should he get into difficulty whilst out at sea, he had the right equipment to give him the best chance of being located and rescued.

“If you fall overboard, your boat is suddenly lost or you are taken ill whilst solo sailing, you’ll need to raise an alarm and ensure that you can be located. A device such as a personal locator beacon (PLB) or a man overboard (MOB) device will assist in your rescue. You will need to choose a device that is best for your type of water activity – consider whether you mainly sail close to shore or offshore and whether you are usually with other experienced crew.”