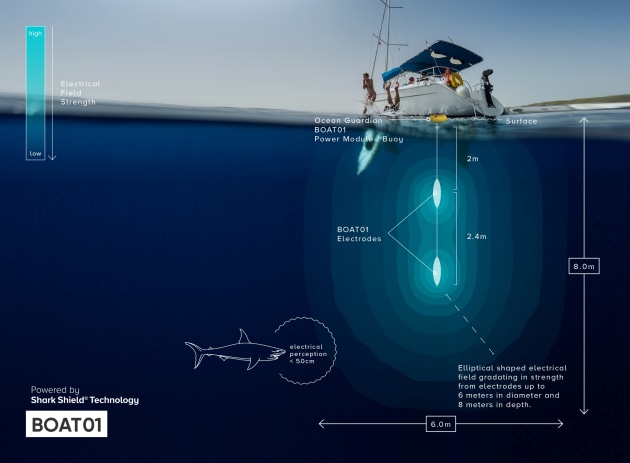 Ocean Guardian, the company behind the development of the Shark Shield deterrent technology, has unveiled a prototype of a system designed for use with boats and jetties. To date, the technology, billed as the world’s only scientifically proven and independently tested electrical shark deterrent, has mainly been made available for use by surfers and divers.

The new model, due to hit the market in May, is called BOAT01 and is designed to be deployed off the back of a boat or jetty, creating an 8x6m safety zone. The system works by generating a powerful electrical current which affects the sharks' receptors, forcing them to turn away but without harming them.

Up to five BOAT01 units can be daisy-chained off a single power source to create a virtual net or a larger protected swimming area. It can be powered by a built-in lithium battery for up to 8 hours of continuous operation, or can be connected to a boat's 12V/24V power. Solar power is also offered as an accessory for continuous unattended operation.

Different antenna lengths can be used to create a deeper protection zone if required. For instance, one potential application is with fishing boats and charter vessels to prevent sharks from attacking hooked fish. The BOAT01 has a RRP of $2,499.

In addition to the floating Boat01 model, Ocean Guardian is also introducing a hand-held deterrent called the eSPEAR designed for use by divers and snorkellers as a lightweight, easy-to-use option.

The eSPEAR features a trigger-activated extendable baton which, when released, creates an electrical field up to 1m in diameter and 2.5m long to ward off any shark approaches. It is rated to a depth of 100m and is powered by a built-in lithium battery with a wireless recharging dock.

Ocean Guardian CEO, Lindsay Lyon, said typical applications for the eSPEAR might include spear fishermen whose prey attract the attention of nearby sharks, and scuba divers who feel vulnerable during decompression stops.

“Our customers have been asking for a smaller device, so we're excited to bring this product to market enabling people to help mitigate their fear of sharks and enjoy the ocean, and help save our marine life,” he said. “It’s very simple to use – simply attach it to your dive belt, swimsuit or trunks and you can swim in the ocean with the comfort of knowing you have the power of Shark Shield Technology at your fingertips.”

The eSPEAR is available in five colours for $299 RRP.