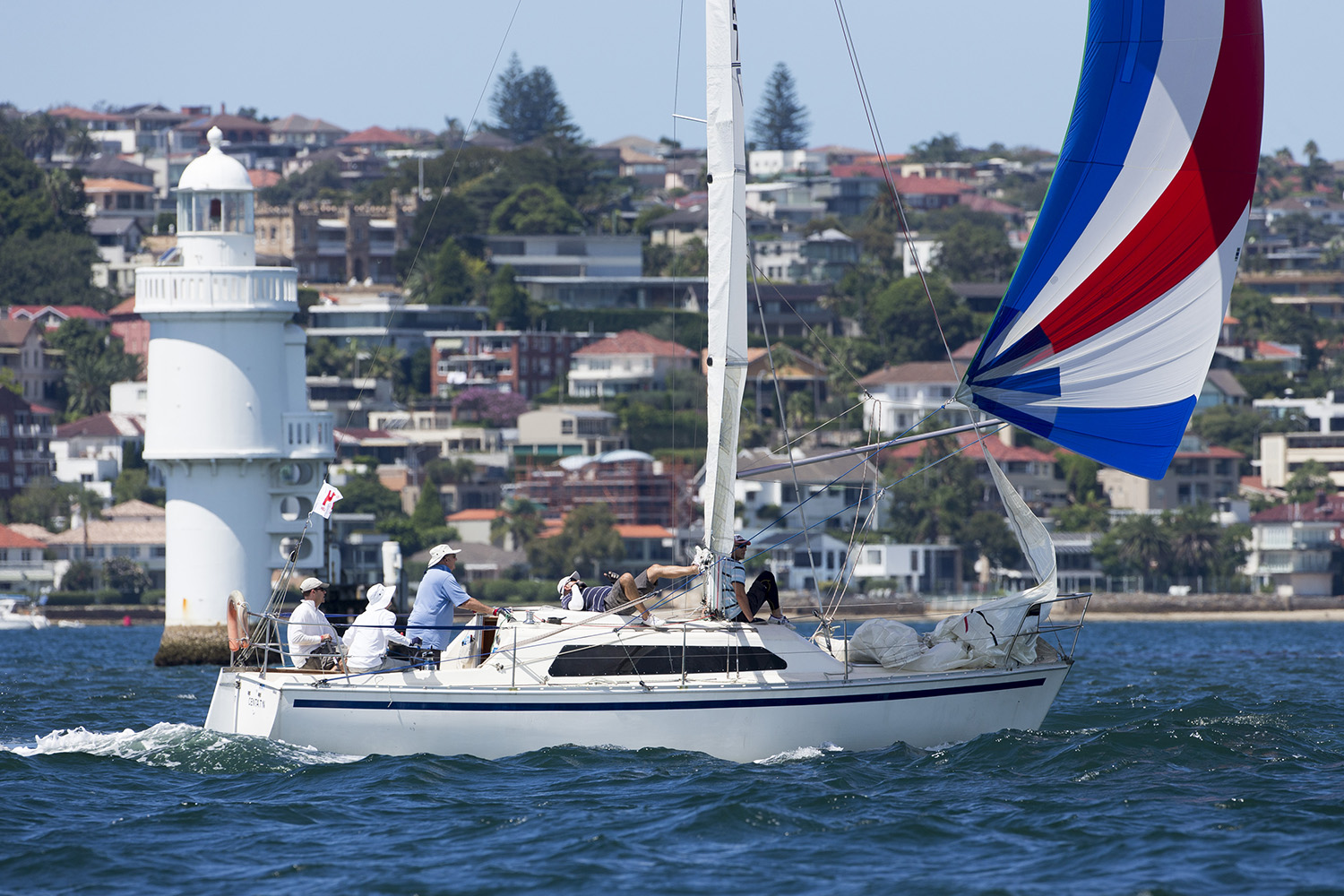 The wind gods put on superb weather for the 11th running of Middle Harbour Yacht Club’s 2016 Sydney Harbour Regatta today, and the crews on over 170 participating boats revelled in the 10-15 knot predominantly north-easterly winds under a sunny sky and up to 29 degrees temperature – it was tailor made for boat racing.

Andrew York rose to the occasion with Speedwagon in his defence of the VX-One Championship, winning three from three races in style today. The well-named boat had superior speed and her crew better boat handling skills. Only last year’s runner-up, Fred Kasparek’s Weapon of Choice from the ACT, was able to get within cooee of the leader, scoring a trio of second places.

“We got off the start quite well in all three races, but the gains were made in the swell, which our competitors aren’t used to sailing in, so that held us in good stead. There were big left and right hand shifts to overcome too,” York said this afternoon.

Lovely north and north-easterly winds beckoned crews. At around 10 knots for the midday start, York said, “There were gusts to 16 or 17 knots as the breeze increased through the day. We got a top speed of 16 knots out of the boat.”

Damien Widdy’s Finger Jam, all from Southport in Queensland. Widdy is new to the class, having purchased the boat out of New Zealand, but his crew sailed well enough to stamp their claim on third place in this exciting class.

Andrew York said numbers in the class were on the increase. “Particularly in Queensland; there are seven VX-Ones sailing out of there.

Reigning state champion, Hamish Jarrett and his ‘Miss Pibb’ kept the dream alive, two bullets and a third place giving him a one-point lead over triple Olympian Karen Gojnich (Evie) going into Day 2 of the Sydney Harbour Regatta. While Miss Pibb won the first two races, Evie struck back to take victory in Race 3, adding to her second and third places in the earlier two races.

Even though Peter Donnelly’s Flying Circus took out the opening race, Craig Mitchell’s defence of his Cavalier 28 NSW title got off to a good start, with Centaurius winning the remaining two races to lead the Championship by three points from David Brown’s Quattro, with Greg Purcell’s Scuttlebutt on equal points with Quattro in third place.

James all the way in J70 class

With reigning champion, Ray Entwistle (Jedi), having sold his boat which is now racing at this regatta as Javelin, the coast was clear for last year’s runner-up, Tim Ryan, who sailed James to three successive wins.

It was not as simple as it sounds though, as numbers are on the increase in the class. Eight yachts jockeyed for position on the start line in all three races, making for exciting starts and racing in general.

However, when the chips were down, Tim Ryan pulled out all stops and although it was a close finish in Race 1, after James crossed the start line early and had to return, he had clean wins in Races 2 and 3.

Ryan said after racing: “It’s great having more boats in the class; it’s the best boat I’ve ever sailed.”

Of James’ results he said, “We got a little in front, with everyone fighting out behind us. The races were very close and exciting. All the boats are going well, including the newer ones to the class and I think racing will be even tighter tomorrow.”

This is the first time Super 11’s have raced as a group in Sydney and it was exciting racing with a mix of Melges,32s, MC38’s and Shaw 10 and 11 metre boats.

With a strong north-easterly this afternoon, in time for the Historical 18’s handicap start from 2pm this afternoon, the race was always going to belong to John ‘Woody’ Winning, despite Aberdare being scratch boat. Winning has never made a secret out of his love of sailing in heavier winds, and today’s suited Aberdare down to the ground.

The PHS divisions make up a large percentage of the fleet at the Sydney Harbour Regatta. Mike Gallagher’s Galan is on top in Division 1, after a win and a second place, overcoming a challenge from Larki Missiris’ Buildrite/G&R Isuzu, which scored fourth place and a win. David Lees’ Farr ‘N Away is third, a further point behind, with a pair of third places.

For all other class leaders and full provisional results pending any protests please go to:  www.shr.mhyc.com.au/