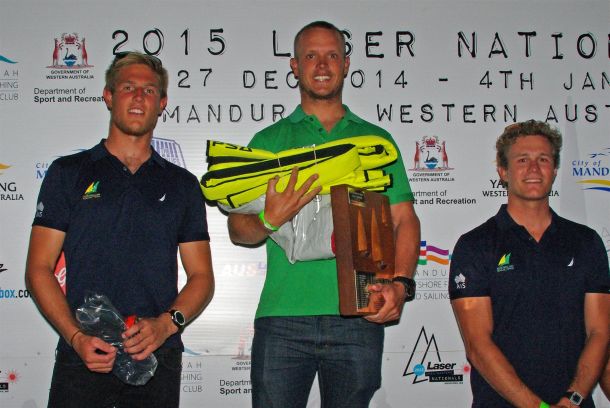 The sea breeze was a lot kinder on Sunday at the 2015 Open Laser Nationals in Mandurah. Instead of bolting in as it did on Saturday, it eased its way in and by 1 pm, the RO Ross Wilson had the Gold Radials in sequence and racing had commenced

In an all Western Australian affair twice radial world champion Tristan Brown has relinquished his hold on the Australian National championship with rising youth star Alistair Young sealing the regatta on the second last race. Conor Nicholas sailed very well to take third for the series.

In the radial silver fleet Harmon McAullay of WA took first followed by fellow West Australians (and Grand Masters) Andrew Whittell and Bruce Utting. Ashley Stoddart had two good races lifting her to 5th over all and is the leading female in radials. The top masters in the radial fleet are Mark Kennedy at 10th, followed by Jeff Loosemore at 18th and Craig Hughes at 20th.

With the Standards locked away for ISAF World Champion gold medalist Tom Burton, he took a rest day to prepare for the Moth Worlds in Sorrento, Melbourne. This left the door open for young WA gun Matt Wearne to take the last two races, clearly identifying himself as the prince in waiting for the top chair. Third was up for grabs and Ryan Palk of Queensland snatched it out of West Australian Luke Elliott’s hands by scoring a second while Luke scored a fourth giving them equal points to finish with. On count back Ryan took third. The Masters were led by Gavin Dagley at 13th, Grant Lovelady at 15th and David Whait at 17th.

The 4.7’s have succumbed to the attack of Brody Riley of Victoria scoring a relentless five bullets in the last five races ensuring that he was never in doubt. Caelin Winchcombe of WA sailed well over the series to finish with the same score as Jordan Makin of NSW and the count back gave the nod to Caelin. Zoe Thomson sailed well in the final two races and took 8th over all and first female 4.7 sailor.

The overall list of winners and their standings may be found at http://www.yachtingaustralia.com.au/site/yachting/event/65398/default.html

Race Officer Ross Wilson of Victoria was very complimentary about the consistent sea breeze that was enjoyed throughout the regatta and paid tribute to the race management team that had been assembled for the event. He also praised the efforts of the Mandurah Offshore Fishing and Sailing Club, the volunteers and staff who put together a magnificent event.