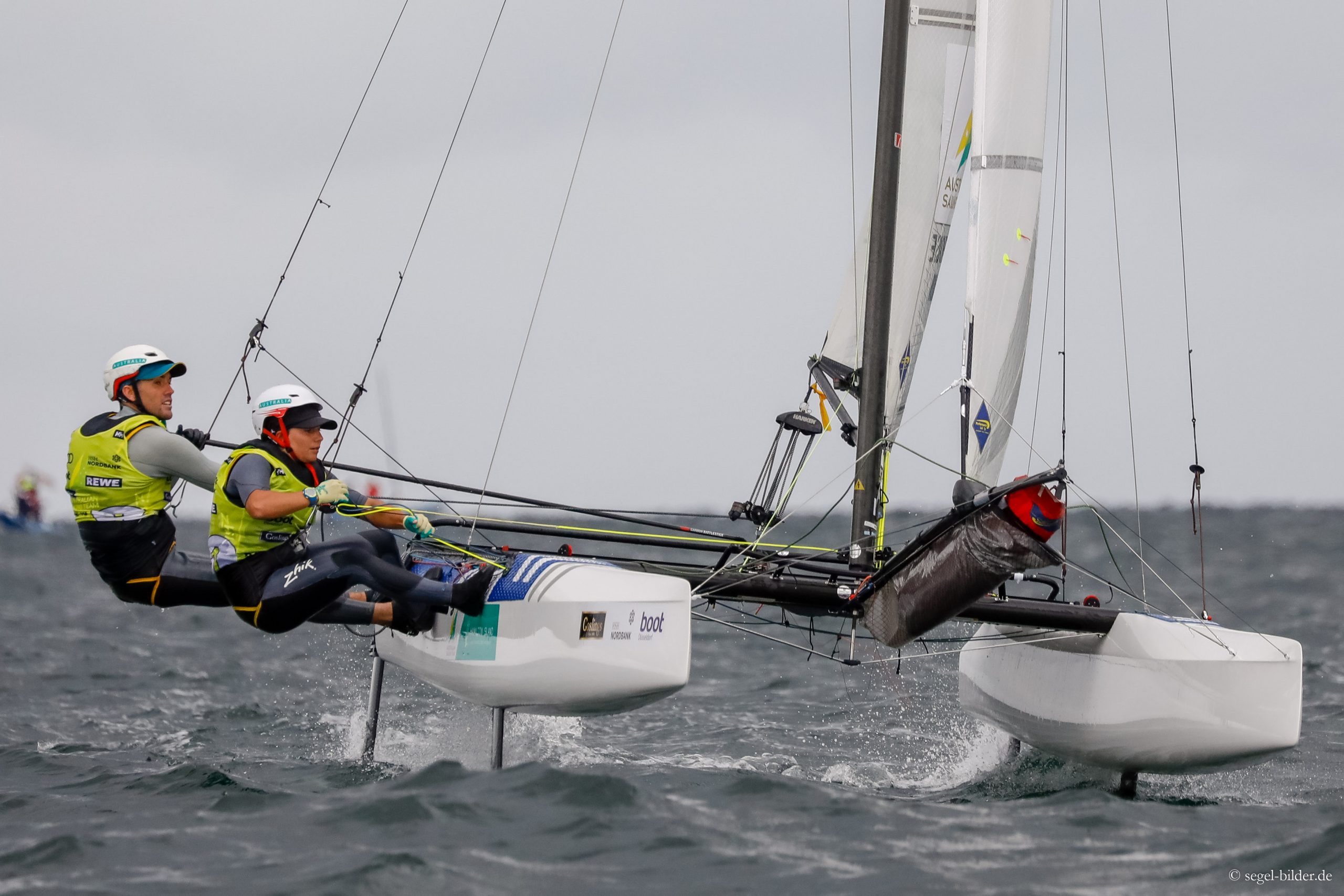 Sunshine one moment, rain the next, no wind, too much wind. It was a wild whacky day at Kieler Woche which suited some more than others…

Day 6 of Kieler Woche brought a bit of everything all at once. The weather was all over the place, making life extremely challenging not just for the sailors but for the race officers and their crews.

“If it was less than a 45-degree wind shift, it wasn’t worth tacking,” joked Will Ryan, crewing for Mat Belcher in the Men’s 470. Scores of 13,2 dropped the Australians down to second overall while somehow the men of 2018 – Sweden’s Anton Dahlberg and Fredrik Bergström managed to make sense of the climatic chaos to score two bullets and move into the lead.

After winning the European Championships and the Sailing World Cup event in Hyères, there is no fluke about the Swedes’ performance. But to win in such wildly unpredictable conditions shows just what a serious threat this team poses to Belcher and Ryan, the established favourites in the 470 fleet. Lying in third place are Kazuto Doi and Naoya Kimura, one of a number of increasingly world-class performances by Japanese sailors intent on glory two years from now when they compete on home waters at Tokyo 2020.

In the Women’s 470 it’s the local teams who are making the running, with Frederike Loewe and Anna Markfort leapfrogging fellow Germans and previous regatta leaders Nadine Böhm and Ann- Christin Goliaß. A 5,1 score for Silvia Mas and Patricia Cantero lifted the Spanish crew up to 5th after they were able to drop yesterday’s disqualification for starting too soon.

In the Men’s 49er, the ‘old men’ of the fleet – Federico and Arturo Alonso are showing the young guns the way round in what were really challenging conditions for the lively Olympic skiff. Two points behind them are Erwan Fischer/Clément Pequin from France. There a few Olympic medallists further down the field like 2008 49er Olympic Champion Jonas Warrer in 7th, Rio 2016 470 gold medallist Sime Fantela in 10th, and the bronze medallists from Rio Erik Heil and Thomas Ploessel back in 18th.

In the Women’s 49erFX, Odile van Aanholt and Marieke Jongens from the Netherlands lead by a point ahead of Tina Lutz and Susann Beucke of Germany, with the Kiwi Olympic silver medallists Alex Maloney and Molly Meech plugging away consistently for third place after five races.

It’s no surprise to find that the Netherlands leads in the Women’s Radial, although it’s not the reigning Olympic Champion because she’s not competing at Kiel in this week. In the absence of Marit Bouwmeester, another Dutch talent Maxime Jonker of NED leads with two bullets in her heats. Olympic bronze medallist from Rio 2016 Anne-Marie Rindom lies in second with 2,1 scores and Japan’s Manami Doi is also doing well in third place. Filip Jurišić of Croatia leads the Lasers ahead of Finland’s Karl-Martin Rammo with Britain’s Elliot Hanson in third overall.

Now 40 years old, British sailor Ed Wright just seems to get better and better in a class that’s considered one of the most physical challenges in sailing – Finn racing. Wright leads the fleet by 2 points from Hungary’s Zsombor Berecz and Andrew Maloney of New Zealand in third overall. Pieter-Jan Postma has been out of the class for a while but has slotted right back in at the front end of the fleet, the Dutchman lying in fourth overall.

The Rio 2016 Olympic silver medallists in the Nacra 17 Jason Waterhouse and Lisa Darmanin continue to hold the lead but it looks like fellow Australians Nathan and Haylee Outteridge are fast learners. After suffering a big crash with a Japanese boat on their first day in the Nacra yesterday, their second day of Nacra racing resulted in scores of 3,2. The Outteridge brother and sister duo are getting to grips with this tough boat in double-quick time. Behind Waterhouse in the overall standings are Britain’s John Gimson and Anna Burnet followed by Thomas Zajac and Barbara Matz from Austria.

This week is also the EUROSAF Parasailing European Championships. In the Hansa 303 fleet, Piotr Cichocki blotted his copy book of perfect scores with a UFD disqualification in race three for starting too early. Apart from that the Pole still looks like the man to beat with three firsts, although his compatriot Waldemar Woźniak came on strong today with scores of 1,2, moving him to second overall and dropping Germany’s three-time Paralympic medallist Jens Kroker down to third overall.

In the 2.4mR keelboat class, the battle for gold is shaping up to be a match race between reigning Paralympic Champion Damien Seguin and Heiko Kröger, with the Frenchman holding a one-point advantage over the German.

You can check out all the results here.