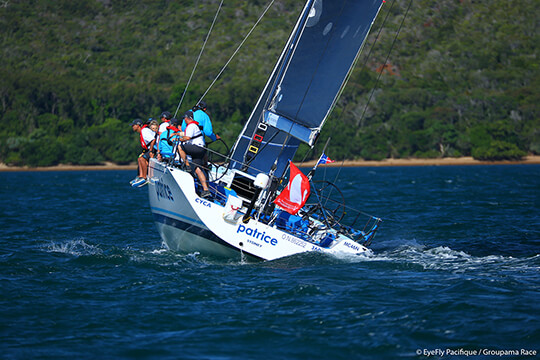 Tony Kirby dedicated his boat’s IRC and ORC win in the Groupama Race around New Caledonia to his mother-in-law, who passed away during the 654 nautical mile ocean race, the South Pacific’s premier offshore event.

“I’m ecstatic (about the win),” Kirby said at Port Moselle marina on Wednesday June 20, adding with emotion, “My wife Blis and daughter had to quickly fly out during the race because her mother passed away… it wasn’t unexpected. I’m going to call my wife in a minute and she’ll be so proud, she said to win for her mum.”

Patrice's Groupama Race video including an interview with Tony and his navigator Michael Bellingham.

For the Sydney based 46-footer, representing the Cruising Yacht Club of Australia, there was redemption having led the Sydney Noumea Yacht Race fleet for a good chunk of time, only to relinquish the corrected time win to their Aussie clubmates on Smuggler.

“Whenever Miss Scarlet slipped away we’d think about how to catch them – we never let them get away,” said Kirby. “That first day was beautiful smooth water sailing through the islands then the weather was always different and changed completely every 12 hours. It kept us on our toes, kept us thinking. Full credit to my crew for never giving up through ever-changing conditions. We damaged a few sails and we thought our race was done when we blew up our best spinnaker on the final morning.”

Bellingham, who slept an hour in three days, added, “The commitment from this crew was extraordinary. They spent almost five hours repairing the spinnaker, and that was the sail that brought us home.”

On the challenge of sailing in the South Pacific the respected Australian navigator added, “This island has lots of traps and secrets, and you have to keep your wits about you!”

Patrice’s crew boss Jason Rowed commented, “The breeze dropped coming home and we knew Ran Tan and Scarlet had stretched out so we thought ‘oh well we’ll just keep cracking on’. Then we got to the reef and had a really nice run through; that got everyone pumped. It was like a regatta windward/leeward from then on, everyone hiking 100%, trimming flat out and going as hard as we could.

“It was harder than the Sydney Hobarts I’ve done. It was so dark – you were sailing by feel at night – and bumpy and unstable, and the weather changed all the time.”

At the evening stage presentation of finished crews to the public Kirby added: “The local community have been so great to us, looking after us. This is not the last time you’ll see Patrice in Noumea, we will be back to defend our trophy, and we will try and bring more Australians with us!”

Thirteen boats have now wrapped up the sixth edition of the Groupama Race including the first multihull over the line and on handicap, Drew Carruthers’ Rushour (AUS) and second multihull, Antonio Pasquale’s Ave Gitana (NZL) skippered by Sharon Ferris-Choat and one of two all-women crews in the race, a first for the event.

On Wednesday night on stage Ferris-Choat made the announcement the Crowther 40 trimaran will continue on to Australia, to the Queensland series of race weeks with the owner sailing one and Ferris-Choat leading the other two.

Six boats remain at sea and the last in the fleet, SOCARE Odyssey (FRA), is due in the early hours of Sunday morning, June 24.