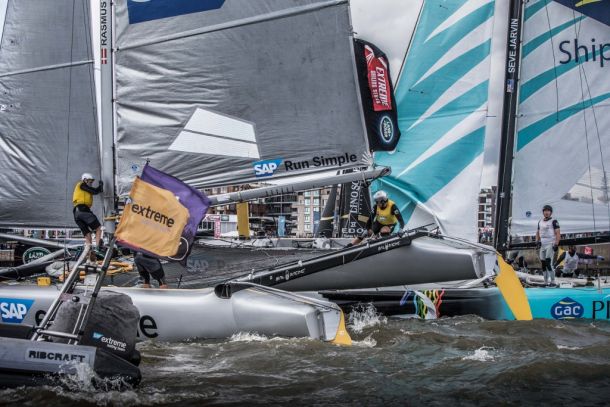 St Petersburg, 17th August – Team GAC Pindar go into this week’s St Petersburg leg of the Extreme Sailing Series ready to put the unfortunate incident that forced them out of action in Hamburg last month behind them and continue their strong progress in what has so far been a positive season for the British team.

With the damage to the boat now repaired and the crew feeling confident, GAC Pindar will be looking to kick on and continue their strong performances so far in 2015. In the 2015 series, they have already surpassed the number of first place race finishes they achieved from the entire 2014 series and recorded their highest ever finish in Cardiff finishing narrowly out of the podium spots in fourth place.

Commenting on the regatta ahead, Co-Skipper Seve Jarvin said: “We’re looking forward to getting back out there on the water and continuing the great progress we’ve made this year. It was frustrating not being able to finish in Hamburg as we were performing very well as a team. We’ve learnt so much this year and are now regularly putting ourselves in the position to compete at the top of the leaderboard, which is a great feeling for us.”

Team Principal Andrew Pindar commented, “We’re delighted to have the boat repaired and back on the water so the guys can continue their fantastic work so far this season. The improvements we’ve seen this year really validate the faith we are showing in the young sailors that we have on board as part of our team. From a Team Principal’s point of view, I couldn’t ask for more than the developments that we are showing both in terms of team performance, but also as individual sailors.”