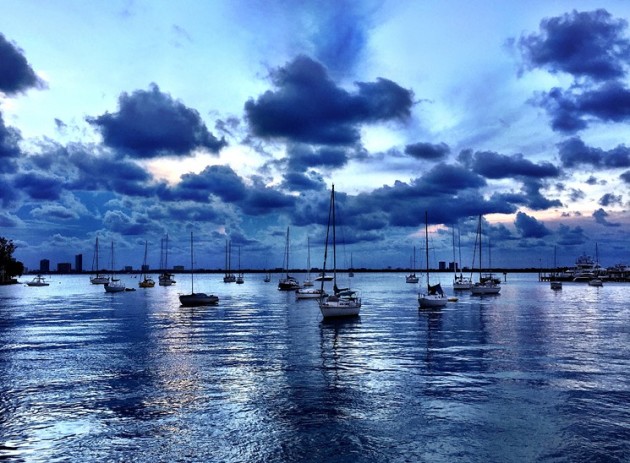 Karine Prudent was on her boat near the Venetian Causeway in Miami Beach this Tuesday morning when an officer pulled up alongside. “It's 10. Let's go!” he shouted.

Prudent, age 45, has been anchoring in a spot next to the Sunset Harbour condominiums with her teenaged son since 2014, when she escaped an abusive relationship and could not afford an apartment. But she was evicted this week as the city and state began a wave of enforcement against derelict and live-aboard vessels.

Prudent says FWC officers deemed her boat derelict because it could not move under its own power — neither the sail nor engine worked. She says she bought an engine, but it was too late.

Prudent is French and had nowhere to go after the boat was towed. She says the officer told her to try a shelter. “My son is 18 years old,” she said. “I can't leave him in a men's shelter!” She packed her bags and headed for Maurice Gibb Park at 18th Street and Purdy with her cat and dog until she could devise a plan.

Phil Horning, the FWC's  derelict-vessel-program administrator, told New Times last week that there are 250 to 350 derelict boats in the agency's database at any given time and that cities and counties also maintain their own list of these vessels.  He says that sometimes, boat owners “sell them for a dollar at the end of their lives instead of dumping them like they should. It ends up with somebody with no means and no money. They keep it until it sinks and then walk away from it.” Boats can look ratty as they deteriorate or become navigational hazards, especially if they sink.

Read the full story here, including laws about how long you can anchor in the bay.