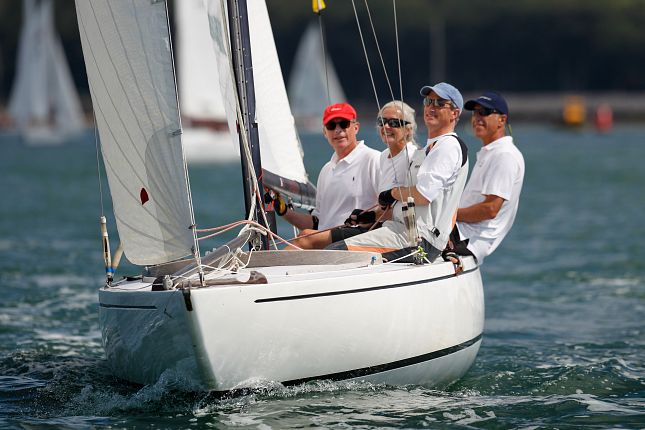 Cowes Week 2021 delivered a mix of interesting and exciting racing, with up to 40 races per day across 30 classes and Giles Peckham’s Daring Dauntless won the regatta overall for a record fourth time, having notched up five wins and one second place.

“It’s been a very classic Cowes Week, with light and strong winds, everything in between and challenging decision making,” says Peckham, who was sailing with his wife Jane and co-owner Richard Romer-Lee.

“We love the team work on board – everyone has their eyes out of the boat and we all contribute to tactics. They all did a tremendous job in keeping us at the front,” says Peckham.

“We also recognise the huge amount of effort the Cowes Week organising committee and the hundreds of volunteers have put into making this event happen over the last two years. They have demonstrated flexibility, innovation and have given us a fantastic week.”

Although Peckham dominated the front of Daring class, competition was much closer mid fleet. Five boats, for instance, finished the regatta separated by only five points.

“We’re a bunch of people who have sailed together for many years and also enjoy being sociable,” he says. “This year after racing it has felt more like Cowes Weeks of old and more geared to the needs of sailors – I like that.”

Peter Morton’s GP42 The Jean Genie also had a successful regatta, with victory in IRC Class 0. He also won two of Cowes Week’s most prestigious and historic trophies – the Britannia Cup and the New York Yacht Club Challenge Cup.

“Despite the challenges of this very unusual year, we’ve had a brilliant week’s racing,” says Regatta Director Laurence Mead.

“I think everyone has had some great times on the water and being able to see old friends again made it just like the old days. Huge thanks to the many volunteers from our nine constituent Cowes Combined Clubs and to the competitors for joining us. We will start working on the 2022 event on Monday.”

The Royal Corinthian YC of Burnham on Crouch took second place, with a team consisting of two Squibs and Christopher Agar’s Half Tonner Secrets.

Marian Kenna, racing the Morris M36 Chameleon of Cowes in the Club Cruiser class won the Ariel Trophy for Best Female Helm, ahead of Louise Morton’s Quarter Tonner Bullet. Morton picked up the trophy for the best all-female crew.

In the XOD fleet, 10 boats scored at least one podium result. Racing was typically close and tactical, with places 5 to 10, for instance, decided by only four points.

Roger Yeoman, Mike Moss and Chris McLaughlin’s Xcitation took a decisive victory in the opening race, two and a half minutes ahead of an otherwise tight race. However, they were not able to maintain consistency and fell to fourth overall at the end of the regatta.

Fraser Graham and Tim Copsey’s Astralita won the second race, following this with victory in the final two, winning the class by four points.

Other classes with very tight racing include IRC Class 2, where Adam Gosling’s JPK1080 Yes! had a close battle with two J/112Es – David Franks’ Leon and John Cooper’s Jooped. Third place in the final race for Leon was enough to win the series one point ahead of both Yes! and Jooped, who were tied on 12 points.

In contrast to the ultra-modern design of the Cape 31s, a traditionally built wooden boat won the Dragon class for the first time in decades. Bluebottle, HRH The Duke of Edinburgh’s former boat, raced for the first time in 60 years after a comprehensive restoration by Cowes boat builder David Heritage.

Raced this week by Graham and Julia Bailey, with Heritage also on board, Bluebottle won her first three races, discarded fourth on Tuesday, then finished with a pair of second places to win the class with a day to spare. Eric Williams’ Ecstatic took second overall, two points ahead of Gavia Wilkinson-Cox’s Jerboa.

In the Etchells fleet, Nick Stagg’s China White started with a fifth place, but followed it with an impressive unbroken string of firsts and seconds to end the week 9.5 points ahead of Rob Goddard’s Rocketman.

For all information, visit: http://www.cowesweek.co.uk