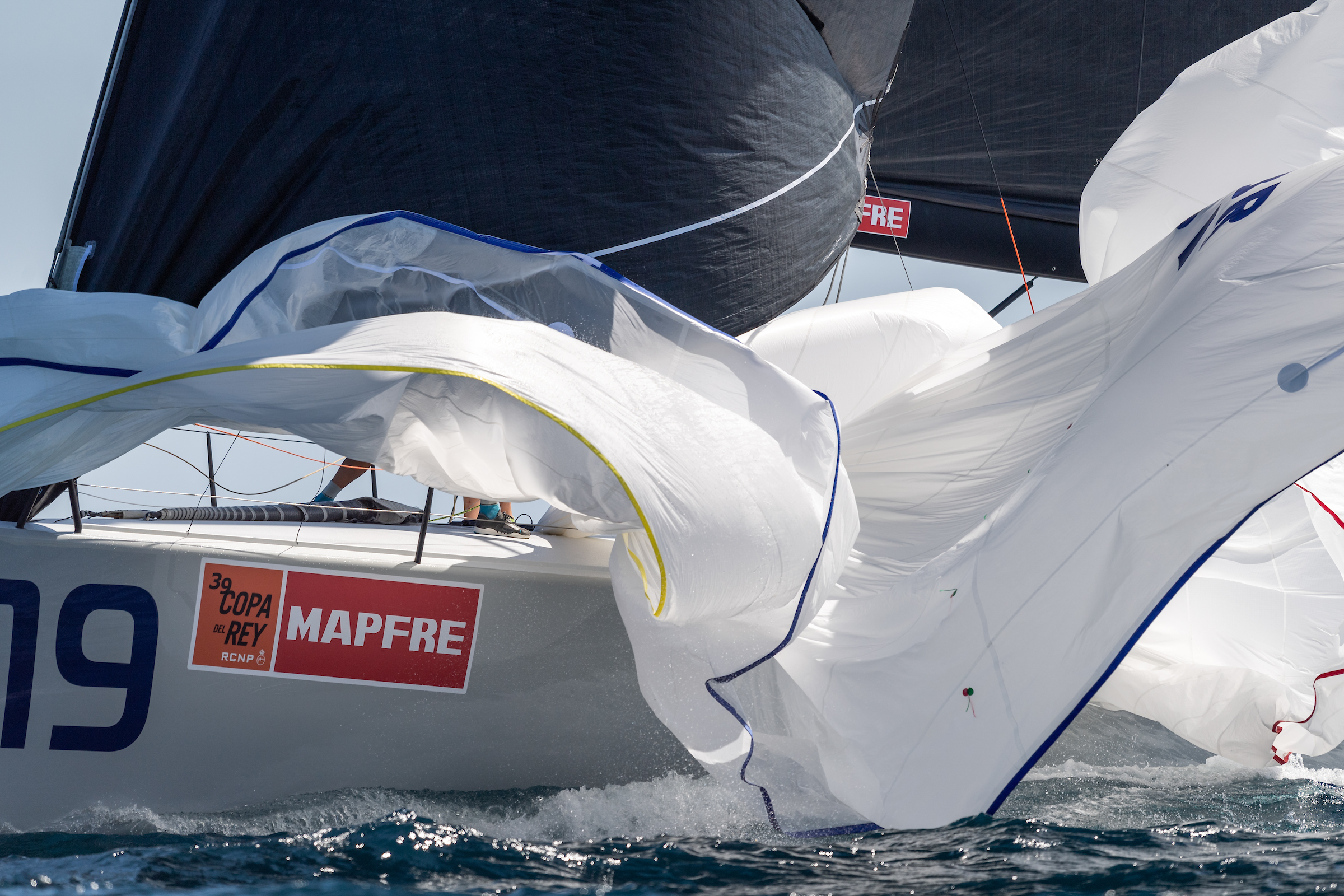 With just one race to sail at Palma’s 39 Copa del Rey Mapfre, Andy Soriano’s TP52 team on Alegre have all but secured the overall win in the IRC class, with another two hard earned wins in today’s light, shifty wind conditions on the Bay of Palma.

Soriano’s team cannot be caught, but the international crew, which is utilising the flagship regatta as an enjoyable, practical warm up for the first 52 Super Series regatta for 17 months, want to complete their second Copa del Rey class win on an appropriate high note.

Project manager Sebastien Tenghage (SWE) said, “The boat is going well. We are sailing it well, we are happy, but there is still a day tomorrow and we want to finish on the same note. We all like this regatta.

“Today was very difficult as the breeze was very shifty, tricky and puffy. You have to be on your game. It certainly is not as easy as it maybe looks on the scoreboard. All the boats here are a threat in these lighter winds. There was around 10 knots and it is so not the typical Palma ‘left corner pays.”

“Saying that, I think we all did a pretty good job on the boat getting the shifts right. And in terms of getting ready for the 52 Super Series in Portals, that was the long-term goal and this was the warm up before Portals, so I think we have achieved that aim.”

If the IRC division, which is mostly comprised of TP52s, is largely a done deal, the same cannot be said of the ultra-competitive ClubSwan 50 division. This is where Tom Slingsby and the hard-working crew of Hendrik Brandis’ Earlybird continued the consistently high level that has been their hallmark since the Finals section of the regatta started on Thursday.

Earlybird was second twice in the light, unsettled winds of 7-10kts and leads into Saturday’s final showdown by three points ahead of German rivals Hatari. Marcus Brennecke’s world champions had a fifth in the day’s first race, but bounced back to win the second. The crew, led by Markus Weiser and Michele Ivaldi, might reflect that in a straight-through series the title would already be theirs for the taking.

Hatari strategist, Ivaldi explains, “We have a lot of work to do tomorrow. It is a little frustrating because in a normal series it would be deal done, but here we are. But in certain senses it is all good. Everything is up for grabs.

“It was a really tough day with very light breezes and not a clear Palma day. I think that is because the gradient breeze was blowing straight into the bay and there was no real sea breeze and bend into the bay, that made it very challenging. If you can get a good start in these breezes, and get away, then you do well.

“The first race we paid a lot for the pin end of the line and it did not really pay. Second race we started mid line and got a better start. We used our speed and were able to stay ahead. But the guys on the red boat (Earlybird) are sailing really smart and really fast and so it will be full on. If they sail like they sailed today it will be really hard to beat them.”

Considering this is his first regatta in the ClubSwan fleet and, he thinks, perhaps his second ever visit to the Copa del Rey, Tom Slingsby has had a very positive effect on the team who are past Swan 45 world champions, many times winners here in the Swan 45.

Slingsby commented, “It seems we are pretty quick in the light stuff, no real reason that I can see if I’m honest, but we are getting clear lanes and that means we can play the game a bit.

“In the first race we got a really good start and were fast out the left and were able to cross and that was that. The next race we fought through. The boat is going well and the crew are sailing it well.

“One race tomorrow and four or maybe five boats can win. The top four are close, it will be light and so we need to get a good start and play the game from there. I don’t think we can focus on one boat.”

The strict owner driver class allows only three Group 3 crew. Slingsby explains a little of his approach to stepping up the teamwork: “I talk to the crew exactly the same way I would talk to a full pro crew.

“I explain to them the difference between the professionals and amateurs is no one thing, it is a lot of very small details, like moving the weight more accurately, it might be steering a little more accurately, trimming more accurately, we need to all work together to get better.

“I have seen 100 percent improvement. I see the way the guys are moving on the foredeck, and really conscious of their weight and movement. They are all very good sailors, and so maybe some different ideas, a different voice.

“It mightn’t be anything new, but a different way of looking at it, different motivation. We are a happy crew at the moment. All we wanted was to be in the hunt with one day to go and here we are, we are there!”

G Spot remains the overall leader in the ClubSwan 36 class, but Giangiacomo’s crew have a fight on their hands after Lorenzo Mondo’s Farstar posted two wins today to take them to within four points of G Spot’s eight points tally.

Natalia, the Romanian flagged champions of 2019 are on course to defend their title. Natalia Brailouiu’s crew are six points ahead.

In the BMW ORC Class 1, Fernando Léon’s DK46 is on the verge of winning the division after winning all four races of their Finals to lead by six points going into the last race. King Felipe has dropped to fourth on the TP52 Aifos 500. In the BMW ORC 2 division Javier Banderas Swan 42 Teatro Soho Caixabank is six points up.