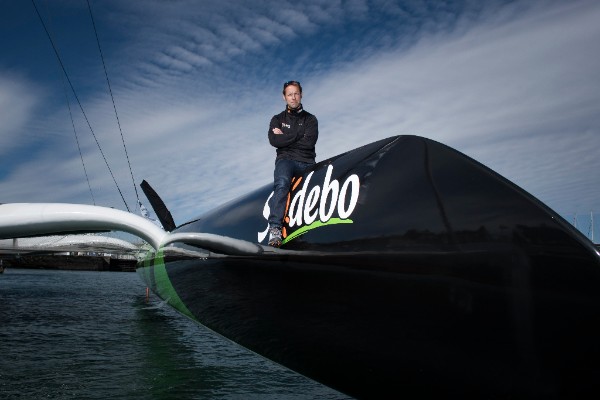 Thomas Coville, the hugely experienced skipper of the giant trimaran Sodebo, came within less than 10 miles of setting a new solo 24-hour distance record today as he raced on day three of The Transat bakerly.

The Frenchman had no concern for the record – which currently stands at 682 nautical miles – but was intent only on pushing his multihull as fast as he dared in his duel with his main rival in the Ultime class, François Gabart on board Macif.

However in the 24 hours to 03.00 BST today, Coville travelled 673 miles, just nine miles short of the mark set by his fellow French skipper Armel le Cléac’h on board the trimaran Banque Populaire VII in 2014. Sodebo and Macif are currently about 550 miles due south of Horta in the Azores and sailing a classic tradewind route across the Atlantic on their way from Plymouth to New York.

For much of the race the two skippers have been in sight of each other but are now about 40 miles apart on a north-south axis, with Coville just ahead.

Looking at the routing ahead, when the two skippers will have to climb to the west-northwest, as they close on New York for the finish, Coville said he will be off the wind for much of the time but warned that New York is where Atlantic depressions form and things could change.

“It depends what kind of low is being formed when we arrive,” he said. In the meantime Sodebo is in perfect shape. “I’ve been cleaning a few things – like my wet underwear – and today has been about recovery, so I have been eating and sleeping for a few hours which is fantastic,” said Coville.

Several hundred miles north of the Ultime battle, the three other fleets in The Transat bakerly – the IMOCA 60s, Class40s and Multi50s – are preparing for the onslaught of an Atlantic depression which is set to hit them tomorrow night and then dominate their first weekend at sea.

The now nine-strong Class40 race is still being led by Thibaut Vauchel-Camus on Solidaires en Peloton-Arsep, while the four remaining Multi50s are being led by Lalou Roucayrol on Arkema.

The remarkable feature of the IMOCA race has been the performance of Vincent Riou on PRB. The former Vendée Globe solo round-the-world race winner has managed to either lead or hold second place despite racing a conventional boat against two foilers.

At present Riou is around 10 miles astern of the class leader, the aforementioned Armel Le Cleac’h on the foiling Banque Populaire VIII, and six miles ahead of Jean-Pierre Dick on the foiling St Michel-Virbac.

Riou’s performance offers a fascinating insight into how the foiling IMOCAs and non-foilers will compare in this year’s Vendée Globe solo round-the-world race.

“To be honest I was not concentrating on the record at all,” said Coville after being notified of his near-miss with the record-books, as his boat continued its remarkable westward progress.

“I was really concentrating on running as well as possible and pushing hard to stay with Francois. It’s funny that this happened during a race and it’s nice to hear – it means that we have been pushing hard and it’s good,” he added.

“I am not really surprised by the speed I have been going – I am used to that. What I am very happy about, and amazed by, is the competition against Francois. We are close. Francois is faster in medium wind and light wind because his boat is new and lighter, but in stronger wind and reaching I think Sodebo is a fantastic boat. It’s amazing to be crossing the Atlantic in a race like this and be so close to each other. Yesterday was one of my best days ever racing multihulls – for sure.”