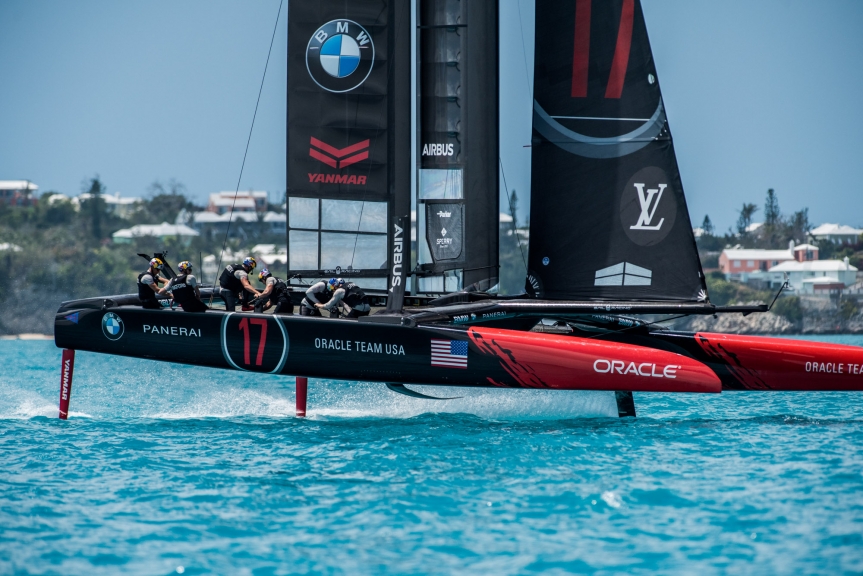 More America’s Cup Class (ACC) practice racing has been taking place on Bermuda’s Great Sound, now with all six America’s Cup teams taking part for the first time on the racecourse that will be used in the 35th America’s Cup.

Emirates Team New Zealand were the last team to arrive in the home of the 35th America’s Cup but quickly had their ACC boat re-commissioned and out on the crystal clear waters of Bermuda. Their first bout of unofficial practice racing with other America’s Cup teams was on Friday 28th April when they lined up against Artemis Racing and Groupama Team France with the Kiwis winning against the Swedes, albeit with Artemis Racing not engaging in the pre-start, and then failing to finish their first race against the French team but winning their second.

Emirates Team New Zealand skipper Glenn Ashby commented, “We learnt plenty today, but the main thing that sticks out is just how close all of the boats are in performance, and therefore how close the racing is going to be. It could very well come down to the finest design detail or smallest mistake on the water that is the difference between winning and losing at any stage of the competition.”

Notably, Artemis Racing continued their strong form, but over the four days of racing all six teams recorded victories.

Sir Russell Coutts, CEO of the America’s Cup, and the most successful sailor in America’s Cup history, had been watching the practice racing out on the water and gave this assessment, “This past week we’ve seen all six teams here for the America’s Cup out on the water. Definitely Artemis Racing are still the form team – if we were racing the America’s Cup today they’d have to be the favourite. The French have started to improve the control of their boat and we’ve seen some improvement from Land Rover BAR, and we’ve seen the introduction of some of the lightwind boards by some of the teams. “The revolution with this America’s Cup has been quite incredible but there’s still a long way to go with some of the teams in terms of their reliability. A lot is still changing. It’s too early to predict who’s going to be strong in this America’s Cup but the performance of the boats is incredibly impressive. We’ve certainly seen speeds of 47 knots, some even at 48 knots, so we’re getting close to that 50 knot (93kph) speed barrier.”