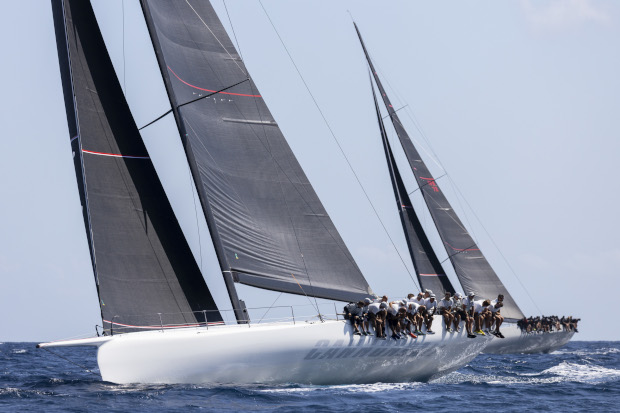 Cannonball on her way to victory - Studio Borlenghi pic

This year’s event coincides with the 40th anniversary of the International Maxi Association, the World Sailing-recognised body representing maxi boats globally and joint organiser of the Maxi Yacht Rolex Cup with the Yacht Club Costa Smeralda.

Ferrari and his Italian team scored a come-from-behind victory after Jim Swartz’s Vesper led on day one and Sir Peter Ogden’s Jethou also claimed two races along the way. The slippery Cannonball also won two races and her consistent score line, with no finish off the podium, resulted in her winning the title by three points.

“I am very happy for the team,” said Ferrari, who has been racing in Sardinia since 1985. “It was a very nice regatta, the place is beautiful, and the boats are exciting. Winning was definitely a challenge, so you can only be happy. We have been training a lot. The boat is important as we have made many changes to her.”

“It has been great. We worked hard and the team did a great job,” he said. “Maxi 72s need a lot of tuning time and obviously the budgets are expensive, so you have to find the right balance to be successful.

“This week we got all sorts of conditions and we used our entire sail inventory. The boat is great thanks to Botin Partners [Cannonball’s designers] – Cannonball is a good all-rounder. Everything is super well optimised after three years.”

Also significant today, sailing a coastal course that took the fleets off on an anti-clockwise lap of La Maddalena, including a long run down Bomb Alley, was the victory for the new Maxi 72 Bella Mente owned by American Hap Fauth.

Along with Peter Harrison’s Sorcha, Bella Mente got off to an excellent start and then never looked back: “We’re getting there with new boat – usually it takes a season to get them going,” said Fauth.

Of today’s racing he added: “The boat felt good. We did what we planned to do – win the start and, once we were out, had really good boat speed. You just don’t want to get caught up in traffic. We got in sequence with the puffs and off she went.”

It was the Wallys turn to sail windward-leewards. Going into today it was very close between Lyra and David M. Leuschen’s Wallycento Galateia. Ultimately Lyra won both today’s races, successfully defending her title by three points. “It was very tight with Galateia,” observed

Lyra’s Chinese-Canadian owner, Terry Hui, who won the Wally class here on his first attempt in 2018, has since been learning rapidly from Lyra's all-star crew of America’s Cup, Volvo Ocean Race and Olympic sailors.

Lyra’s tactician, Hamish Pepper, explained: “We won the first race quite easily, but it still meant we were only two points ahead of Galateia. Going into the last race there were tricky conditions, at one point we were first and then third. Had we been third and Galateia won the race, they would have won on countback…”

With her arch-rival Topaz not racing due to technical issues, Velsheda was left to win the Super Maxi class comfortably: “It was a great week,” Velsheda’s owner Ronald de Waal said.

“Porto Cervo is my favourite place to race – with the scenery, there is always wind and going around all these rocks and all the beautiful views is very nice. It was a really pity Topaz dropped out but we used the time to practice. We hope they can get their boat fixed so we can see them again in St Tropez.”

There was a surprise victory in the Maxi Racers when a third bullet today for Irvine Laidlaw’s Reichel/Pugh 82 Highland Fling XI, caused them to draw level with George David’s Rambler 88 and win on countback.

Laidlaw said he was pleased “particularly because the last time we sailed the boat was at the Maxi Yacht Rolex Cup two years ago. We got it out for this event and we managed to win.”

It also marks a re-ignited love affair with his yacht. “This boat you can throw around and is such fun. In the 80-85ft range you still get all the speed – it is a great size.”

Tactician Cameron Appleton added: “Today the course suited our style of boat more than Rambler or Leopard and today we probably sailed our best race as a group. It is a fantastic boat. We had a lot of fun. Irvine does a phenomenal job steering.”

Another surprise winner was Argentinean Juan Ball’s Swan 90 Nefertiti in the Maxi Cruiser-Racers. This came after the favourite for the class win, Vera, belonging to another Argentinean owner, Miguel Galuccio, was unable to sail due to a broken rudder.

“We finished first today and were very lucky that all of the planets aligned so we ended up winning the championship as well,” said Ball, who has competed at the last five Maxi Yacht Rolex Cups. “On the first day we finished fifth and it looked impossible that this would happen.”

“It is a great feeling,” said Lacorte. “Today my crew and SuperNikka gave their best on every leg, fighting side by side with all the other competitors, especially Spectre. Winning today was due to our tactics and our boat speed and the crew not making any mistakes.”

Racing on board today was Carlo Puri Negri, owner of Atalanta II and winner of last year’s International Maxi Association Mediterranean Maxi Offshore Challenge. Lacorte will race SuperNikka next year but is part of a consortium of owners set to build a series of 77-78ft race boats.

Hanging onto the Mini Maxi Racer-Cruiser class win – just – was Bostonian Stephen Cucchiaro’s Swan 601 Flow. Success nearly slipped through the US team’s fingers, as Cucchiaro explained: “We got behind after the first shift and it took so long to catch the other boats – that wasn’t until the finish line and it wasn’t enough for the corrected time.

“It was a very tough race and it was a reminder of how good the competition is. That where we were able to take firsts is really a tribute to my crew who have been fantastic all week.”

There was further upset today among the Mini Maxi Cruiser-Racers where Riccardo de Michele's Vallicelli 80 H20 won her second consecutive race today to draw level on points with Marietta Strasoldo's Swan 651 Lunz Am Meer, which had been winning all week.

With three bullets this week to Lunz am Meer's one, H20 won on countback, to claim her third successive victory in the Cruiser-Racer class at the Maxi Yacht Rolex Cup.

De Michele commented: “The fleet this year was much more competitive. Usually we only have one or two boats to compete with instead of four or five this year. Lunz Am Meer was the most 'dangerous', as she has a very low rating and is very well sailed. Personally I love coastal races – they are my passion over windward-leewards, even though we won one.

“I am very happy with my team manager Stefano Leonardi. He has been working with me for the last 10 years over which time I've had nothing to worry about!”

At the prizegiving on Piazza Azzurra outside of the Yacht Club Costa Smeralda, Y3K owner and former International Maxi Association President Claus-Peter Offen was awarded the Commodore Alberini Perpetual Trophy for sportsmanship.

Andrew McIrvine, Secretary General of the International Maxi Association commented: “This has been a very special and successful edition and my thanks once again go to Rolex for their valuable support.

“The weather provided the broadest variety of conditions and the competition was closer than ever with many classes decided on tie-breaks. The prizegiving was full of tired but happy sailors. It was a fitting event to celebrate the 40th anniversary of the International Maxi Association.”