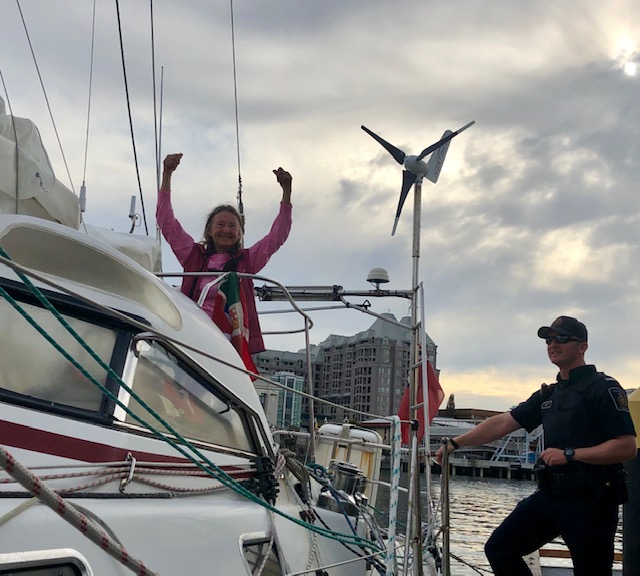 The Ocean Cruising Club (OCC) is pleased to announce that member Jeanne Socrates has sailed into Victoria BC harbour on the 7th of September after successfully completing another single-handed unassisted nonstop circumnavigation. Jeanne set sail from Victoria on the October 3, 2018, on NEREIDA with the intent of becoming the oldest person to sail alone around the world.

NEREIDA had severe mainsail damage in the Cape Horn area which took a long time to repair, suffered a knockdown SW of New Zealand after which she had to enter Timaru Bay in NZ to make repairs, and later lost her headsail in the North Pacific.

Jeanne’s single-mindedness and determination to complete this voyage has culminated in a successful conclusion and she received a warm welcome back from many of her local supporters. All OCC members offer Jeanne their congratulations and Bravo Zulu!

OCC Member Shaun Peck wrote, “Jeanne and NEREIDA eventually made it after many hours of delay and arrived at Victoria harbour at about 5 pm PST on Saturday September 7. It was remarkable to see her walk down the dock after nearly a year at sea. She then spoke to the large crowd who were there to greet her. Her achievement as the oldest person (she is 77) to sail non-stop without engine around the world is an inspiration to older people, and in particular as the achievements of an older woman. Thanks to Daragh Nagle for the patience to wait (she was first expected to possibly make landfall three days earlier) and to present the OCC congratulations.”