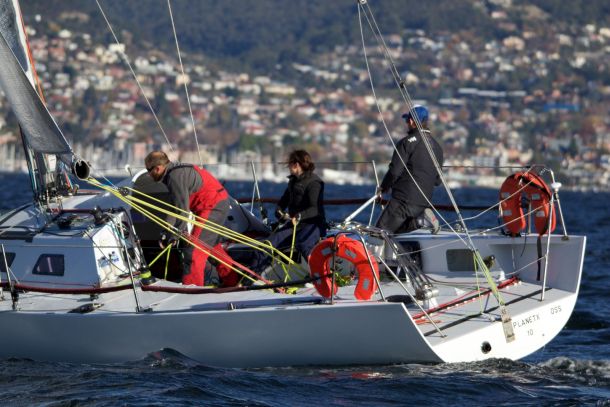 Countbacks were needed to decide the overall winners in three of the six divisions after Sunday’s fifth and final race in the Derwent Sailing Squadron/Quantum Autumn Short-Handed Series.

Instead of the forecast 10 knot breeze on the River Derwent, the race started in a 25 knot northerly, gusting to 29 knots and proving too much for several of the boats sailing with just a crew of two. Quite a number of boats elected not to carry spinnakers.

A win by Trouble (Dave Willans) in the final race for Division 1 (two-handed spinnaker) forced a countback with Saga (Chris Sheehan) with Saga taking the honours with a 1-2-2-4-(4) scorecard against Trouble’s 3-3-(5)-2-1. Third overall went to Fish Frenzy (John Wearne).

In Division 5 (SB20s, two-handed spinnaker) the top race 5 points for the series-entered boats went to Brainwave (Scott Brain) which tied her with Hypertronics (Stephen Catchpool) on 6 points. However, Brainwave’s series of 2-(4)-2-1-1 gave her first place overall against Hypertronic’s 1-(3)-1-2-2, the two seconds being the decider. Third overall was Karabos (Nick Rogers).

Biggest winning margin in the Autumn Short-handed Series was a 10 pointer by Rotary (Norm Brundle) in Division 3 (two-up, non-spinnaker). Rotary notched up a fine score of 1-4-6-2-1 to comfortably win from Dynamo (Stephen Davidson) and Mon Amie (Phil Conyard).