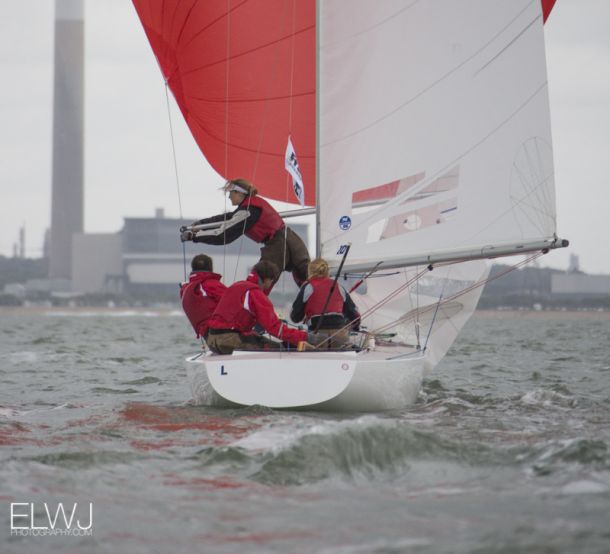 Cowes, UK, August 5, 2015 – An action-packed finish in the final race determined the overall result of the Etchells Invitational Regatta for the Gertrude Cup.

On the final approach to the pin end of the line, five boats were overlapped on port tack, when a boat on starboard forced them all to tack. Some squeezed past the correct side of the mark, but others were pushed outside the line and had to gybe clear.

This left the top three teams tied on 30 points after 10 races. Mark Thornburrow of the Royal Hong Kong Yacht Club took first overall on count back thanks to two race wins. Second overall was Jeanne-Claude Strong of the Royal Sydney Yacht Squadron, thanks to her win in the penultimate race. Tom Carruthers of San Diego Yacht Club, who sailed a consistent series without winning an individual race, took third.

The competition was incredibly tight throughout the event, with seven different winners over the 10 races, while more than half the fleet scored at least one podium result. At the other end of the scale, the smallest misjudgement could cost many points and every team finished at least one race near the back of the fleet.

The final day of racing delivered four intense races in a light to moderate south-easterly breeze with big shifts, lulls and gusts. The conditions, which provided many opportunities to slide down the fleet, or recover ground, proved difficult to read even for the many world-class sailors, including five world champions, in the fleet.

Thornburrow and his crew of Laurence Mead, Libby Watkins and Lauren Mead started the day as overall leaders, with a three-point margin. However, they had a disastrous first race, finishing 11th in the 16 strong fleet. That gave the benefit to Strong, who finished the race in third place. She then immediately lost the advantage by scoring 12th in the second race of the day, but recovered with a win in the next to remain in contention.

Tom Carruthers, the current Etchells North American Champion, of the San Diego Yacht Club had a better start to the day, with a second and fourth place. He followed this with an eighth in the penultimate race, a result he was able to discard. He and crewmembers Andrew Palfrey, an Etchells world champion and America’s Cup coach, and Chris Busch held the overall lead going into the final race, with a three-point advantage on Thornburrow, while Strong, the Etchells Australasian Champion, was just one point adrift in third overall.

The final race, sailed over a five-mile course, saw a dramatic game of snakes and ladders playing out on the water. However, before the fleet got away competitors were kept on edge as two huge windshifts during the start sequence forced a pair of starts to be abandoned while the line and course was reset.

The race started in a gentle east-south-easterly of 8-10 knots, however as the leaders approached the leeward gate on the first lap, a new wind, shifted 20-30 degrees to the south and significantly stronger closed up the fleet. Jan Muysken of the Emirates Palace Yacht Club, crewed by David Bedford and Mark Lees, led a tight group of boats around the strongly favoured right-hand gate. However, despite having had a good first beat, Strong had dropped to the back.

Principal Race Officer Phil Lawrence was on top form, setting a new windward mark to reflect the new wind direction in double-quick time and giving the fleet another perfect beat that continued to challenge competitors. By the start of the final beat Jeremy Thorp of Antigua Yacht Club, last year’s overall winner, held a lead of five lengths over Doug Flynn of the Cruising Club of Australia, and his crew of Steve and Seve Jarvin, with Muysken a further five lengths further back.

Flynn crossed the line first, followed by Thorp. Anthony O’Leary (winner of last year’s RORC Yacht of the Year award), Robert O’Leary and Julia Bailey (winner of the Dragon class’s prestigious Edinburgh Cup) of the Royal Cork Yacht Club took third place, all three finishing clear ahead of the drama that was about to unfold behind them.

A number of boats approached the pin just below the port lay line, including Thornburrow and Strong. Approaching on starboard tack, Carruthers was forced to duck behind a couple. However Jamie Clarke, of the Royal Thames Yacht Club took a more aggressive approach, forcing a five port tack boats, including Thornburrow and Strong, into a quick tack.

“We had the benefit of being in a controlling position over the boats on the left hand side of the course when the trouble came and it worked out for us,” Strong’s tactician Neville Wittey explained. Carruthers came out badly – scoring a 10th place in the race – while Strong finished fourth and Thornburrow fifth, leaving all three tied on 30 points at the end of the regatta.

“It’s been a very challenging event,” says Thornburrow, “with everyone having both good and bad races. It was difficult to judge the laylines in the tide and then there were the massive wind shifts and changes in pressure in the last race. Phil Lawrence’s race management was fantastic – he set great courses on a difficult day, without keeping us waiting.”

Next year’s Etchells Invitational Regatta will take place in Cowes from July 30 to August 3. Anyone interested in more information, or receiving an invitation, should contact David Franks at davidfranks80@gmail.com. It will be followed by the class European Championships from August 26-29 and the 2016 World Championship from September 2-9.