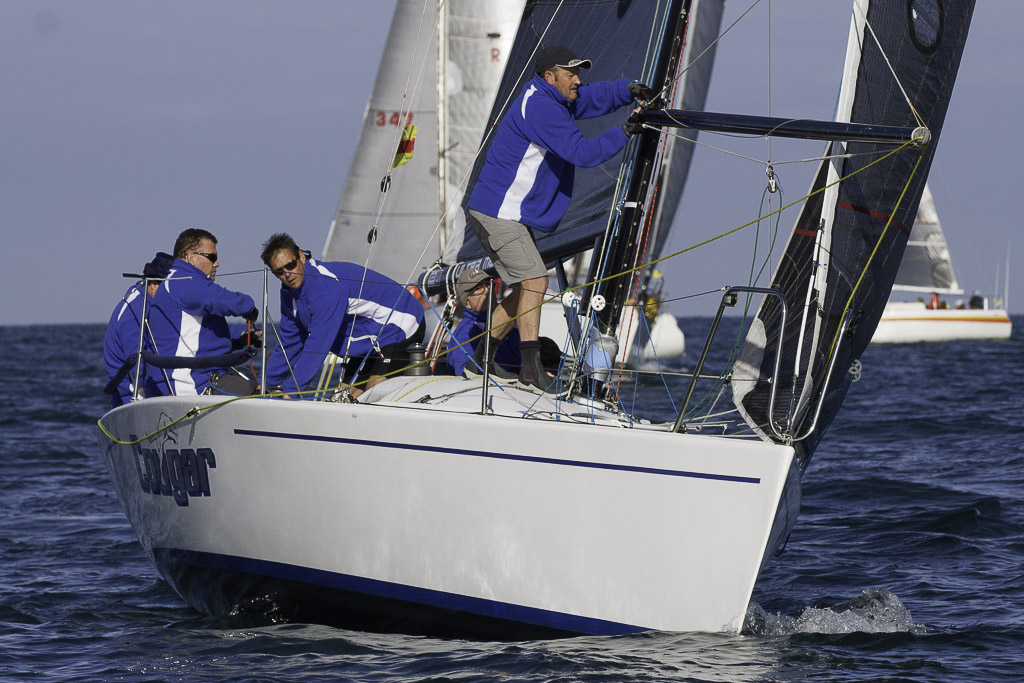 Cougar sets up for kite launch at the first mark. Photo Bernie Kaaks.

In conditions that could hardly have been more different, Fremantle Sailing Club conducted both the Mayflower Race and the resail of the Ensign Race on successive days last weekend.

The Farr30 Cougar finished the weekend with two fastest times and two IRC firsts in a masterful display by skipper Scott Glaskin and his crew. In trying conditions on Saturday, sloppy seas, freezing temperatures and occasional showers, the Mayflower Race was everything one might expect from the Valmadre winter series on the west coast. On Sunday however, sailors left the marina with the mercury well below five degrees, but light winds, flat seas and brilliant sunshine soon lifted the spirits and crews returned to the clubrooms in excellent spirits after another day of close competitive racing. Cougar’s versatility in the differing conditions will make the yacht very difficult to beat in the IRC Division 2 fleet.

In Division 1, Paul Arns’ consistent Obsession finished the weekend with a pair of seconds on IRC. Dave Walling’s The Next Factor claimed first place on Saturday, after finishing narrowly behind Alan Stein’s GP42 Dirty Deeds. Anthony Kirke and Alan Nuttman were delighted with the performance of Enterprise in Sunday’s light winds. Often playing second fiddle to sister The Next Factor, the Farr 40 shot out of the blocks smartly to establish an early dominance. Under spinnaker, Enterprise lost much of her early lead and it seemed that once again she might surrender to her rival. In the end, Enterprise pulled away to record line honours and third place on IRC, adding to her third place the previous day.

The level of competition under YAH handicap continues to be as close as ever. When the first three division 2 yachts finished with corrected times within 28 seconds of each other, the talent of offshore handicapper Ross Dennis continues to amaze. In the Valmadre Offshore series last Saturday, the Division 2 YAH trophy was won by Bill Henson’s Circa with a margin of just two seconds over Jamie Weeden’s Wild Bull with Cougar a further 26 seconds away in third place. Quite a remarkable result after five hours of racing in bitterly cold and rainy conditions.

In Sunday’s Ensign Race, Circa followed Cougar over the line to record third place on YAH, behind winner Prime Factor and second placed Wyuna and once again the first three were separated by less than three minutes on corrected time.

Only three boats contested the double handed division. Alison Stock’s Selkie won first place on IRC on both days and in the absence of double handed specialist Kraken, looks like the boat to beat in this Valmadre Series.

The final race of the Valmadre Series is scheduled for 6th August.