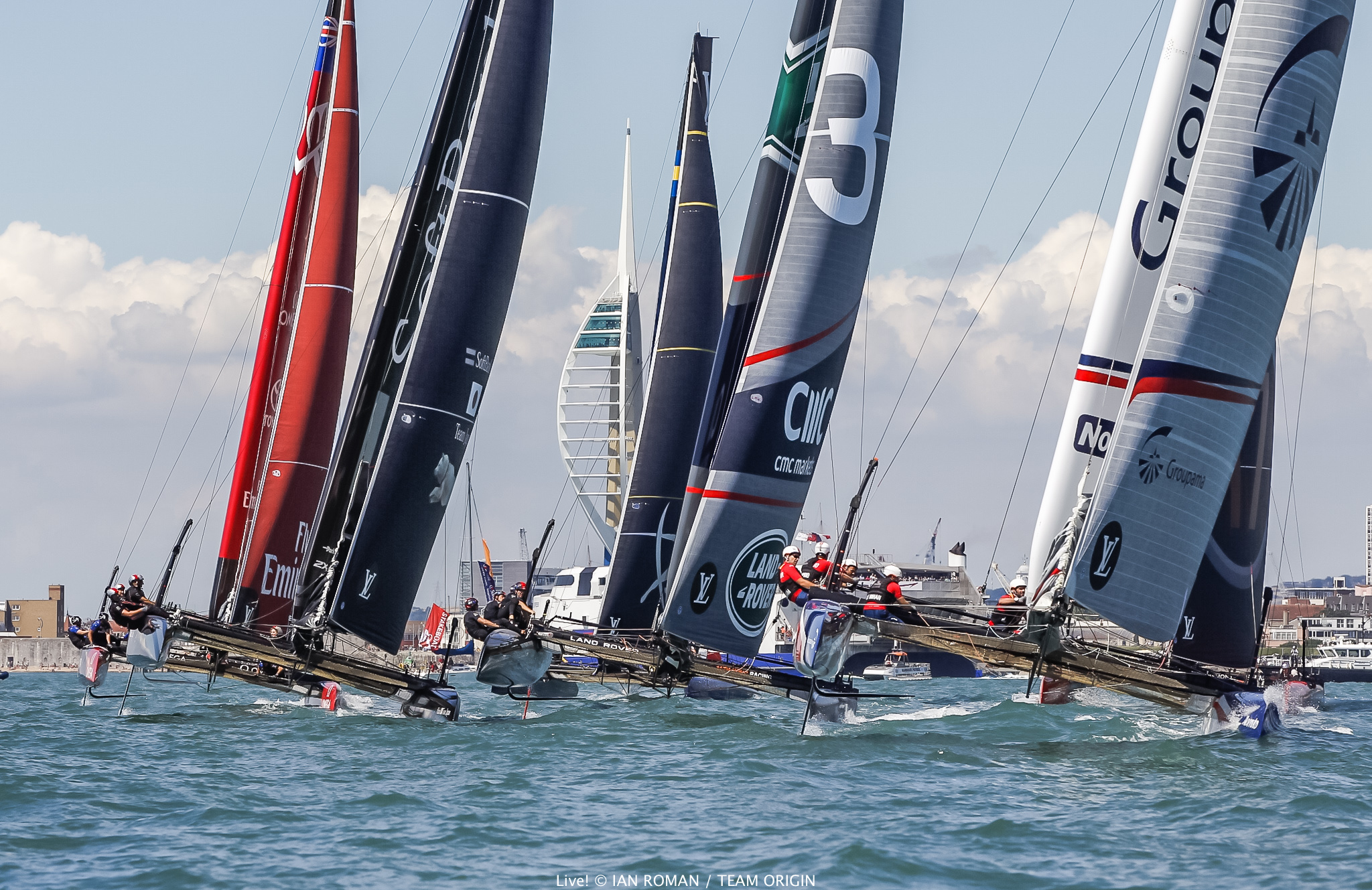 Hot, sunny conditions and thousands of fans lining the Portsmouth seafront was the backdrop to Saturday’s crowd-pleasing Louis Vuitton America’s Cup World Series action, the first day of points scoring races on the Solent at the 2016 event.

The home team, Land Rover BAR, led by skipper Sir Ben Ainslie, recovered from a poor first race result to win the second two contests and complete the day at the top of the leaderboard, much to the delight of the tens of thousands of cheering fans lining the shorefront.

“We wanted to perform well in front of the home crowd to give them something to cheer for – it’s an extra impetus. We’ve been training hard, preparing thoroughly and the guys are really fired up for it,” said Land Rover BAR skipper Ben Ainslie.

“It was very tight racing in quite light and difficult winds. We got caught out in the first race, we were in a strong position and then got stuck with Japan and both of us sailed ourselves to the back of the fleet from second and third which was really frustrating.

“But I was pleased with the way we regrouped for the final two races. We fought hard and kept going to come away with two wins; and to top the day in such difficult conditions at our home event was a great effort.”

At the start of race one it was Land Rover BAR and Groupama Team France who led the pack, Softbank Team Japan in third and Artemis Racing, ORACLE TEAM USA and Emirates Team New Zealand all incurring penalties as they crossed the start line fractions of a second too early. The French team made a tactical decision heading to Gate 2 that really paid off and quickly built a good lead. The battle behind the French was fierce, with boats making contact as the light conditions tested the crews to the limit, but at the finish line it was Groupama Team France in first, ORACLE TEAM USA recovering to second and Emirates Team New Zealand in third. Behind them, a drag race for fourth between Softbank Team Japan and Land Rover BAR was finally settled in favour of the Japanese on a photo finish, with Artemis Racing bringing up the rear in sixth.

Race two was another penalty-fest at the start, with every team except Groupama Team France incurring penalties for crossing the line before the gun, but the pack quickly caught up with the French team and at the bottom mark the home crowd went wild as Land Rover BAR took the lead. Ben Ainslie’s crew strode into a huge lead, and from that point they put on an America’s Cup racing masterclass, making the best use of the light winds to finally finish first, over a minute ahead of ORACLE TEAM USA, who again fought back from a poor start to finish in second. Behind them, Softbank Team Japan finished third, Groupama Team France in fourth and the two boats with new helmsmen in Portsmouth, Artemis Racing and Emirates Team New Zealand crossing the line in fifth and sixth respectively.

The third and final race of the day saw another good start for a French team who were the standout performers on the start line today. Land Rover BAR kept up their race two form, but both ORACLE TEAM USA and Softbank Team Japan again incurred startline penalties and were playing catch up from the start. The Japanese team, under the leadership of Dean Barker, made up ground impressively and were right with Groupama Team France at the halfway point of the race, battling with Land Rover BAR for second as the French inched ahead.

However, an incredible fight back from Ben Ainslie’s British boat saw them overtake the French boat at gate 3 and then they found themselves stuck into a huge battle with Softbank Team Japan as they sped towards the final leg. Finally it was another win for Land Rover BAR, an impressive second for Groupama Team France, third for Softbank Team Japan, fourth for Emirates Team New Zealand and Artemis Racing and ORACLE TEAM USA in fifth and sixth places in the final race of the day.