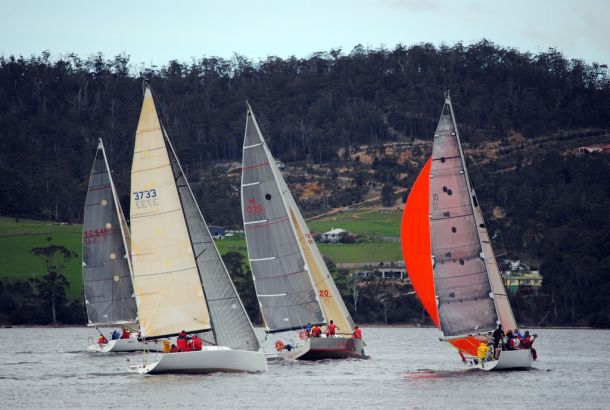 The course for the Cock of the Huon takes the fleet past picturesque hills surrounding the Huon RIver. Photo Peter Campbell.

The TP52 class yacht is among more than 30 yachts entered for the night race, starting from Hobart’s Castray Esplanade at 7pm and finishing just south of Gordon on the D’Entrecasteaux Channel later tonight.

“We will continue down the Channel after finishing at Gordon to give the crew their first full night of sailing as we prepare for the Sydney Hobart, “ said skipper Lyall, a Beaconsfield-based GP who sails out of the Royal Yacht Club of Tasmania in Hobart.

“Our program leading up to the Sydney Hobart includes the Maria Island Race in mid-November and then the CYCA’s Passage Race Series in December.”

While Cougar II sails on during the night after finishing the race from Hobart to Gordon, most of the fleet will motor down to the Kermandie Marina at Port Huon.

Tomorrow afternoon they will contest the traditional Cock of the Huon race on the lower reaches of the Huon River off Port Huon, starting and finishing off Shipwrights Point.

As the name implies, the Ronald Young & Co Builders-sponsored Piper Opener is the traditional pre-season regatta for yacht racing with clubs based on the River Derwent at Hobart, on the D’Entrecasteaux at Kettering and on the Huon River at Cygnet and Port Huon.

The official Opening Day for the season of 2016-2016 will be on Saturday, October 10, with a Sail Past off Hobart’s Sullivans Cove.