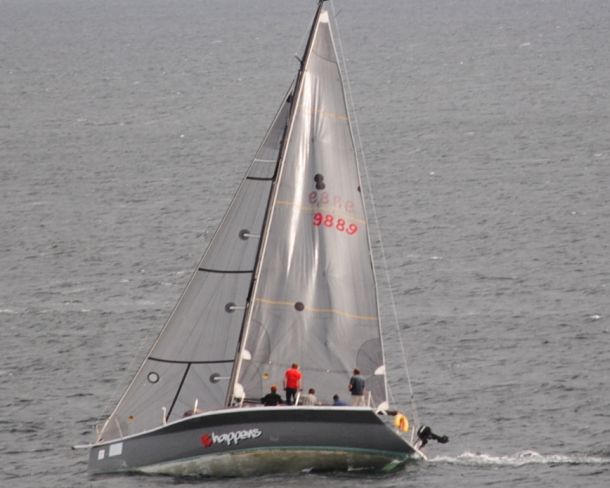 A fleet of 73 yachts contested the traditional twilight opening race for the regatta which continues on Saturday and Sunday when a dozen SB20 one design sports boats and more than 60 off-the-beach boats join the keelboats in contesting Tasmania’s biggest regatta.

Sailing in 12-15 knot nor’easter, Cougar II rocketed away from Racing Group 1 fleet, but while she won IRC, the TP52 was no match for Bellerive Yacht Club entry Invincible, Harold Clark’s Farr 1104, under both AMS and PHS scoring.

Invincible won AMS from Host Plus Executive and her Mumm 36 rival Tas Paints (Ian Stewart) with the two Mumm 36s crossing the finish line just five seconds apart. Unfortunately, the third Mumm 36, Madness was forced to withdraw from the regatta with a damaged rudder.

Under PHS scoring, Invincible took out the PHS category from TasPaints and Host Plus Executive, the margin on corrected time between the two Mumms 36s being just two seconds.

Adamson is co-owner with Janene Frawley of the Mumm 36 Madness and when that boat had to be withdrawn because of its damaged rudder the BYC allowed Adamson to enter Fine Cotton.

Racing on Saturday for all keelboat groups, SB20s and off-the-beach boats is scheduled to start at 11am.