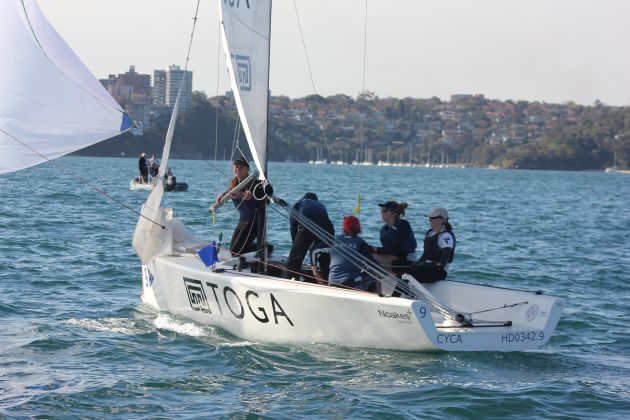 Costanzo and her team defeated fellow club mate Sarah Parker 3-1 in a variable 10 knot easterly breeze, after winning the round robin and choosing to sail against CYCA’s Lauren Gallaway in the semi-finals.

The round robin winner notched up a penalty against her CYCA competitor in the first pre-start of the semis, however was called over the line early giving Lauren a second chance. But it was not to be, as Clare sailed to the shifty conditions and won the series 2-0.

Sarah Parker was matched up against Celia Willison from RNZYS, giving us some of the most aggressive racing of the regatta. A penalty was given to each boat in separate pre-start incidents in match one, and luffing duels resulted in one given to the New Zealand team in the second match. Willison tried her hardest to wipe the penalty below the boat end of the finish line, but Parker didn’t waste any time and rolled to windward whilst her competitor was packing her spinnaker away, resulting in a 2-0 win.

The finals racing was a step up from earlier competition, with more lead changes than course changes on Sunday.

Clare commented, “It was some good racing out there. Sarah and her team were really dominant in pre-starts early on. I think the reason we were able to get back to her in those races was because we just didn’t give up.

“This is my first win as skipper at the Marinassess so it’s pretty exciting. I won two years ago as a crew, sailing with Sarah.”

Clare also commented on the progress of the RPAYC’s Youth Development Program saying, “Tommy (Spithill) has been running an intense training schedule at YD, and it’s great to see RPA go one and two in the regatta. Our squad numbers are almost 50% female, which is great for the sport.

“It was so good to see the newer teams improve over the weekend. To see how far they’ve come in the two days of racing was amazing. They were really giving us a run for our money, and can’t wait to see how much more they improve with more experience,” she ended.

In the petite final, it was RNZYS Celia Willison over Lauren Gallaway 2-0 in a best of three series. In the shifty conditions, there were plenty of opportunities for the taking, yet there were some small errors that cost the CYCA team overall.

Celia had a two-length advantage out of the start of the second race to be ahead at the top. Lauren and team were able to close down the gap and round the bottom mark tight on their hip to gain in the shift upwind. But, after rounding ahead at the top mark for the last time, they weren’t able to defend their lead and got rolled before the finish.

In the fifth and sixth sail-off series between CYCA’s Jess Grimes and RSYS’s Charlotte Griffin, the two less experienced teams of the regatta had an almighty battle with each other. Their matches contained numerous lead changes, proving they had put into practice their learnings from the previous day’s racing.

Jess Grimes seemed to be the more dominant of the two younger teams, controlling all three of the pre-starts. However, they weren’t able to convert them all into race wins, with Griffin claiming fifth place in the regatta 2-1.

Lauren Gallaway and Jess Grimes will join together for the CYCA team travelling to Mooloolaba later this month to sail in the familiar Elliott 6s (ex-CYCA) on the Mooloolaba River.

The Marinassess Women’s Regatta was first sailed as a fleet racing regatta in 1996 and soon after became a match racing regatta. In the 18 years of this event, many strong women’s teams have developed and we thank John Messenger and Marinassess for his and their support of women’s sailing at the YSA.