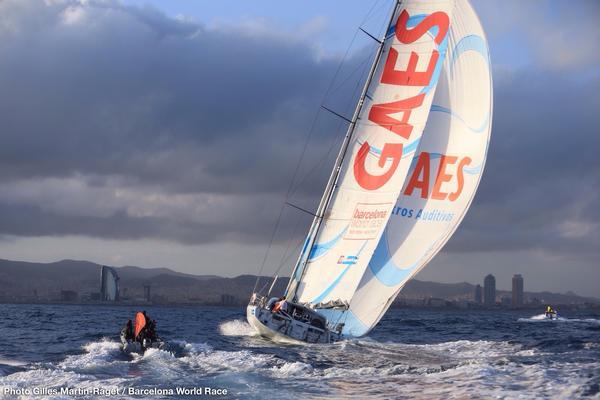 Barcelona, Spain, Wednesday 01/04/15: Catalan co-skippers Anna Corbella and Gerard Marin set out on 31st December 2014 at the start of the third edition of the Barcelona World Race with a defined game plan. If it worked out for them a podium place was their objective. Today they delivered.

Fundamental to their strategy was racing at a pace that would give them their best chance of finishing, to push hard when they could but to preserve themselves and their boat above all else. Finishing and sailing a smart, intelligent race to the best of their abilities was their goal.

As the first team to enter this third edition of the race, signing up in 2012, the duo have had the most clearly defined, focused training time of all the teams in this race. They have been equipped with a well proven, well optimised IMOCA 60 of the same generation and design as the first and second placed boats in this race, Cheminées Poujoulat and Neutrogena, a 2007 Farr design which also took third place in the la st edition of the race.

Their project, like them, is an all Catalan affair, and today they have realised the podium finish that they considered was within their reach –  if they stuck to their strategy, day in day out, around the world.

Corbella and Marín have been fourth, then third almost all the way around the course. In the depths of the south Pacific ocean they got to within eight miles of Neutrogena, Guillermo Altadill and José Munoz, who went on to take second. They finish 1d 17h 22m 28s behind second placed Neutrogena.

The Catalan duo mark a big leap up in their abilities since the last edition of the race. Back then, the former Mini class racers were very much on the nursery slopes of the IMOCA 60 race round the world, both individually mentored by more experienced skippers. Dee Caffari raced with Corbella in the last edition on Caffari's former Aviva on which she finished sixth in the Vendée Globe, while Marín – the youngest co-skipper in 2010-11 – raced alongside Frenchman Ludovic Agalor on Forum Maritim Català and finished eighth.

Partnered up by the FNOB, their training together included the Transat AG2R in the Figaro class and last year's New York to Barcelona Race during which they really highlighted their progress and potential. Finishing third, they were pushing a lot of the more experienced teams hard, proving they were confident in taking their own decisions and followi ng their own strategy, just as they have several times in this Barcelona World Race. This time they proved they can not only match the pace of the faster duos, but can keep their boat together and competitive.

Corbella, a qualified vet and Marín, a past Europe dinghy class world champion who left behind a three-month-old daughter to do the race, lost some small miles in the North Atlantic when they had to drop their mainsail to repair it and replace three broken battens and did not manage to stay with their two nearest rivals on the entrance to the Indian Ocean and became snared for two or three days in a zone of light airs when the Roaring Forties only whispered for them.

The race's only mixed sex duo were unlucky to be trapped in another cell of calm airs in the Southern Ocean and ended up bouncing slowly along the Antarctic Exclusion Zone, but they proved themselves to have enormous stamina and a quietly stated but voracious appetite for the race. They worked consistently and with discipline to keep their boat at close to 100 per cent, sometimes rewarding themselves with treats for getting their jobs list back to zero! On January 8th they lead the race albeit briefly, and again got up to second momentarily in the Pacific. Corbella sustained a knee ligament injury north of the Canaries when she was thrown across the boat, and Marin sailed many of the final miles in solo mode for much of the time.

Their boat started life as Gitana Eighty of Loick Peyron, a leader during the 2008-9 Vendée Globe. It finished third around the world in the 2010-11 as Renault ZE in the hands of Spaniards Pachi Rivero and Toño Piris and sailed to fifth place in the last Vendée Globe as SynerCiel with new Barcelona World Race champion co-skipper Jean Le Cam.

After the technical stop of Neutrogena in New Zealand, Corbella and Marin saw the chance to catch up and tantalisingly came to be less than ten miles behind Altadill and Munoz. After rounding Cape Horn at just ten hours behind Altadill and Munoz, their Atlantic climb finally saw Neutrogena move progressively further ahead, but their highly commendable third place is a worthy reflection of their further potential, a team which has proven solid and, surely, stronger together than the sum of its parts.

The fourth-placed finisher is expected around April 9. The fight for this position remains open between the One Planet, One Ocean & Pharmaton and We Are Water which are racing towards the Strait of Gibraltar with some 127 miles of difference between them.

more stats and info at http://barcelonaworldrace.geovoile.org/2015/

Anna Corbella (ESP) GAES Centros Auditivos: “It felt a long long race at times,, but right now I have the real feeling it was only short time ago that we left here. It's a strange sensation, but really that final bit of the Mediterranean we have struggled a bit, and the Atlantic too, coming back north, that bit felt a bit long.”

Gerard Marín (ESP) GAES Centros Auditivos:  “At the begnning of Anna's injury, when we were in the Atlantic, with the few maneouvers it was bearable, but here in the Mediterranean this is a place wth very variable wind and there are many maeouvers, and I am quite exhausted. It is very emotional and moving.”

Improvement since last edition for both?

Corbella: “I think that both of us, since we finished the last edtion, we had it clear that there was the chance to come back, and we have worked hard for that: we have sailed other classes together, we have done transatlantic races and I think this is the result of the work we have done, and we have prepared ourselves carefully.”

Marin: “Obviously this time we have a  good boat, and even though once you finish the race you start analyzing how it went. We are very happy because though there were some important errors – a few, but very crucial. For instance, the worse of them -and here it is lack of experience- at Cape of Good Hope we crossed a tropical low, and there we were with the group, we were 100 miles behind, and then we lost some 300-400 miles, and 4 days laters we caught a high that the ones ahead did not catch and of course, then we lost the race, they escaped 1000- 1500 miles away and then that was it, a step behind. But you realise that once it's done. It's very easy to see it later, but in that moment, the decission was difficult.

I think Neutrogena was our objective, I mean, we know Guillermo well and we know he is a person who pushes the boat a lot, right? And technically he is very good, so we knew that with the same weather conditions it would be complicated, bu t well, our hope was being consistent, keeping the boat in good conditions and if he had any problem, then we would be able to pass them. We were there and well, … in the end it has been very nice, but well… we are happy.”

Did you imagine a podium position?

Corbella: It was a possibility

Marin: It was a remote possibility

Marin: that is complicated

Corbella: Maybe we are a bit superstitious but we never sailed what we wanted as a result before the start… Also, we knew that there were people better than us and more experienced, with very good boats and they would be ahead. Then everyone has problems or makes mistakes as we did, and see, we have been able to benefit from that and make a podium.

First thing you want to do?

Marin: Hug my daughter and my wife

Corbella: The same, hug all the people who came here to see me and then eat, probably something normal, and take a shower.
It's been easy or difficult in comparison with your previous experiences?

Marin: For me, difficult, because actually we have had lots of problems, we have spent the whole race repairing things, small things but non stop, and that's really something that comes with the race pace: if you are pushing the boat, then little issues come up. Also, obviously, errors due to lack of experience, that as the race went on, we solved, but actually in the end, the spares list went down and down and you think “will we arrive or won't we?.

Corbella: In my case also. The  first one was difficult because it was something new, it was a first experience, a discovery, but I dont' remember having this many technical problems, because we have really had some days when we thought “well, what's next? Bring on the next breakdown, we are ready”. And…there have been moments we haven't really stopped repairing, and that was exhausting because every moment you had for resting you needed to repair something, and that is gets you very tired.