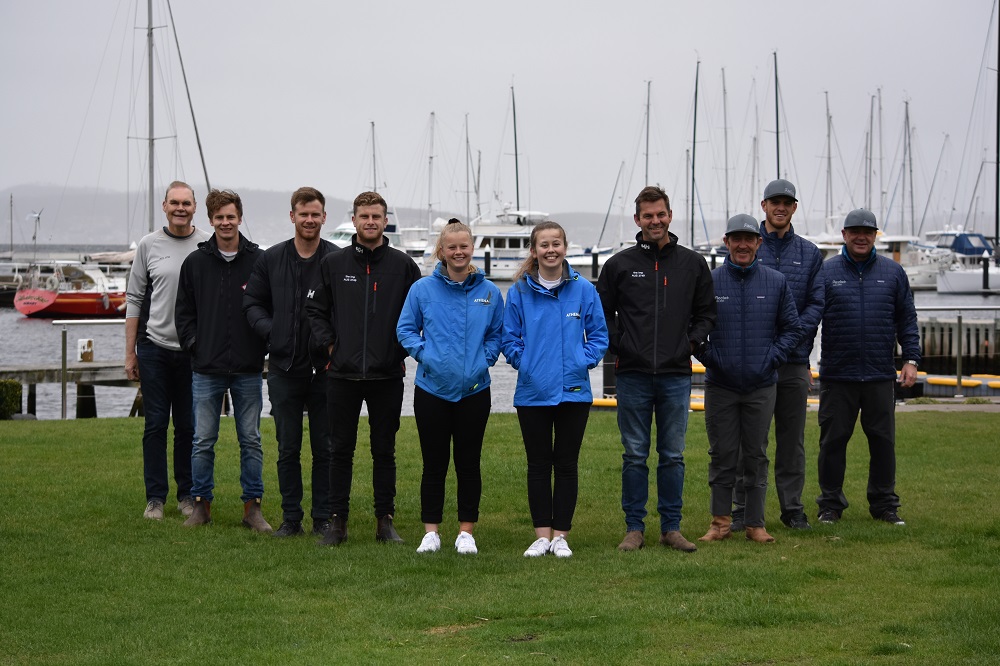 Cooper, sailing a spanking new SB20 designed by Tony Castro manufactured by UK based Sportsboatworld, and delivered especially to Hyeres, France for racing, begins his campaign on Aeolus next week.

Cooper will be looking to get the boat up to speed as quickly as possible during his first regatta, sailing in the French Championship from 12-15 September, but is confident his team will be ready.

“With Darren Jones and Jock Calvert, who’s in the Australian Sailing Team doing an Olympic campaign in the Finn class, we’ve got a lot of depth of knowledge. Hopefully that will help us get the boat prepped quickly,” said Cooper.

The waters off Hyeres are known for offering up tricky conditions to the local sailors, and the mistral wind, a strong and cold north-westerly wind, has been known to cause havoc on occasion.

Cooper was the best performing Australian skipper in the SB20 Worlds sailed in Hobart in January 2018, finishing in sixth place behind five international teams. The three French teams that finished ahead of him are likely to be sailing in Hyeres.

Cooper will follow the French Nationals with the French Grand Slam, 4-6 October 2019, and the pinnacle event, the World Championship, from 19-25 October.

On their return to Australia, the team will have a quick turnaround for the 2019 SB20 Australian Championship which will be sailed on the River Derwent in Hobart during the first weekend of November.

However, Australian team Porco Rosso, helmed by Elliott Noye, with owner Paul McCartney on main and Ed Snowball on bow, will be hot on Cooper’s heels. The 2019 Tasmanian SB20 champions have sailed select regattas over two European summers with considerable success.

“We had two regattas in Europe a couple of months ago and we are feeling good, feeling confident, and ready to get into it,” Noye said.

The French are always up there in the top five, but there’s definitely good competition from all around the world so we are looking forward to getting there and trying to mix it with the top guys.”

Porco Rosso is entered for the French Grand Slam and the 2019 Worlds events.

Local businessman, Andrew Smith of Willie Smiths Apple Shed and Cider, will be hoping the combination of the unstoppable David ‘El Chappo’ Chapman and current Tasmanian SB20 Youth Champion Lewis Noye, will give The Imp the edge.

Chapman, known for his aggressive tactics and competitive nature, will be pushing The Imp hard and must not be underestimated in this close one-design fleet. The Imp is entered for the French Grand Slam and the Worlds.

“Yes, I’m happy. (Like Brett), we’ve got a new boat from the same charter organisation. This is our third attempt at the Worlds; we’ve been constantly improving and coming up the fleet,” Smith said.

“The French are incredibly good sailors, they will be difficult to compete against on their home turf, but we’ve stepped it up. Chappo has had a very good year and has a few wins from various campaigns. The Noye brothers are talented sailors and Lewis is great to have on the boat. We feel prepared.”

Australia also boasts one of the only all-female youth teams registered for the World Championship. Essence of Athena, sailed under the Derwent Sailing Squadron’s Athena Sailing Program, is travelling to Hyeres to compete in the 2019 Worlds event only.

With time for only one practice race prior to the Worlds event, the team will have a lot of pressure on them to adjust to the conditions, but with all crew members under 20 years of age, the Essence of Athena team will be looking to build their international experience racing in a fleet of close to 80 boats.

“It’s hard getting everyone together, as we are a busy group of girls, but we are getting lots of training in. We’re heading to Hyeres to sail the best that we can, to have a great experience and to learn lots,” said Issi De Klerck.

Anna Reid will helm Essence of Athena the boat, with crew of De Klerck, Meg Goodfellow and Emily Nicholson.

SB20 Australia Class President, Stephen Catchpool, who is not competing this time, is quietly confident that the Australians will perform well on the Mediterranean.

“We’ve got some very strong teams going to the Worlds in France and I’m expecting at least one of them to get a podium result. It will be interesting to see what the weather does at that time of year in Hyeres, but I think the windier it is the better it will suit us,” Catchpool commented.

Current Australian SB20 champion, Michael Cooper, will be in Africa taking a break from SB20 sailing, but expects to be back on the water to defend his title in November.

The regattas will be run under the authority of the Cercle De Organisation de Yachting de Competition Hyerois (COYCH) in Hyeres, in conjunction with the SB2 class.

Hyeres, France, is widely regarded as the original French Riviera. Located between Marseille and Nice, and boasting a maritime national park, the Medieval Old Town, rosé and Provencal cuisine, Hyeres has no shortage of attractions for the sailors and their support teams.

The SB20 was designed by Tony Castro and is a slick and spectacular one-design class sports boat with a crew weight limit of 270kg.