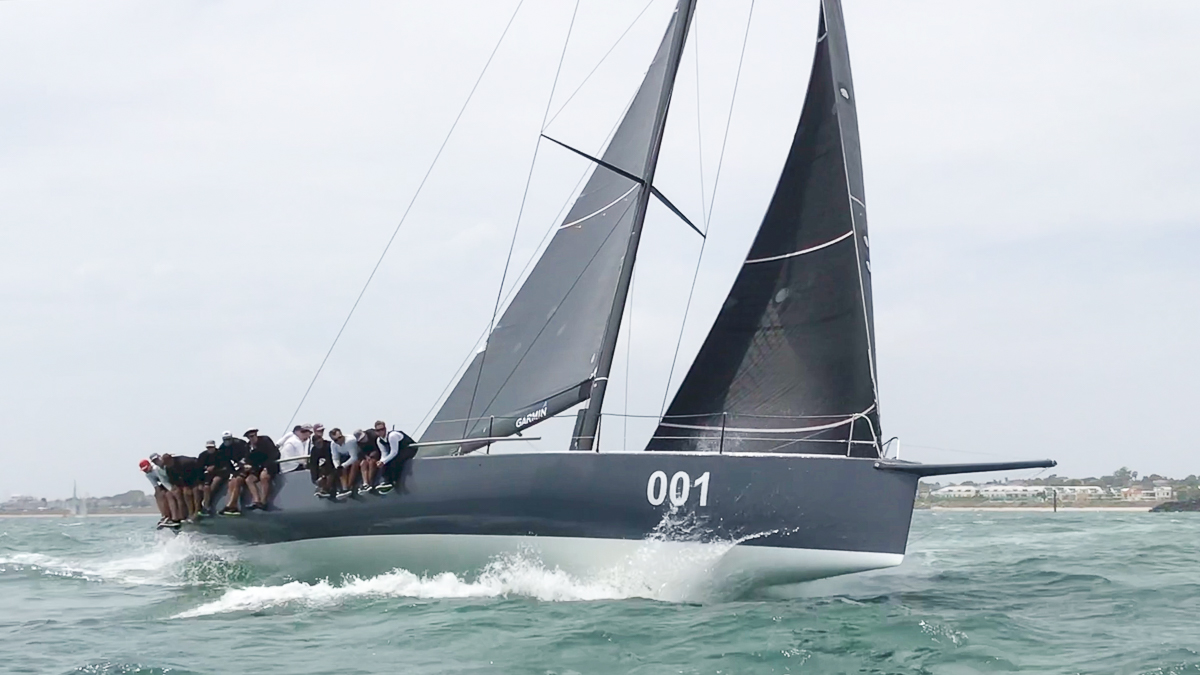 Matt Allen’s new Botin 52, Ichi Ban, has had a flawless performance on the first two days of the 2018 Australian Yachting Championship and is sitting at the top of the Division 1 IRC table with one day to go.

“It’s been a great couple of days of competition from Sandringham Yacht Club with a nice amount of wind amongst the heat yesterday. There wasn’t too much out on Port Phillip Bay early on today, but it picked up nicely later on in the afternoon,” 2017 Rolex Sydney Hobart winner, Matt Allen, said.

“Sandringham Yacht Club is a great place to come to and it is very easy to get to on the way home from Hobart. It’s always good sailing down here and this is probably the hottest fleet that I’ve competed against down here (Melbourne), it’s been lots of fun,” Kirby said.

“Conditions were much cooler today … it was light in the morning but a steady breeze all day with no patches, and it slowly built to a nice final run home and a good workout to get to the finish line.”

Ikon (Bruce McCraken) remains in control in Division 2 with Reverie (Alan Woodward) in second and Khaleesi (Andrew and Pauline Dally) in third.

J/111’s, Jake, Playlist, and Joust are still battling it out for their National Class Championship with the final day to reveal which of the Victorian J’s will reign supreme.

“Yesterday was good. We had four windward leewards and this is the first time we have had the six Js all together which is terrific,” Rod Warren from Joust said.

“We had four wins yesterday, and the other boats were really close, which is what we are looking for in this class. We’re hoping to build a one design class that a lot of other boats will migrate to and I think there is a lot of excitement seeing the boats so close.

“The start was very light today and there was either a good way to go or a bad way and we choose the later. The guys who got out in front did really well and heading in to tomorrow the racing should suit us.”

From the Royal Yacht Club of Victoria, Trevor Neitz’s Executive Decision is still edging out the Tasmanian Philosopher in Division 3 IRC with the crew from the Apple Isle one point behind.

After a slow start to the day, the multihulls came home strong with, Fury Road, Carbon Credit and Wilparina III all tussling it out in Division 1 for Australian National Championship bragging rights.

“We’ve had lots of mechanical issues, particularly yesterday, which made sailing difficult, but the boys have overcome that,” Fury Road Skipper George Owen said. “We spent last night fixing up the boat and it handled better today.

“Our boat likes flat water with about 15 knots and suffers in light and heavy so today was an all-round day with plenty of slop. We managed to hang in there as it was a race against the clock.

“The plan tomorrow is to have good starts, maintain our boat handling and go the right way. Todd and Pat who I said with are really great and we are looking forward to it.”

Tyee III is leading the Division 2 multihulls on equal points with Peccadillo with Fifty Fifty in third.

The final day of the 2018 Australian Yachting Championships will start at 10:25am tomorrow, Sunday 21 January.