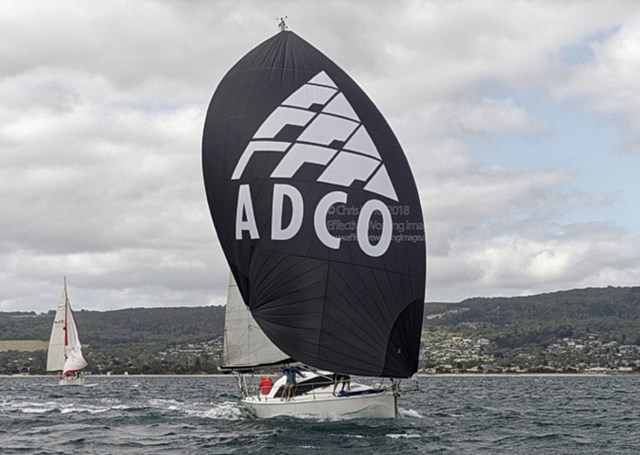 Peter Dowdney is one of Australia’s most experienced yachtsmen, who should easily get by without a good hot meal while sailing in an event like the Rolex Sydney Hobart Yacht Race.

But even if the thought had passed his mind during a rough and tumble and wet first night at sea in this year’s 76th edition, the chances of him being able to prepare it were minimal.

Dowdney and Grant Chipperfield are co-skippers of Chipperfield’s Elliott 1250 Tourer, Joker on Tourer, from Victoria.

They are sailing the boat in the Two-Handed Division of the 628 nautical mile race, organised by the Cruising Yacht Club of Australia.

But as well-equipped as they are for experience, skills and camaraderie to sail two-up, Dowdney says they have not been equipped to whip up hot meals.

Well, at least to this point in the race.

“We are not really set up well for cooking,” Dowdney said on Monday afternoon as he and Chipperfield continued down the NSW coast.

Dowdney, whose career includes sailing as bow on Steak ‘N Kidney in the 1986-1987 America’s Cup as a 20-year-old, was talking not so much about the facilities on board.

He was referring more to the challenging conditions that he and Chipperfield were having to sail in on the first night and how that limited their ability to actually use their facilities.

Dowdney cited the simple fact that their cooking area is on the port side. “On port tack is where we have been for 90 per cent of the time,” he said. “Everything would go everywhere.”

However, for Dowdney, who conceded that he has been yearning for a “bacon and egg roll”, there was a glimmer of hope this afternoon that tonight might be the night for a cooked meal.

As they sailed into calmer conditions, he was optimistic that he and Chipperfield might just get some balance in their boat and be able to cook up a feast before they cross Bass Strait.

“We’d like to have a hot meal tonight, and we’ll try; as well as clean up the boat a bit,” he said.

“The conditions are much better now. The seas have abated … it is more wind chop now.”

Dowdney was happy with the progress he and Chipperfield were making in the race.

“There was a strong current and breeze … it was an unpleasant night, but we got through it,” he said of their first night at sea. “All we have to do now is to get through to the other side.”

He said the pair hope to pass Green Cape at about 2am on Tuesday, and were readying for the passage by slipping into a watch system of three hours on and three hours off.

But as has been the case in this year’s Rolex Sydney Hobart, one crew’s story of fortune has been matched by another’s misfortune. The two-handed fleet has suffered its share of setbacks.

The latest two-handed boat to retire from the race was the Jeanneau Sun Fast 3600, Maverick, whose co-skippers are Rod Smallman and Leeton Hulley.

Maverick was the 34th boat to retire from the race, and the sixth two-handed entry to do so. The boat sustained starboard rudder damage after hitting something in the ocean.

“We hit something heavy,” said Smallman. “Part of the deck was also shattered.

“We were taking a bit of water, but there was not a safety issue.

“We are gutted. We were the furthest east, in the current and thought we were in good shape.”