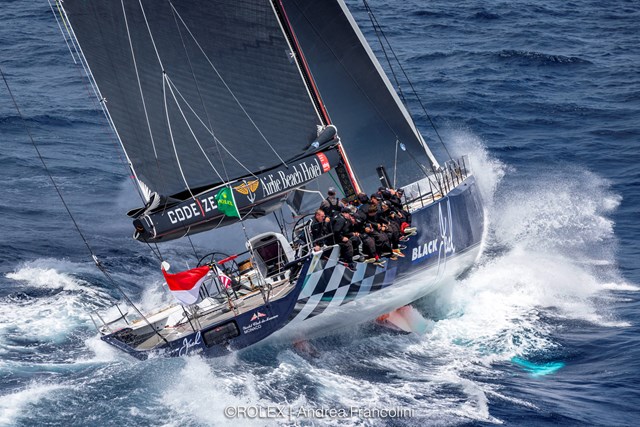 A spectacular fight for line honours up the Derwent River in the Rolex Sydney Hobart Yacht Race may be on the cards, says Cruising Yacht Club of Australia Commodore, Noel Cornish.

At 5pm today, Peter Harburg’s Black Jack was well into the crossing of Bass Strait and leading the race by 18 nautical miles over the David Witt-skippered SHK Scallywag 100.

Christian Beck’s LawConnect was in third place another 13 nautical miles behind. Meanwhile, the 80-footer, Stefan Racing, was in fourth, six nautical miles further back.

As they sailed on, behind them the fleet continued to be depleted by retirements due to the southerly winds that reached 30 knots overnight, and a southern current.

From the 88 yachts that started at 1pm on Sunday, Boxing Day, 34 had withdrawn for various reasons by 6.30pm (AEDT) on Monday, leaving 54 in the race, including 11 two-handed boats.

Speaking in Hobart on Monday afternoon, the Commodore was optimistic that the big boats in the 628 nautical mile race would get through the southerly soon and find themselves in favourable winds for a nail-biting finish off Constitution Dock mid-or-late afternoon tomorrow.

Asked if the prospect of the frontrunners charging up the Derwent River together was a possibility, Commodore Cornish said: “It certainly is. They are neck and neck at the moment.”

However, Cornish believes it may be a different story for the smaller boats in their wake.

“The boats that are leading, like the 100-footers, they’re probably pretty much through this system now,” he said.

“I would expect in the next five to 10 hours that they’ll be into much calmer conditions from a wind and waves viewpoint, but it will take a while for the seas to abate.

“With respect to the sort of medium size and smaller boats in the fleet, they’ve probably got another 12 hours or so of these southerly conditions before they move into easier times.

“This is a race that’s going to be pretty tricky because by the time they get further down into the Tasmanian coast, these medium-sized boats and smaller boats will be into a ridge.

“There will be a big high system down there and they’ll be much lighter winds and there will unfortunately be times when there’s no wind. It’s going to be a race of very varying conditions.”

Stefan Racing continues to apply pressure on Black Jack, SHK Scallywag 100 and LawConnect, and skipper Grant Wharington is determined to keep them within reach.

“It was a bit uncomfortable last night,” Wharington said. “We haven’t gone through too many dramas. The boat is going pretty well, we keep up with the 100-footers except when close reaching.

“When the breeze drops down, it will be interesting to see who makes it across and who doesn’t. We have to hang in with the front guys and get the pressure with them.

“We haven’t sailed together very much at all. Even in Wolf Rock, we only sailed with half of the crew. Some of the guys haven’t been going too well – they’re a bit ill, but we’ll go strong to the finish.

“The young guys are going well. They’re doing a bit of cooking and helping out below and on deck.”

Meanwhile, spirits were high on the fifth-placed JV62 Whisper, owned by David Griffith, as she sailed south of Gabo Island into a 15 to 20 knot south-easterly breeze at 12 to 13 knots.

“It’s still moderate, we still have reasonable conditions, but it’s not as bad as last night. The sea we had last night was very rough,” said navigator Michael Bellingham.

“The first 24 hours are time to look after your boat and certainly that was paramount for us.

“We had a few little issues but we’re ok. We’ve got the three 100-footers and an 80-footer ahead. We have a bunch of TP52s behind us. We’re pretty happy with how we’re going.”

For smaller boats, the race has been tough, as reported Grant Chipperfield, owner of the two-handed Victorian entry Joker on Tourer. He is sailing with Peter Dowdney.

Chipperfield reported “a bumpy night last night, storm activity where we saw 45 knots 30 miles off the coast. It was a very uncomfortable night – one reef in the main. Not much sleep…”