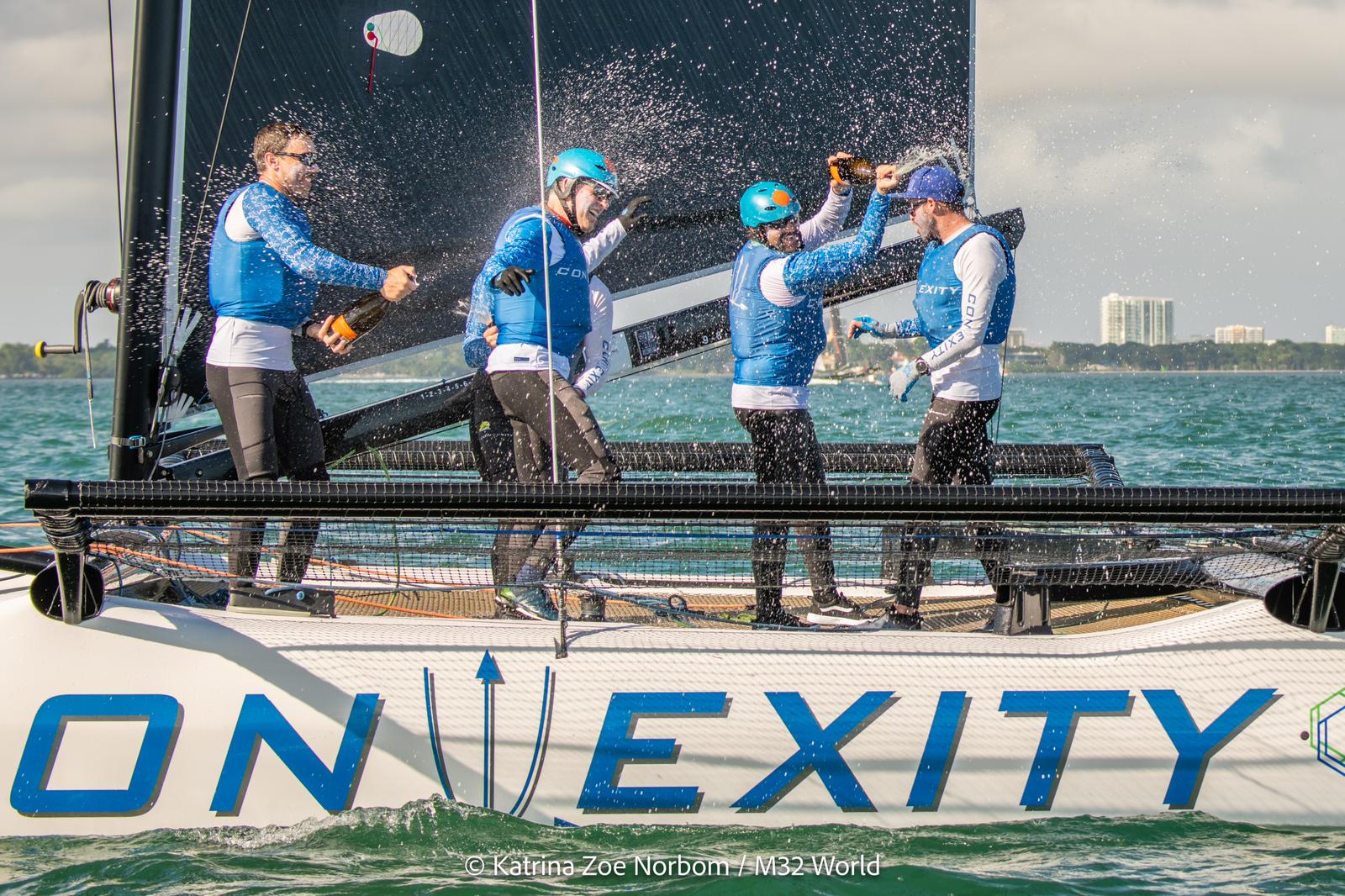 The M32 World Championships came to an exciting close on Sunday.

Eleven teams came from all over the world for 18 races in conditions ranging from six to 22 knots on the warm waters of Miami, Florida. When the dust settled Convexity, with Don Wilson at the helm, was able to defend their World Title.

The celebrations were barely over before talk of the next World Championships in October in Cascais, Portugal sprang up. The Sailors are eager to spar with their friends again for the World Title and they are looking forward to even more teams joining them next October.

Convexity smashed the competition with three races to spare. Despite Convexity’s regularity at the top of the podium in the last year, there were some doubts going into this most recent competition. They finished mid-fleet at the National Championships in October and though they improved to second at the Pre-Worlds, they were edged out by Anthony Kotoun on team Catapult.

Don Wilson erased those doubts with his commanding win this week. “We just focused on constantly getting better and finding little ways of getting the boat faster,” he said.

Team Catapult, driven this week by Kotoun, finished second. Catapult is usually driven by Joel Ronning, but the rest of the team stepped up to fill his absence this week. “There are some incredible teams here that are well polished and extremely talented and to be able to come and mix it up with them is a wonderful thing,” said Kotoun.

The comeback story of the regatta was Inga From Sweden. “This is my best result ever at any Worlds. I am very happy,” said skipper Richard Goransson. Goransson finished second at the nationals in October. But had an inauspicious start to the World Championships, finding himself in only 6th place after the first day. His team consistently chipped away over the course of the regatta, gaining places every day to finish third overall.

“Convexity is a step ahead of us still, but that’s not going to last forever. I hope they all come to Cascais,” said Goransson.

This was Ryan McKillen’s first World Championship with his team Surge. “It’s tough,” he said even with a big smile on his face. “A lot of boats on the starting line. It’s pretty unforgiving out there if you don’t get off the line and we didn’t get off the line very well.”

One of the specific things Ruh is looking to improve on is learning the fastest modes of the boat and how they change in different wind conditions. He plans on getting back in the boat in January for the Miami Winter Series.

The World Championships may have finished today, but in between the boat pack-up and the podium celebrations there was palpable anticipation for the coming Miami M32 Winter Series. “If I wasn’t so sore I’d want to do it again tomorrow,” said Ruh.

Four weekends of racing are planned throughout January, February, March, and April; the best months to be racing in Miami. It can’t come soon enough.