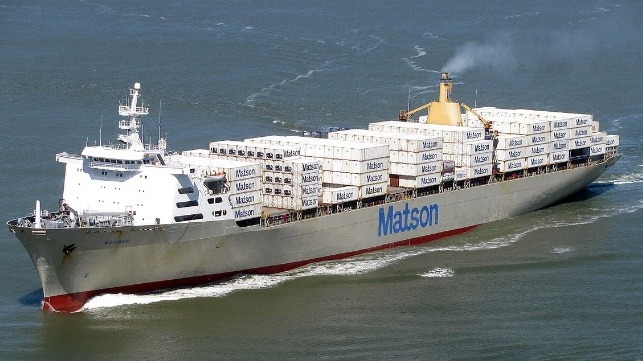 The crew of the Mahi Mahi brought the mariners back to Honolulu Thursday afternoon. There are no reports of injuries. A hazard to navigation notice to mariners has been issued regarding the derelict trimaran.

“One of our greatest challenges out here in the Pacific is distance,” said Lt. Diane French, a Joint Rescue Coordination Center (JRCC) command duty officer. “First responders are often days away and we regularly rely on merchant vessel crews like the Mahi Mahi’s to assist with search and rescue cases. We are always grateful for their help.”

At 8 a.m., Tuesday, JRCC watchstanders received a report from a friend of the trimaran’s master stating the vessel had not made contact since Monday. The three mariners aboard were attempting a non-stop circumnavigation of the globe and their last known position was between California and Hawaii.

JRCC watchstanders issued a SAFETYNET broadcast notifying merchant vessels in the region of the situation and spoke with the Third Try’s captain’s friend and family to ascertain the vessel’s intended route.

Watchstanders also reached out to Automated Mutual-Assistance Vessel Rescue System (AMVER) ships in the area for assistance and the crew of the nearby Matson vessel Mahi Mahi agreed to divert and travel along the Third Try’s suspected route.

At 3:01 p.m., Thursday, JRCC Watchstanders received an alert from an Emergency Position Indicating Radio Beacon (EPIRB) registered to the Third Try. Watchstanders updated the SAFETYNET broadcast with the new location and launched an Air Station Barbers Point HC-130 Hercules aircrew with a life raft aboard in response. They also notified the Mahi Mahi crew of the new location.

The Hercules aircrew arrived on scene and located the adrift Third Try. The aircrew reported the vessel had structural damage and had lost its rudder. The mariners were requesting to be removed from the vessel.

At 3:33 a.m., the Mahi Mahi crew arrived on scene and successfully evacuated the three mariners from the Third Try.

AMVER is a worldwide voluntary reporting system sponsored by the United States Coast Guard. It is a computer-based global ship-reporting system used worldwide by search and rescue authorities to arrange for assistance to persons in distress at sea. With AMVER, rescue coordinators can identify participating ships in the area of those in distress and divert the best-suited ship or ships to respond. Engaging in AMVER does not put ships under any additional obligation to assist in search and rescue efforts, beyond that which is required under international law.

Block Island Race Week will kick off with 165 boats

Club Conference Webinars to Resume in 2021