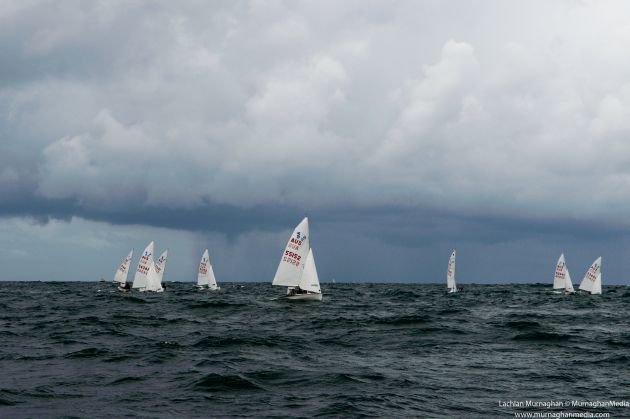 The racing schedule at the SPLASH festival has officially begun, with over 220 competitors taking to Sydney harbour to compete in their respective class National Championships. The Zhik 9er Australian Championships have the highest number of competitors with over 120 sailors from across Australia and New Zealand. All 9er competitors and those racing in the Australian 420 and I14 Championships dealt with mixed conditions during a long day on the water.

It was a day to post small numbers on the scoreboard, with all but one class leader recording straight wins, or ‘bullets’ as the sailors refer to them. Mixed south – east conditions, combined with rainsqualls and large wind shifts met the sailors, competing on two race areas. The rain parted in time for the I14 and 420 fleets to finish two races, whilst the 9er classes completed three respectively.

On the 9er course, Race Officer, Peter Moor, moved the start line southwest to Clarke Island once the wind shifted to the East in the afternoon. The move caused delays after stronger east, southeast winds in the morning, around 15-20 knots, which abated due to two rainsqualls. The course area change applied to all 9er classes.

Whilst on the 420, Delta Course, in the Manly Sound, sailors were treated to consistent ESE breezes at 15-17 knots, for the first race before the breeze swung through 40 degrees to 080 for the second race. This forced the PRO, Rob Lowndes, to relay the course before the second race.

Local skipper, John Cooley and his crew Simon Hoffman kicked off their Nationals and summer sailing campaign in the best way possible, picking up three wins and marking themselves as real contenders for the week ahead.

Yesterday, the team claimed they were here to win and today proved that was the case. The boys knew they’d have the local edge as Hoffman made their goals clear yesterday, ‘first place, that’s our goal – that and getting a spot in to the Australian Youth Sailing Team’.

In second place overnight is Belmont 16ft Skiff Representatives, Tom Crockett and Tom Grimes, while the Victorian team of Thomas Alexander and Oscar Gunn break the NSW domination, in third. There is only one all-girl crew in the top ten, fifth placed Natasha Bryant and Annie Wilmot of NSW.

You wouldn’t know that David Gilmour and his crew, Lewis Brake had never raced together before. The pair recorded a 1, 2, 1 over the day – proving their potential across a range of conditions, ‘it was shifty but what we expected’ an up-beat Gilmour commented.

‘They moved the course after the wind shifted and it became a much better track’, he continued.

Gilmour’s brothers Lachlan and Sam didn’t seem to give him too many issues today, but the local team of Harry Price and Harry Morton caused upset in the second race, taking the win. Price – the younger brother of 49erFX sailor Olivia – and crew Morton, sit in second place overnight. AST member, Joel Turner and his crew, Tom Signato head in to tomorrow in third place.

2012 Olympic Silver Medallist, Olivia Price and her crew, Eliza Solly took advantage of Price’s local knowledge as they sailed to three straight wins. There was a mix of conditions on course that Price found it ‘tricky out there, you had to be prepared for the wind to come from any direction and pretty much any strength.’

After being out of condition due to Solly suffering a knee injury, the girls are hoping to build up their boat handling and confidence this week, ‘it’s not really up to scratch’ Price commented, ‘we’re hoping to build on that over the next few days.’ If today’s result is anything to go by, they will be dangerous once their true form is back.

Up first this morning, the I14s enjoyed the best conditions of the day, with plenty of fast sailing and exhilarating racing for the fleet of 16. David Hayter and Trent Neighbour, representing Adelaide Sailing Club, won both of today’s races.

It was almost a broken fairytale, when the pair capsized only metres from the finish line of the second race. Luckily for the team aboard 666, their lead was over 40 seconds long, allowing them to recompose and take the victory, ‘the last one [race] was a little bit sketchy’, said Hayter.

‘It was very intense’ replied Neighbour, who has sailed with Hayter for six years. The pair hope to continue their success tomorrow, particularly with the strong wind predictions, something they don’t usually enjoy.

In the minor positions, Lindsay Irwin and his crew sit in second place, whilst defending National Champions, Brad Devine and Ian Furlong are in third.

The 420 course in the sound was a mixed bag, with the start close to South head and assistance of a building southerly swell, competitors and the race management team were kept on their toes. It wasn’t only the weather on the course, but also the sky that the race managers kept an eye on, as a waterspout developed off the Sydney coast.

It was the Victorian team of Nicholas Sharman and James Grogan who dominated the fleet today, but it wasn’t as easy as it looked ‘it was a mix of conditions. We just tried to keep the boat moving fast, having clear starts and doing what we could,’ Sharman explained.

Grogran was more concerned with the obstacles on the course, ‘there was a waterspout, a white out and a massive swell – it was pretty extreme’.

Extreme, no doubt, but obviously conditions that worked for the pair that took the silver medal at the recent Sail Sydney event, held in the same race area.

New Zealand’s Josh Berry and Henry Haslett are currently in second place, whilst Victoria’s Nick Joel and Hugo Llewelyn are third. The first all-girl crew are Sophie McIntosh and Emily Summerell, in fifth place after the first day.

It’s rare for the winners across each class to be so consistent, but it shows the dominance of some boats. Whether they will hold on or be further tested throughout the week, we’ll have to wait and find out… Who will reign supreme? All we know now is that there’s a long week of racing ahead.

Racing continues tomorrow for all classes, with no warning signal for the 9er classes before 1030, the 420s starting at 1300 and the I14s rounding out the racing at 1400. Gusty Southerlies and mild temperatures are expected throughout the day.

Results are available from the following link: http://www.sailingresults.com.au/ScoreItV2/Public/Templates/2016Splash/index.php?event_id=445