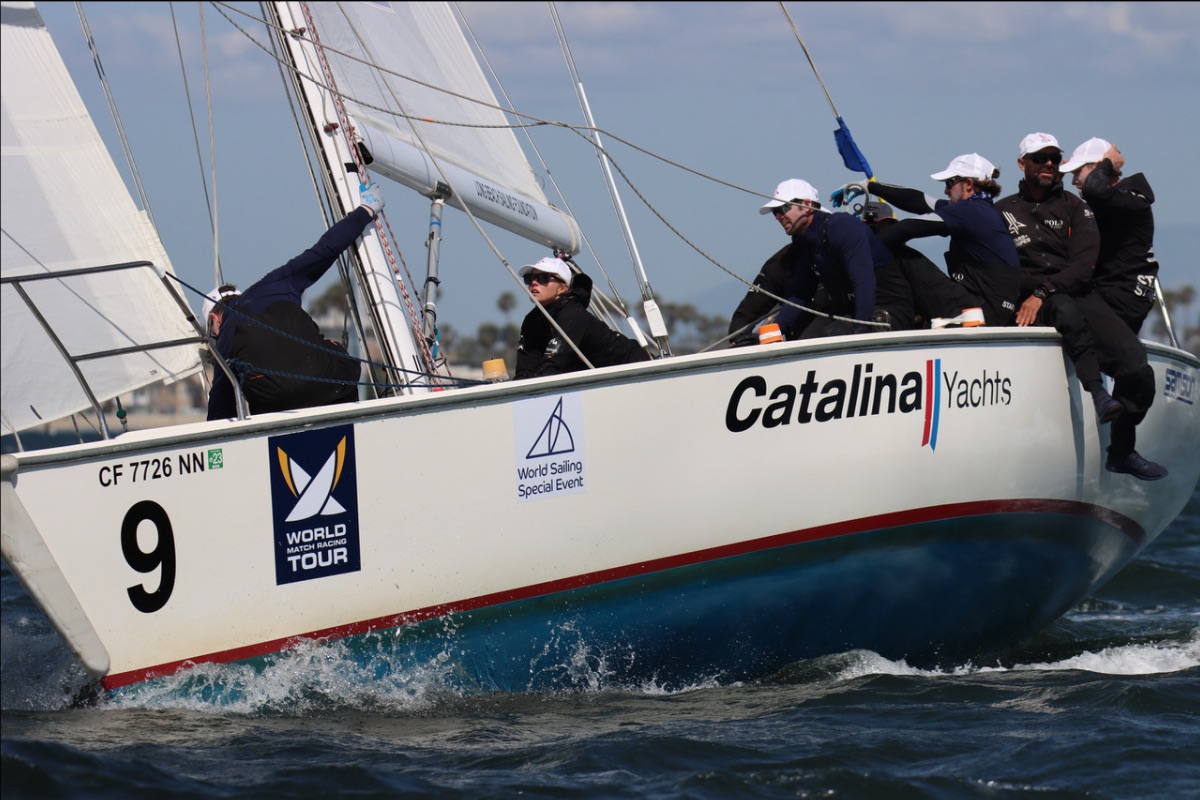 Ten of the world’s top-ranked match racing teams battled 20 knots of wind and bloodthirsty rivals for a chance at the Crimson Blazer at Long Beach Yacht Club in this five-day series.

None of the qualifiers are strangers to Congressional Cup’s elite; past winners Canfield, Williams and Berntsson each already have in their closets an iconic Crimson Blazer: yacht racing’s equivalent to The Masters’ green jacket. Concluding races tomorrow and Saturday will prove to be thrilling for competitors, and spectators as well as they watch from the Belmont Veterans Memorial Pier.

There was never any doubt five-time Congressional Cup winner and defending champion Canfield would qualify. Pedigree and poise has kept his Team Stars+Stripes at the top of the leaderboard over the past three days of exhilarating racing. Likewise Williams, a four-time Congressional Cup victor and long-time rival to Canfield, quickly made known his intentions, with his Team Gladstone’s Long Beach claiming a spot on the top of roster despite a three-year absence from Congressional Cup racing.

But it came down to the wire for the final two berths, with four gifted skippers hungry for those spots: Berntsson, Poole, Jeppe Borch (DEN) and Emil Kjaer (DEN).

In the last flights of the second round robin today Poole won a decisive match over Kjaer, which could have thrust Kjaer ahead in a tiebreaker; instead the loss squeezed him out of the semis. Still, it marked an impressive result for the 20-year-old sailor from Denmark.

But Poole’s battles weren’t over. The very final flight of the round robins would decide whether he – a four-time Congressional Cup veteran – would advance to the finals or defer to Ficker Cup winner Borch. It was a battle for points: a rousing bout of Poole vs. Berntsson. Poole aced the start to beat Berntsson for the added point, while Borch – who had defeated Potts – sailed on the sidelines awaiting his fate. Again, an excellent showing for young Congressional Cup first-timer Borch, as well.

Earlier Berntsson had won a pivotal match over Williams: no bearing on Williams’ position, but vital for scoring the points Berntsson needed to get in the semis.

Williams then turned the tables on Canfield in a thrilling tussle, where the adversaries sparred around the entire course. Williams finished just two seconds ahead of Canfield: a foretaste of the electrifying competition the crowd will see in the days ahead.

Today’s heavy wind made sailing challenging: the boats moving faster, manoeuvres happening swiftly, and mistakes as well. Prone to round up in the stiff breeze, kites were soaring and dumped in the water as the exhausted sailors raced around the course again and again.

And Principal Race Officer John Busch has been aggressively running races in anticipation of even more breeze: as a Thursday night low pressure system barrels across the Pacific. Rain should clear by Friday morning: but not the gusts, with winds expected in the 20s, above the fleet limit for safety.

The Catalina 37 fleet was designed exclusively for racing and has limited sail inventory; unable to reef the main and reduce sail sufficiently, at a sustained breeze over 20 knots racing is typically postponed.

Visit www.thecongressionalcup.com or our Facebook page for up-to-the-minute information on race schedule, and full results.

Can’t make it to the Pier? Watch the racing on the live stream which continues tomorrow and Saturday at  www.thecongressionalcup.com or @CongressionalCup on Facebook.