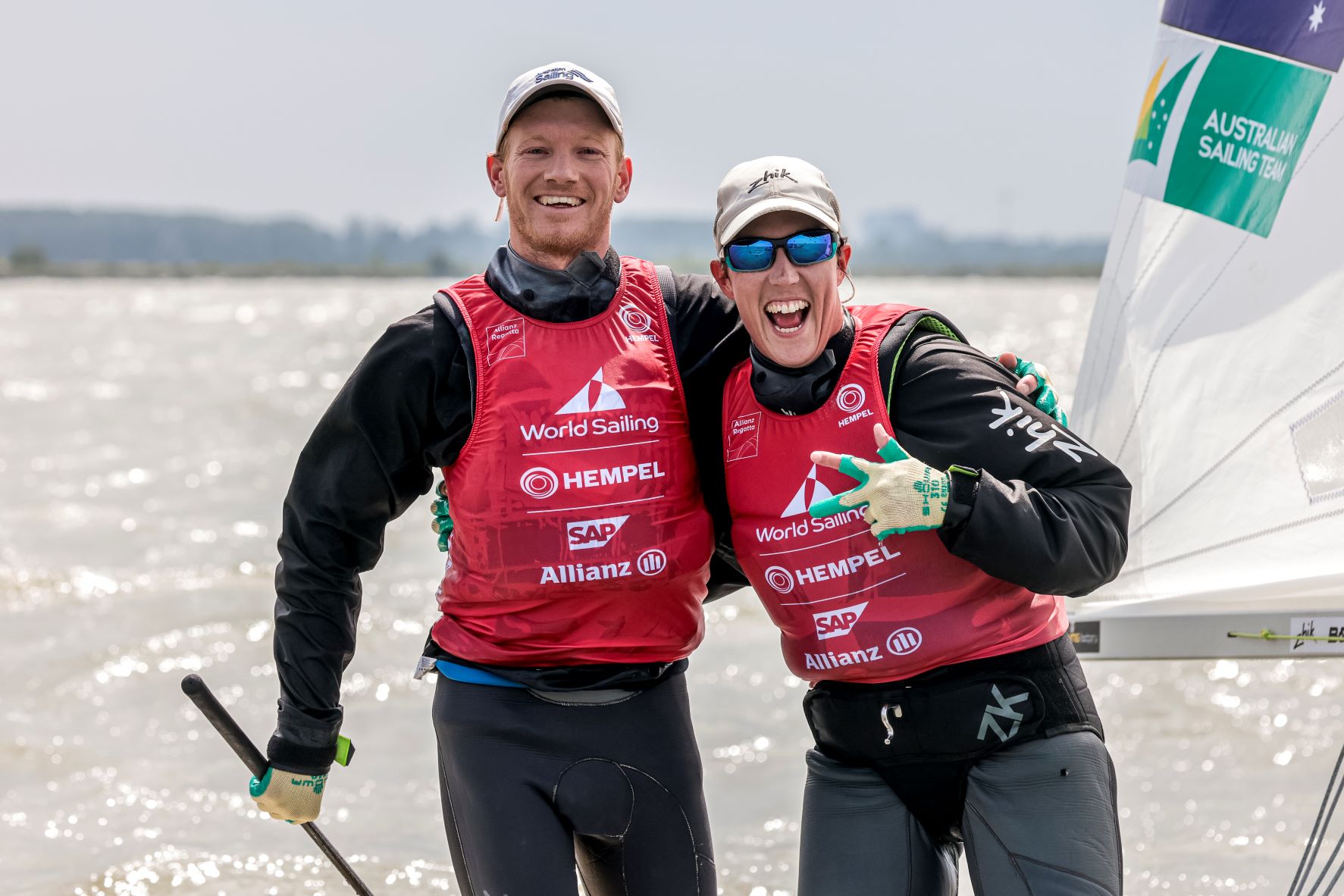 Two Australian teams have come away with medals at the Hempel World Cup Allianz Regatta, with the Mixed 470 team of Chris Charlwood and Amelia Catt securing a dramatic Silver whilst Oliva Price and Evie Haseldine held on to Bronze in the 49erFX.

Charlwood and Catt came out with guns blazing and led the Medal Race from the start with a mission to move up the rankings. They never relinquished that lead on their way to a race victory, and with the Swiss team of Linda Fahrni and Cyril Schüpbach dropping back to eighth the Aussies were able to jump them for the second step on the podium.

“It was our first Medal Race as a team and it seems like all our small fleet training in Australia pays off in Medal Races, plus, it’s always good to save the best till last,” Charlwood commented.

The 25-year-old from Fremantle Sailing Club continued, “Pretty stoked even though we didn’t have the whole fleet here we still performed really well, it’s so good to learn how to perform in a new team, finding how to get the best out of each other has been a really enjoyable process.”

London 2012 Olympic silver medallist Oliva Price and 19-year-old Evie Haseldine put together a stellar performance in their third international regatta together to finish with a World Cup bronze medal.

Price shared, “It’s really exciting to come away with a medal this event, Evie and I are pleased with how we were able to work together this week. The racing has been great; very tight out on the race course and we saw a range of conditions which was exciting.”

Queenslander Mara Stansky finished fourth overall in the ILCA 6, with a fourth in the Medal Race just not enough to snatch a medal at this week’s event. The Tokyo Olympian is always striving for greatness and it’s clear she has the determination to be on the podium next time.

“I’ve got pretty mixed emotions at the moment,” Stransky admitted. “I’m proud of finishing fourth overall, but to have been in the bronze medal position until the final leg of the Medal Race is pretty painful and I’ll probably be having nightmares about that run for a while.”

Elyse Ainsworth moved up to ninth overall in the ILCA 6 after a solid fifth place in the Medal Race, whilst Victorian Casey Imeneo moved up to 12th overall after a final race was sailed for non-Medal Race contestants.

It was a tough day for Jack Ferguson and Max Paul who went into the 49er Medal Race fifth overall. The NSWIS athletes started well but made a few small errors that saw them slip to the back of the fleet and finish eighth overall, an extremely commendable result for their first season.

Jake Liddell and Lucy Copeland were locked out of the medals before today’s racing yet had a promising result in the Nacra 17, with a third in the Medal Race placing them sixth in the overall rankings.

The Australian Sailing Team is focusing on the next steps, with some teams taking the opportunity to train just down the road in The Hague where the World Sailing World Championships will be held next year. This event will be the first chance for the sailors to qualify Australia for the Olympic Games. Other squads are heading to train in Marseille in the south of France, which will be the sailing venue for the 2024 Olympic Games.

The Aussies will be back in action at Kiel Week, Germany in late June for more racing and more opportunities to build on this week’s performance.