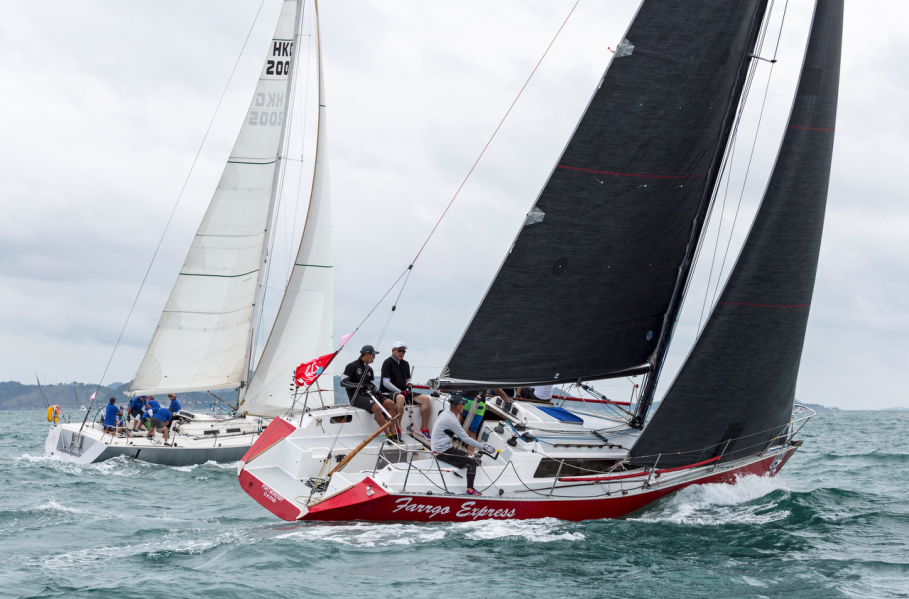 Phuket, 5 December, 2017 – Day Two kicked off as strongly as yesterday had ended with consistent, shifting and challenging winds; a day demanding of well-drilled crews and months invested prior in slickly executed technical nous. Limited margins for raising spinnakers demanded precision and timing, and mistakes illustrated the tough challenge of today. But in arduousness there is opportunity.

Race Director Simon James explains, “Course A ran windward-leeward, followed by the traditional south island course with all classes on Course B starting downwind. The fastest boats finished in around two and a half hours, up to five hours for the slower vessels. We had gusts up to 18 knots and an average wind speed of12 knots. A number of boats are affecting sail repairs following strong winds yesterday, but should all be back for tomorrow. Cruising class is subject to a performance handicap; Uminoko dominated but the grouping is brought into tight contention because of the handicap. A very competitive day in good winds”.

Consolidation continued across several classes with Kevin Whitcraft’s Thai team THA72 dominating all three of their IRC0 class races again following modifications to their jib setup which has been highly successful in these conditions so far. Japanese team Karasu skippered by Yasuo Nanamori continued their first day’s good form to win again today in IRC1. They remain undefeated in any race heading into the morning of day three (although took one disqualification yesterday after protest resolution).

Following yesterday’s faultless performance, Team Kata Rocks could only manage second behind rivals Big Boys Racing (Farrgo Express), a Chinese entry skippered by Shen Sheng. Kata Rocks Skipper Peter Dyer notes, “We have the lightest boat in the class and are hoping for some softer air tomorrow. Monday was amazing, we kept it tight and ran a conservative race as others were struggling with spinnakers and moving from side to side, so to get three bullets yesterday was incredible. We’re actually really happy today in terms of running a defensive race. We’re never going to be fastest on the longest J-shaped straight runs. It’s all about teamwork rather than the boat on a day like today, and keeping it consistent and taking advantage of opportunities. We will be ahead tomorrow in winds we expect to be lighter and more favorable. Great week so far”.

Skipper of Pine Pacific, Ithinai Yingsiri competing in Premier class spoke of the Phuket King’s Cup and more widely on regattas in Asia: “We raced a J80 at the China Cup last October (2016), where you see that about 80-85% of boats raced and sailors crewing them are Chinese. In the PKCR or other regattas in Thailand, less than 5% are Thai sailors. So we as the sailing community should support and encourage Thai people to experience sailing and racing at any opportunity”. Their Pine Pacific team finished fastest today.

He concludes, “Thailand has many good and outstanding sailors in small boats but it can be tough for them to progress into bigger keelboats. The opportunity is rare to be fair, but we should try harder. The PKCR is great for this as it ably connects Thai youths sailing dinghies to one of the world’s best big boat regattas. Sailing and racing in any regatta is a very good sport with which to appreciate nature and a test one's determination and team effort, especially in an important event such as PKCR with its long history and proud legend”.

A hard work day for the keelboat crews really suited the catamarans. Voodoo skippered by Hans Rahmann was quickest of the 850’s, British team Thor won again ahead of trailing Racing cats, and Mojo Multihull Solutions (skippered by Rick Fielding) brought home the Cruising multihulls. It was a day of sunshine, thrills and some spills – and the fond hope that nothing changes wind-wise for tomorrow.