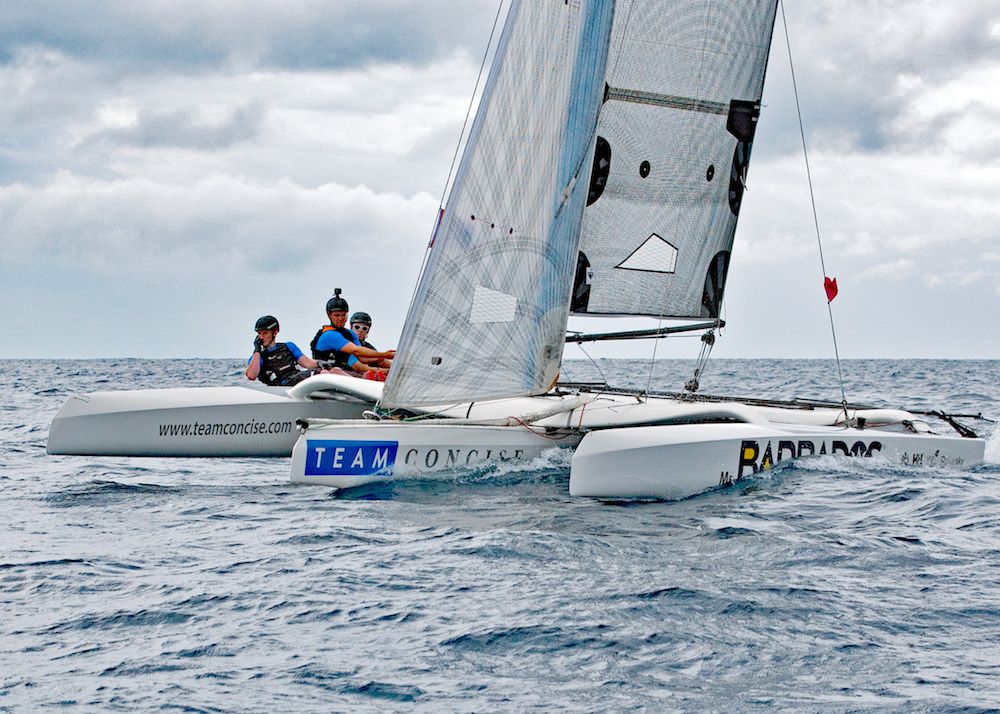 Bridgetown, Barbados (18 January, 2017): The second day of the Mount Gay Round Barbados Coastal Series organised by Barbados Cruising Club in association with Barbados Tourism Marketing Inc, and Mount Gay, produced spectacular competition once again. Although it was an unusually damp day with rain squalls passing through for most of the race, the wind built under the clouds to 15-16kts, which made for really exciting racing along the west coast of the island.

According to Steven Kern tactician aboard Whistler (J/105), winner of today’s CSA Racing division, this week is one of the most competitive he has experienced in the event’s recent history. “The starts and the close racing throughout have been fantastic. It has been consistently competitive, which is what we love.”

Kern, sailing with skipper Peter Lewis and team, who are seasoned Caribbean circuit sailors, added today’s win to their race win yesterday and are now looking good for an overall Coastal Series win. They say their secret weapon this week is a new flat spinnaker.

“The new spinnaker worked beautifully going up the west coast. It is a smaller spinnaker we can fly for longer. I think we also managed to stay focused even when we dropped up the coast. The wind dropped to less than 2kts at one stage off Holetown, but we popped the kite and gained a lot.”

The local team on Conviction (TP52) also sailed well today but had to settle for second place in CSA Racing. Clint Brooks, skipper, said the team sailed well and had better boat speed. “I think the key to our success was getting back close inshore after rounding the top mark off Holetown. Instead of heading on a straight course to the next mark, we went hard back inshore because the wind was in the north, built our angles, hoisted the kite and took off. That’s where we gained a lot.”

The big shift off the start kept the tacticians on their toes and made for a fairly crowded committee boat end start. From there on in, it seemed to pay to play the shifts up the right-hand side of first beat and those with local knowledge including Mark Hioens and team on Tropic Bird (Hunter 35) in Non CSA class, sailed well once again to lead at the first windward mark. This team, who won their class yesterday, has been enjoying a close series with fellow local sailor Jonathan Gittens on Shangri La (Morgan 41). Both have sailed impressively and are now in first and second respectively with one race to go.

It was a repeat performance in CSA Cruising with Matt Barker’s stunning Alfred Mylne 65 The Blue Peter from the UK taking his second win of the series following a good race against local sailor Mike Krimholtz and team on Dragon Magic (Dufour 385) who took second.

The shifty, changeable winds, made for an exciting race between the two super-fast multihulls – Silver Bullet sailed byBryn Palmer (Barbados Cruising Club commodore), and Concise 12 (Diam 24) – Jack Trigger, Oliver Mellor, John Hunter-Hamilton, and Victoria Akhurst. It was a game of constant change in this fleet, with Team Concise 12 finally taking control of the race in the closing stages and scoring their first win from Team Silver Bullet. It is now 1-1 with all to play for in tomorrow’s final race of the Coastal Series.

Andy Budgen on his foiling Moth Nano Project stormed round the 22-mile course but was unable to hold off Charles Trevor Hunte – Round Barbados record holder – on his windsurfer. Hunte sailed consistently in the inconsistent wind and beat Budgen on corrected time. With one race to go, the pressure for the overall win in this class is also at boiling point.

Tonight competitors, guests, families and friends are enjoying warm Bajan hospitality at the ultimate Red Cap Mount Gay Rum party at the home of Mount Gay Rum – the nearby distilleries at Brandons.

Looking ahead to final race in the three-race Coastal Series (17-19 January), the forecast is for slightly less wind from a similar east-north-east direction, which means it could be tactical day on the race course.