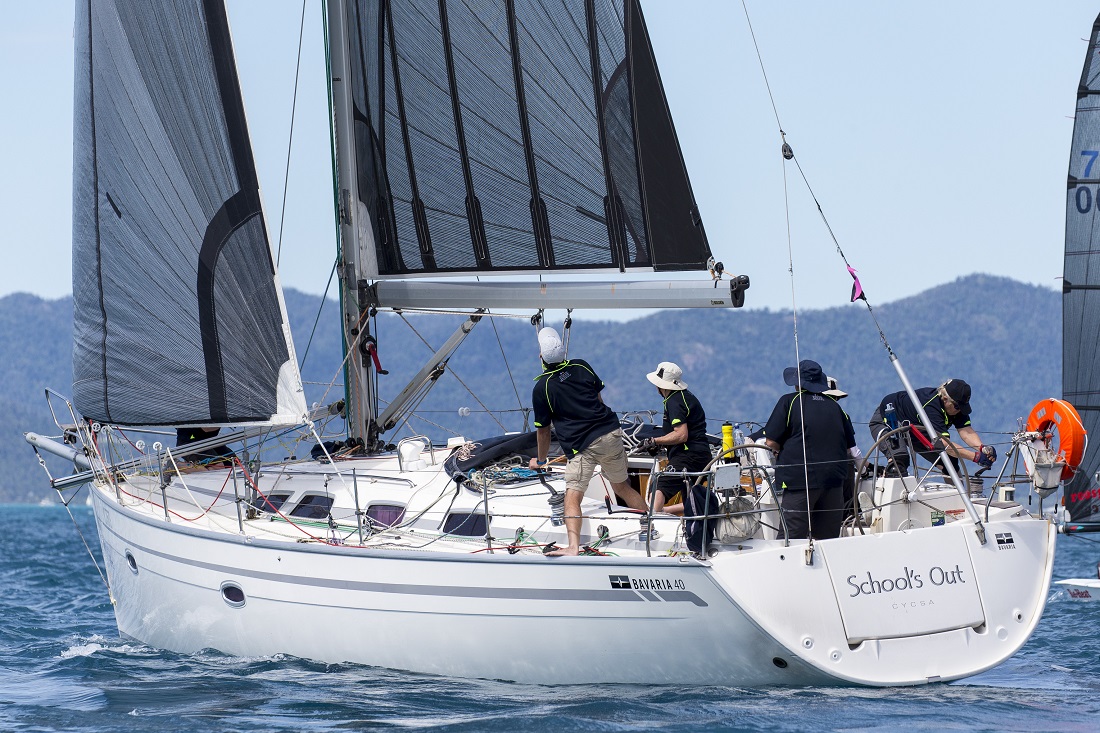 School's Out has come a long way by water - Andrea Francolini pic - ABRW.

The 31st Airlie Beach Race Week, hosted by Whitsunday Sailing Club, is in its closing stages with just one day of racing remaining, so all 114 competing boats were out on the various courses today doing their best to cement a podium place in advance of the final day.

“That was a long time on the course yesterday,” said Phil ‘Cub’ Barnett, a past 18 foot skiff world champion, as he prepared for the day ahead. “It’s good at the time, but your body hurts later when you get ashore.

Cub is normally here with a bunch of skiffy mates on Hammer of Queensland, but that was not an option this year. The Sydney sailor did not want to miss out and was co-opted to sail on Sandor Tornai’s Bethwaite 8, Skeeter.

They are sailing in the Sports Boat division. “I haven’t had to pull spinnakers out of a bag since I sailed with Trevor 35 odd years ago,” he said, speaking of his former ‘Chesty Bond’ 18’s skipper, Trevor Barnabas.

As opposed to last year’s young Cherub crew, Skeeter has three over the age of 50 this time, Cub included.” The two young guys aboard are learning fast that old age and treachery beat youth and enthusiasm every time,” Tornai said.

Going into the day, Skeeter was in eighth place overall, but after today’s three windward/leeward races, she has moved up to seventh.

Aboard also are Paul’s son William, and the guy who keeps them on the straight and narrow, Geoff Williams. The four are products of the Vaucluse 12ft Skiff Club in Sydney, so know small boats and each other well.

“The big boats couldn’t stretch their legs to outsail us on SMS handicap on these courses,” Luke Ratcliff said. “The Stig came second in all three and now we’re tied on points for the lead. They’re like the Queensland State of Origin team; they keep on coming back at us.  It all comes down to tomorrow’s final race.”

On the 10 entries, Ratcliff says: “The Sports Boat camaraderie is like a big family – we fight – then make up after every race. We’re all together at Port of Airlie and have drinks together every afternoon after racing.

“A pot with ice and rum is put on the wharf at the end of each day. I think the guys from The Stig pretend to drink it. Jamie Berndt (from Situation Normal) is the boss – the father of the group – he keeps things in order.”

And while the ‘oldies’ on Skeeter might think they are doing it tough, the owner of Schools Out, from South Australia, has a story of his own. Owner, Adrian Wotton, has sailed his Bavaria 40 Cruiser all the way from home via Melbourne, where he stopped to loan the boat to Mary-Ann Harvey to race in the Australian Women’s Keelboat Regatta.

Adrian Wotton says, “We left Adelaide on 1st of June and sailed in freezing cold weather to Melbourne. It was cold, lumpy and wet; the highlight was sailing to Port Ferry. It took us five days

“We sailed to Sydney next, based at Pittwater for three weeks, did some cruising around there and sailed on to Mooloolaba, then onto Airlie Beach Race Week. It’s been a lot of fun, though I wish it had been warmer. My partner joined me in Mooloolaba with a case full of sarongs, but wore winter gear, it was so cold.

“From Airlie we’ll sail back to Adelaide. It’s been fabulous flat water sailing here at Airlie and great organisation. The friendliness of the event and locals has been wonderful,” says Wotton who is currently ninth overall in Cruising Division 3.

In the Trailable Yachts division, Derek Sheppard is still marvelling at their little fractional rigged Elliott 780, Black Sheep.  He and brother Martin have swapped ocean racing for small boats for the time being.

“I’m having a ball here sailing the boat,” Sheppard said with a big smile last night at the island resort-style Northerlies where Day 4’s prize presentation was held.

“We’re sort of between boats, sailing this one until I decide what direction to go in next,” the competitive Sydney sailor said from second place overall last night. He was three points behind the Trailable Yachts leader, Hairy McClary, also an Elliott 780, owned by Tim McCall from Queensland.

This afternoon Hairy McClary retained her place at the top of the board by finishing fifth. Black Sheep is now third overall following sixth place today, with Tom Vujasinovic and his Masquerade in second overall following victory today.

Just one day of racing remains at the event when all division winners will awarded at Whitsunday Sailing Club tomorrow evening.

Tonight the throngs will be entertained with music from Kieran McCarthy from 3.30pm at WSC and from 6.30pm by Left of Centre, accomplished entertainers with a great range of music.