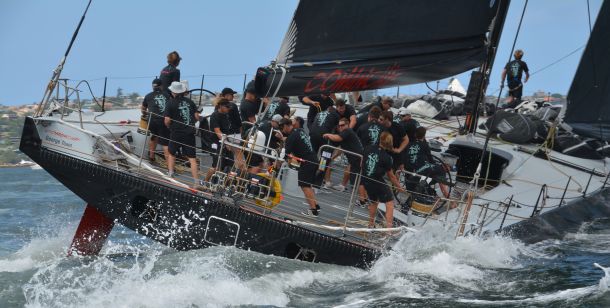 When it comes to regatta headlines, nothing beats having Comanche and Rambler 88, the yachting world's two newest and most sophisticated (a.k.a. mind blowing) racing machines, compete head-to-head for the first time ever. Add to that a slew of famously talented sailors on teams rounding out to 75 or more against the postcard-perfect backdrop of St. Barth, with its ever-blue water, dependable trade winds and relentlessly active shore life, and you have the developing story of the sixth annual edition of Les Voiles de St. Barth, scheduled for April 13-18, 2015.

Comanche, designed by the French team of VPLP Design/Guillame Verdier, and Rambler 88, designed by Argentinian Juan Kouyoumdjian, were launched in late 2014 at Hodgdon Yachts and New England Boatworks, respectively. Both yachts sport state-of-the-art carbon fiber hulls and rigs, but each has special features that, although tested on previous boats, have been combined with other innovations on these yachts for the first time. For instance, Comanche's monolithic (as opposed to sandwiched honeycomb) construction in its forward hull sections certainly qualifies as “beyond normal,” but to keep up, Rambler 88's rudders seem to have been nibbled on by sharks around their leading edges.

“When it comes right down to it,” says Comanche's helmsman Ken Read, “the general concepts of the two yachts are very similar; they are big wide boats that rely on canting keels and width for their stability. The biggest difference is sheer size. Comanche is a big 100 footer, while Rambler looks to be a much more manageable-sized 88 footer. But don't let the size fool you. Being manageable is all relative, and each will be a handful when the breeze kicks in. Both boats have their versions of ‘unusual,' but whether it's the size and shape of Comanche or the sabre tooth rudders on Rambler 88, the underlying part of the story is that these boats were born to go fast, and their owners are both huge promoters of innovation.”

Rambler 88's owner George David has made headlines before (at Les Voiles and regattas elsewhere around the world) with his previous Ramblers, a 100 footer and a 90 footer, and it was his love of the latter boat that convinced him to settle on a smaller rather than a larger design this time around. The strategy served him well when he finished second in his shakedown competition: January's Ft. Lauderdale to Key West Race. In December, Comanche, which launched only a month earlier than Rambler 88, completed the Sydney Hobart Race, finishing second to line honors winner Wild Oats and giving a sneak peek, like Rambler 88 did, of her possibilities once she has her legs fully under her.

“There were some conditions where Wild Oats and Comanche, two boats that look nothing alike, were actually remarkably close in speed,” said Read, adding that he expects the same can happen between Rambler 88 and Comanche. “It's horses for courses; each boat will have its condition one time or another and succeed in it. But the bottom line is wide boats like breeze, which Les Voiles has, so you're going to see two really cool boats blazing around the island of St. Barth.”

Read reiterated that both boats were designed to let loose in the middle of the ocean, so why around-the-buoys racing at Les Voiles de St. Barth? “For the pure fun of it,” he said. “Comanche's owners (Jim Clark and Kristy Hinz-Clark) did a lot of sailing on the boat in Sydney and just had a blast. They couldn't think of a place that was more fun to sail than St. Barth. They'll bring three, four, maybe five friends on board racing each day, and we'll most likely put a couple of them on the handles and get them into the action.”

Though currently in the spotlight as skipper of Comanche, Ken Read is a two-time US Sailing Yachtsman of the Year (1985, '94) and six-time world champion in the J/24 class, with three America's Cup campaigns and two Volvo Ocean Races to his credit. He is typical of the high caliber of talent that competes at Les Voiles, which serves as a reunion, of sorts, for those in Read's league.

As a case in point, Terry Hutchinson, US Sailing's most recently named Yachtsman of the Year, will be sailing aboard the Maxi 72 Bella Mente, and he looks forward to meeting up with his old friend Loïck Peyron, who has been named “Ambassador” of this year's Les Voiles de St. Barth. Peyron, too, has just won his country's highest sailing honor, having been named the French Sailing Federation's 2014 Sailor of the Year for winning the 10th edition of the Route du Rhum with his 130-foot trimaran Banque Populaire (designed by the same French contingent behind Comanche).

“I know Loïck well,” said Hutchinson, explaining that the two overlapped during the last America's Cup at Artemis Racing, when Hutchinson was the skipper and Peyron was a consultant (before transitioning into helmsman) due to his vast multihull experience. “He took me sailing on Banque Populaire when I was in Lorient, and it was just awesome. To consider some of the stuff he has done…all that goes into it…all the planning…that stuff doesn't just happen.” (Peyron is also a three-time winner of the Observer Single-Handed Trans-Atlantic Race, two-time winner of the Transat Jacques Vabre, and current holder of the Jules Verne Trophy (for the fastest circumnavigation around the world.)

“I always came to Saint Barth at the end of a transatlantic race and was so tired I never had time to enjoy myself,” said Peyron, who remedied the situation by competing aboard the maxi yacht Sojana in the inaugural Les Voiles de St. Barth (2010). “By participating in Les Voiles de St. Barth, I was finally able to appreciate the island, as picture-perfect as a post card. The trade winds, the turquoise waters, and these magnificent boats…. We are really lucky to be able to sail in such an extraordinary place!”

Hutchinson, who sailed on Bella Mente during last year's event only to have all hopes of winning dashed when the boat broke its mast, concurred: “Les Voiles de St. Barth and the RORC Caribbean 600 – those are the go-to regattas in the Caribbean,” he said. “The island (of St. Barth) is beautiful, and the sailing is really great: coastal racing with some good windward/leeward elements to it. And shoreside…you've got to work pretty hard to complain about St. Barth.”