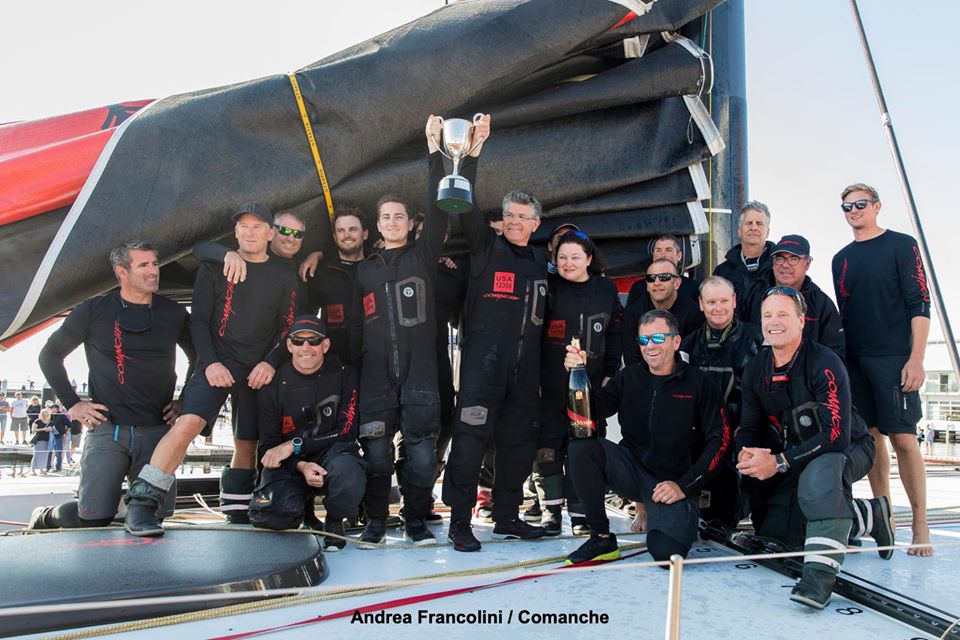 Jim Cooney's 100ft supermaxi Comanche has taken line honours in the 2019 Rolex Sydney Hobart Yacht Race. The big red boat crossed the finish line off Battery Point at 7.30.24 am after an agonising drift over the final few miles.

Comanche overcame a poor start on Sydney Harbour to lead the fleet down the NSW coast in strong north-easterlies but lost her lead several times as all five supermaxis struggled with a transition to soft southerlies on the first night.

However, Cooney took his boat further offshore on the second day and the tactic worked. At sunrise, she was entering the Derwent and racing along at a steady 20 knots.

As predicted, however, Comanche ran out of wind at the Iron Pot and the crew had to call on all its experience to keep the 100 footer moving. On two occasions they failed and the outgoing tide pushed the boat backwards, away from the finish.

Finally, within sight of the finishing tower, a gentle northerly provided just enough propulsion to get her across the line. She was cheered by a large spectator fleet and some early risers who lined the shore.

“Finishing the Transpac in Waikiki (Honolulu) this year (he took line honours) was much better. Finishing this race here, that was traumatic. That's 30 minutes of my life I'll never get back,” Jim Cooney said of the period Comanche was parked on the Derwent this morning. “It was really stressful. [Winning] was relief more than elation.

“Last year (when the boat finished third) was very frustrating; having led all the way down the coast until we got to Tasman Island. You'll always remember that disappointment, but it’s faded a little bit after today,” he said.

InfoTrack was second across the line, around 45 minutes after Comanche, and attention then turned to the exciting battle for third. Wild Oats XI ultimately defeated Scallywag by just 38 seconds with Black Jack in fifth after all three were “parked” just 7nm from the finish, with less than 700 metres separation across the three boats.

Owner of InfoTrack, Christian Beck, was asked how he felt about the race up the Derwent. “Yeah I think we were sort of half happy, half worried ourselves. We were happy to catch up to Comanche but a bit worried that the other skinny boats would catch us. So it worked out okay, very happy with the second.

“I think it’s exciting – it was great that we could see the boats most of the race. It’s so much better to be able to see other boats than be by yourselves so I think the last few years have been very exciting.”