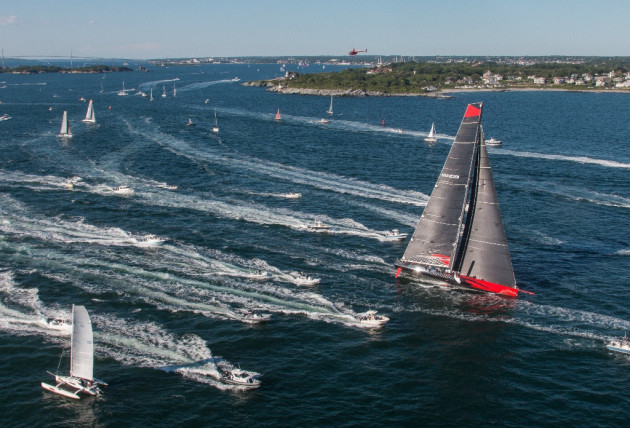 Hamilton, Bermuda: June 19, 2016— Comanche has set a Newport Bermuda Race record celebrating her line honours victory in the 50th Thrash to the Onion Patch, Newport Bermuda 2016. Jim and Kristy Hinze Clark’s 100 foot screamer, skippered by Ken Read, crossed the line off St. David’s Lighthouse at 4:22:53 EDT. Her elapsed time is a provisional 34hrs 42min 53sec, almost five hours ahead of the previous 39:39:18 set in 2012 by George David in Rambler.

Skipper Ken Read said that there were four main factors that led to Comanche’s record run to Bermuda. He pointed to the total commitment of the owners Jim and Kristy Hinze Clark, to a boat that was built especially for breaking records, to a crew of seasoned professionals, and to Stan Honey, who Read called the world’s best navigator.

It was Honey who found a crack in the high pressure ridge stretching across the rhumbline on the opening night that trapped the rest of the fleet north of the fresher breeze above the Gulf Stream.

“Stan and I have a great working relationship,” Read said. “I love the tactical side of the navigation and he does the weather side. Breaking records is important to us as much as it is to Jim Clark, who followed the race every second of the way and called us on the boat two minutes after we finished!”

“Looking at the weather three days before the start, it looked like we would have a pretty good run at the record. One thing that concerned us was the late start and the wind shift that would go with it. There was a high pressure cell building across the course. With an earlier start we could have beaten the high, started on port tack and stayed on it all the way to Bermuda. Even if it was a sea breeze day, the wind would have been fading. That late start cost us four or five hours. We could have beaten that little high out on the easterly breeze but because of the delay, we had to take a left turn and go out and around it.”

Read said that instead of going all the way around the high, Stan found a space that separated the high into two cells which allowed Comanche to cut the corner and get just ahead of the ridge. “When we escaped, all of a sudden the hard part was over. The boat did it’s job.”

“The boat is just as good as it looks,” Read added. “She’s a big, wide, beamy boat that eats up miles on a reach. We were averaging 28 to 29 and our highest speed was 32 knots. If it is blowing 28 knots we’re doing 28. At wind speeds in the 14knott range, we outsail the wind by four knots or more. But you can’t sail a boat like this without a great crew. Kasey Smith is the boat captain and Ihave been around the world with him twice. I wouldn’t leave the dock without Kasey.”

When Stan Honey was asked to comment on his plan, he explained, “Because our start was so late, the northeaster wasn’t going to fill in all the way to the shore in the evening. There was a high-pressure ridge building south of Newport, walling off the course. We carefully went through all the weather files and compared them to the models and weather buoys and our own observations. We found one that worked well for us.”

“There was a portion where two little highs had separated with a bit of a hole in between. We sailed around the edge of the western high, gybing around it and never got below 8kts of wind. We gybed twice, actually.” Honey said.

Read added, “We expected to be drifting which would have killed our record hopes. But all of a sudden we pop out of the other side and it’s like— There is a God… let’s get out of here!”

Read and Honey were concerned that if this had been a conventional race with the boats knotted together in the early going, their late start would have left them sailing through the slower boats in pitch dark. Luckily the fleet was spread out by the early wind shifts. “It’s one thing in the Fastnet Race, but that is a daytime start and you can make hand signals to tell other boats that you are going to dip them, but that doesn’t work at night.”

The largest waves Comanche saw in the Gulf Stream were just 3 meters and the highest winds in the mid 30’s. After sliding out of the grip of the high-pressure ridge, which still holds many of the competitors away from the new wind in the Gulf Stream, the race was just a comfortable reach to Bermuda. Ironically, the highest winds, 49 knots, came during a squall while Comanche was navigating through the north shore channel heading from the finish line to the Royal Bermuda Yacht Club in Hamilton.

Owners Jim and Kristy Hinze Clark plan to attend the prizegiving at the Bermuda Governor’s house on Saturday 25th June, and Read has already gone back to his day job as President of North Sails to build a  mainsail with a 300 foot luff for a new sloop. For Comanche, it’s back to Newport to prepare for a trans-Atlantic monohull record attempt later this summer, maybe another Sydney Hobart, and the Transpac in 2017.

If you could not go to Newport for the start, the start can come to you. Watch a replay of live video and commentary of the start on Livestream. Commentator Andy Green hosted the program from the Inn at Castle Hill overlooking the starting line. With cameras on the hill and on the water, he was close to the action bringing live sailing directly to you.

Virtual spectators can watch the race unfold as their favorite yachts, skippers, or crewmembers in this 635-mile ocean classic tack and gybe their way through the Gulf Stream and hunt for the wind in the ‘happy valley’ north of Bermuda. All boats in the 2016 fleet will be tracked by YB satellite trackers as live as it can be on Pantaenius Race Tracking — www.pantaenius.com/NBRtracking— your link to all the action in the race. Reports are delayed by 4 hours to maintain fairness in the competition.