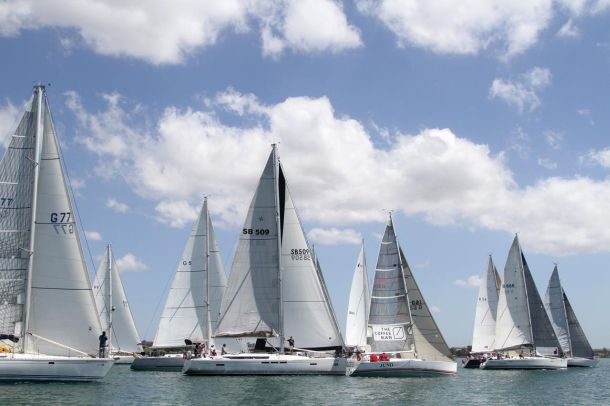 The enormous cruising fleet that makes up 65% of the total number of entries at the 173rd Festival of Sails made the most of the fluky winds and another stunning summer’s day at Geelong on their penultimate day of competition.

Each cruising division peeled off the start line just off the Royal Geelong Yacht Club in five minute intervals in light winds starting at midday. They weathered the breeze moving around the dial and provided the best colour – processions of bright spinnakers lighting up Corio Bay and the outer harbour.

The day’s action was definitely on the Rating Series course area on the outer harbour.  Division 2 had its moments with a port/starboard between Extasea and Schuss and in division 3 the Farr 30 Vertigo, suffered substantial damage when another boat in the same division ran into skipper Jamie Goode’s 17-year-old Cruising Yacht Club of South Australia entry.

“We had a really good day. The first and second race went well but in the third race another boat slammed us into the committee boat,” the South Australian said of the start incident. “We have a broken spinnaker pole, the spinnaker was destroyed and more.”

Tonight Goode is not sure whether his crew of six will progress in their series that is due to wrap up tomorrow, Sunday January 25, 2015.

“We came a long way, we have been planning this for two years, all of us took holidays,” he said. “It was the worst thing that could have happened. But that’s just yacht racing, we never give up. We will definitely be back next year.”

Club Marine Cruising with Spinnaker Division 2 winner Xpresso went from two knots to a top boat speed of 18. Melbourne skipper Ari Abrahams said it was smooth sailing especially considering this is the X Yacht’s debut at the Festival of Sails.

“We had a really good start in clear air and were then able to stay in the light breeze up the first leg. The breeze filled in and we were advantaged by that compared to the rest of the fleet,” Abrahams said. “We don’t know the other boats but they are a very competitive fleet.”

Joust claimed first place in the Boag’s Premium Cruiser/Racer division 1, skipper Rod Warren pleasantly surprised to hear his rare J1/11 French boat with fresh sails did the trick, despite a slight mishap at the end of the race.

“We will have a bigger bottle of champagne tonight,” he laughed. “The boat has new 3Di sails and went very fast in light winds but we missed the finish line and had to go back 10 minutes so if we still won that’s pretty good. The boat is six months old and I haven’t sailed on a keel boat before. It is our first big regatta.”

The Melbourne doctor and his crew of seven, all skippers of their own boats, are lapping up the Festival of Sails atmosphere.

“We had no idea Geelong was so good. I said to someone ‘how long have you been keeping the regatta a secret?’ They said 50 years,” he laughed.

Tomorrow is the penultimate day at the Festival of Sails with offshore activities buzzing leading up to Australia Day on Monday.

Full details of the free waterfront community festival can be found here.