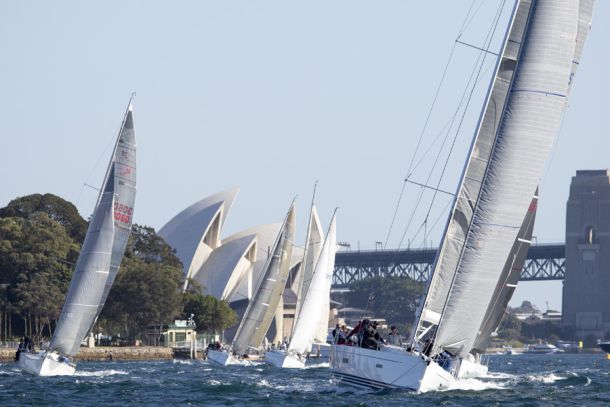 It’s a wrap! The curtain has come down on the Land Rover Winter Series 2014 with the Closing Ladies Day race being contested by 37 competitors who were treated to a sunny but brisk Winter’s day with 14-20 knots of breeze in the Cruising Yacht Club of Australia organised race.

Having fun was the theme of the day with the crew of Eye Appeal getting into the spirit of Ladies Day dressing up in Hawaiian shirts and Scottish tam-o-shanters. The ‘fun’ element did the trick as Eye Appeal won Spinnaker Division 2.

“It was my first time at the helm and the crew were a great help,” Caroline Phillips said. “The crew listened to me and vice versa. Our handicap meant we were one of the late starters in our division so we were playing catch up all afternoon.

“The conditions were gusty but the crew helped me throughout the day. We didn’t know we’d won until we’d crossed the finish line,” Phillips added. Lauren Barber (Velocity) finished second with Angela Farrer (Clewless?) third.

Race Officer Darryl McManus got the fleet away on time, on their respective course A, in 17 knots of south south westerly breeze.  “It’s a beautiful day – the sun is shining, the breeze is a little chilly but it’s holding steady. We’re in for a quick race.”

“A few boats have had some issues with their spinnakers coming downwind but they managed to recover and continue on,” McManus added.

“Our boat loves the bigger breeze and I managed to control her in the conditions,” Blanc-Ramos said. “I had a bit of a battle steering as I’m used too much smaller boats that react quicker.”

Blanc-Ramos has been sailing on the Elliott 7s at the CYCA’s Youth Sailing Academy and is part of the Women’s and Advanced Match Racing squads.

“We were one of the early starters in our division, so we were able to get out in front and sail our own race. Our crew was made up of some of the girls I train with at the Youth Sailing Academy and my Dad who was telling me what to do!,” Blanc-Ramos added.

Applejack was also the lucky winner of the Range Rover Evoque for a week however Tara is unable to drive it: “I’m still on my L-plates so we’ll have to share the Evoque with the crew!”

In Non-Spinnaker Division 1, Sagacious V (Margaret Hundt) came away with the win from Viva (Pauline Christie) and Trim (Lauren Walsh). All divisional winners will have their name engraved on the Chris Lee Memorial trophy.

The ‘Simply Irresistible’ ladies from Reve started the morning in great spirits, parading along the deck to Robert Palmer’s 1988 cult classic.

“The introduction of the Ladies Day Pointscore Series was a fantastic idea. I hope it encourages more boats to participate next year,” Lisa Wilkinson said.

“It was pretty full on out there today – I was a bit nervous with the big breeze but our tactician, my husband Matt, did a fabulous job as did the rest of our crew.

“We were keeping our eyes on Applejack and Privateer – we hoped we would catch them but it was tough in the big breeze to get them.” Out of Sight finished fifth today but this did not affect the outcome of the series when combined with their win in the Opening Ladies Day Race.

The crew of Next were in high spirits as they were announced the winner of Spinnaker Division 1 in the Ladies Day Pointscore Series. “The girls were able to go one better than the boys and win our Division – they only managed a second in Division B in the pointscore,” Hayley Fowler, said this afternoon.

“There were a few interesting challenges with the bigger gusts but we worked well as a team to pull through,” said Jane O’Brien who co-skippered with Fowler.

All winners and placegetters in the Land Rover Winter Series are invited to celebrate their success at the prizegiving which will be conducted at the Cruising Yacht Club of Australia on Friday 18 July. Log onto www.cyca.com.au for further details with bookings required by midday Monday 14 July.

Go to http://www.cyca.com.au/sysfile/downloads/2014_winter/index.htm for full results