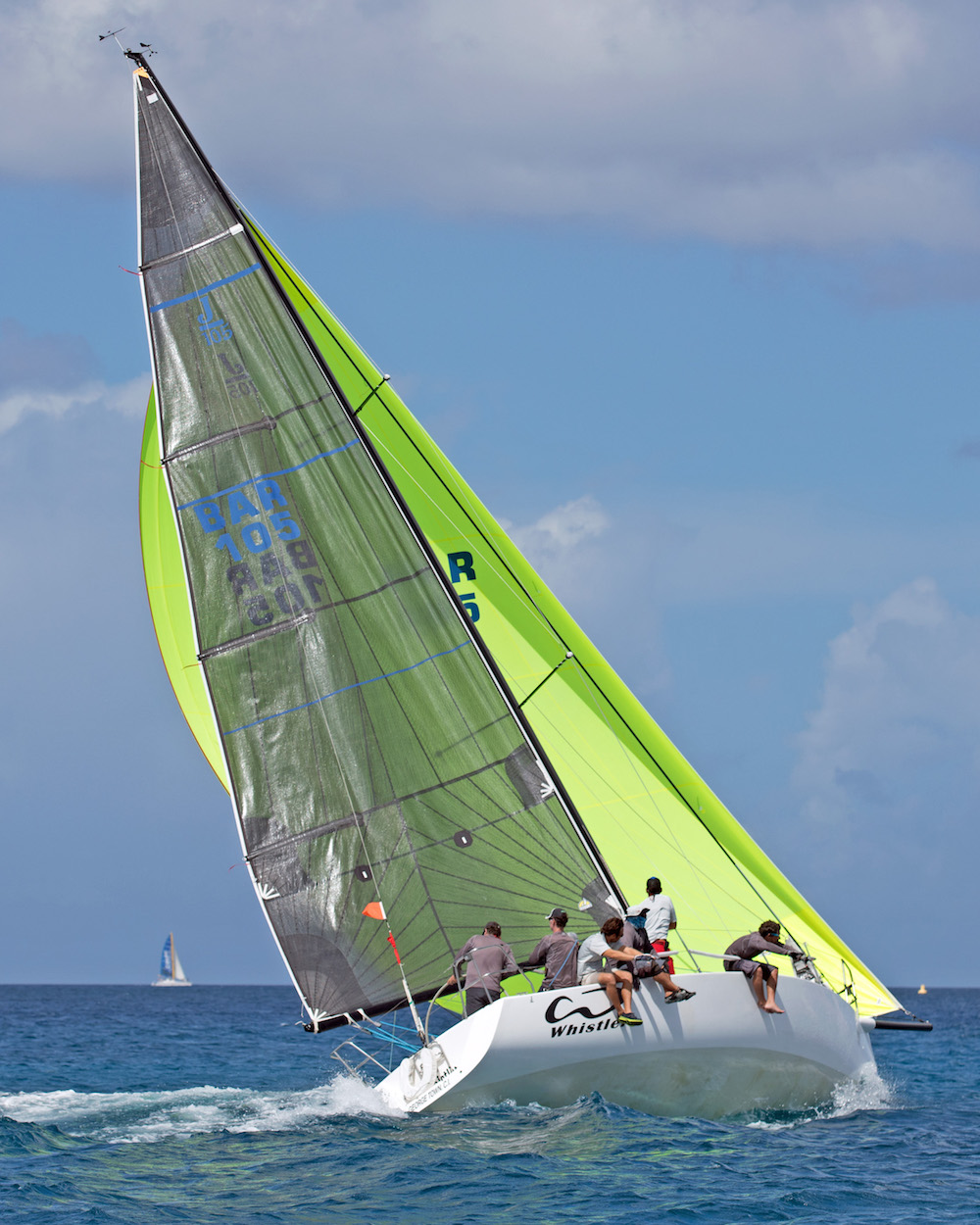 The second and penultimate day of the Coastal Series, traditionally known as the Two Restaurants Race, took place over a 22nm course and offered spectacular sheltered flat water/fast reaching conditions on the leg to and from the northern-most mark at Holetown just off The Beach House restaurant. On the southern part of the course to the Tapas Restaurant mark, the more lively conditions in the stunning, vibrant turquoise waters gave competitors a real taste of Caribbean sailing at its best.

Racing was close once again particularly in Non CSA division where Mandy (Hunter 29.5) sailed by Bruce Robinson and team managed to hold off their closest rivals on Bill Tempro’s Hunter 36 Sail La Vie. Tempro and team looked good off the start line and sailed well but there was little they could do to match the impressive speed of Team Mandy and had to settle for second place once again. With two wins Robinson and team have clinched the series, which means the race for second place overall will be decided in the concluding Coastal race tomorrow.

Charles Hunte, the current Windsurfer Mount Gay Round the Island Race record holder was on top form again today on his Starboard Phantom Batwing 377 raceboard although he did confess to feeling shattered after enduring a tough three-hour stint on the water. “Had a fab time and it was absolutely beautiful sailing weather but three hours ten minutes on a board was a little long. The first bit in the flat water up the west coast was ideal and was where I had the most speed. There was plenty of excitement out south too because I was joined by a mass of flying fish; they were everywhere and it was quite amazing.”

Andy Budgen racing his Exocet foiling International Moth Nano Project had a good sail but suffered with gear failure, which ultimately led to him not completing the course correctly: “It was all a bit crazy today because I had to stop and carry out more running repairs. I discovered the fitting that attaches the spreader to the shroud had broken off. I actually managed to fix it and was quite pleased with myself but blew it when I discovered I’d missed out the final mark. This week is certainly testing out my seamanship skills, that’s for sure.”

Processional it may have seemed but the long west coast leg from Carlisle Bay to Holetown provided plenty of opportunity for tactical racing. In CSA Racing, Peter Lewis’ team on the J/105 Whistler demonstrated its skill by managing to hold its kite for the duration of the leg (there and back), despite a few debatable moments when the reach looked almost too tight. It paid off however, and this local team of hotshots maintained pace throughout and managed to keep the ever-threatening team on the TP52 Conviction in second place.

The Barbados Offshore Sailing Syndicate (BOSS) that runs the TP52 Conviction project that promotes youth in sailing was flying today. David Staples on the helm together with Clint Brooks (crew boss) and the young team sailed impressively and finished the day in second place overall.

Staples commented: “We thought we may have just beat them [Whistler] today but not quite. We had a great day and I have to say that of all my 40 years of sailing here, today was what I regard as classic West Indies sailing conditions; good breeze and enough sea to remind you that you are sailing on an ocean. I was also impressed with the team today they worked well and there were plenty of smiling faces, which is what it is all about.”

In the meantime crews are taking time to relax after a tough day on the water before preparing for what is arguably the most talked about/popular social event of the week – the ultimate Mount Gay Red Cap Party at the home of Mount Gay at the distillery in nearby Bridgetown.