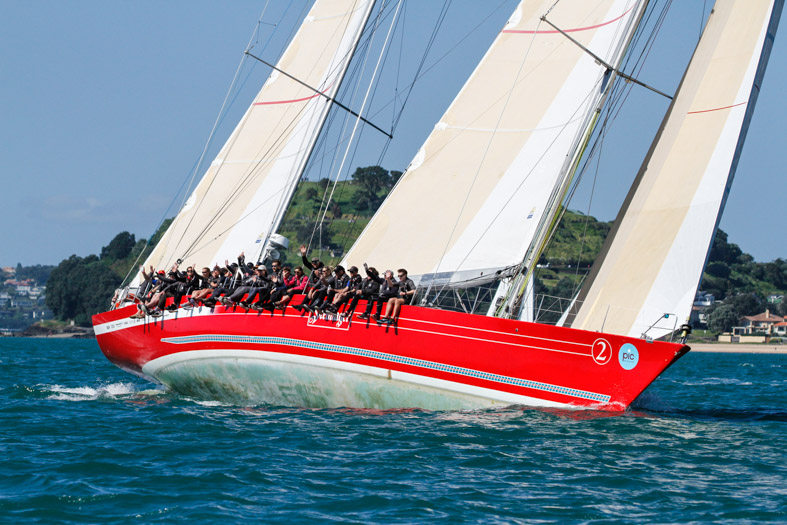 Considering that the fleet was on the wind for the entire race from Auckland to Russell, the PIC Coastal Classic was deemed “a good one”, by competitors who were enjoying the Bay of Islands’ sunshine after the race.

As the annual event that marks the start of the summer boating season, it certainly didn’t disappoint.

John Muir, Past Commodore of the Royal Akarana Yacht Club, gave us an overview of the race on board his boat Georgia One, whose provisional results placed him seventh in Division 1b.

“It was a good sail, we were lucky with the weather really,” he said. “There was no tacking and we had Mojo and Titanium behind and in sight within a half a mile the whole way up.

“We did really well… until the last 20 minutes. We stayed in close to shore toward the finish line when we should have gone out. They both got us right on the finish line – and Cotton Blossom did too, unfortunately.”

Logan Fraser of C U Later said the exact same thing happened to them. Tactics came into play right until the very end, which was difficult, as many boats finished in the fog early on Saturday morning. It was difficult to pick where the breeze would carry them into the finish line best.

Another, on board Carpe Diem, described the final run into the finish line from Cape Brett as, “a turtle chasing its prey”.

As of 1:00pm Saturday, there were still eight boats left racing. The lucky last to round Cape Brett was Saturday Night Special, helmed by 14-year-old Tim Roper, on the boat recently built by his father Allan.

The race’s first solo female entrant, Tamsin Worsley, persevered through 27 hours of racing without any self-steering devices when she crossed the finish line in front of family and friends at 12:40pm. It was just in time for her Mum’s birthday lunch at The Duke of Marlborough Hotel for 1:30pm.

If it gets to 3:00pm and there are any boats remaining on the race course, they can radio in their GPS position to race organisers who will rank their finishing positions on the water.

Final results will be available after 3pm when the race reaches its official time limit at: www.coastalclassic.co.nz