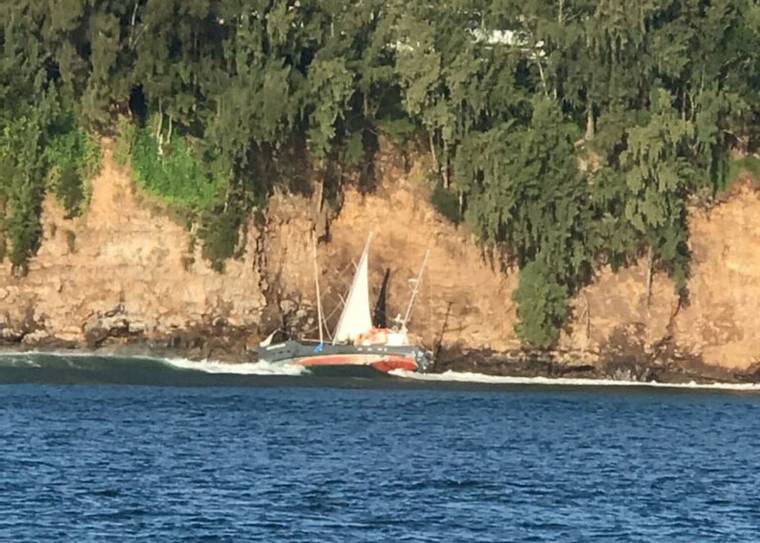 The U.S. Coast Guard is assessing today the environmental impacts of a motorized sailboat, operated by an older man who said he crossed the Pacific, and crashed Monday along a rocky shoreline in Hilo Bay.

Hawaii County Fire Department personnel airlifted the boater, described as an elderly man, who told said he had just arrived from Los Angeles and had spent 34 days at sea, fire officials said.

Battalion Chief Ian Smith said after medical personnel examined the man, he declined further treatment and transport to a hospital so very little information was obtained, including his age.

The boater, despite having crossed the Pacific, lamented that he didn’t even make it to (Hilo) Harbor.

The boat held a maximum potential fuel load of 1,800 gallons of diesel, and two marine batteries, the Coast Guard said.

At 5:33 p.m. Monday, Sector Honolulu watchstanders received a report from the Fire Department of the 63-foot boat named Midway Island on the rocks northwest of Hilo Harbor with a mariner aboard.

Smith said fire rescue personnel had difficulty seeing the boat because it was at the bottom of sheer cliffs between Wainaku Scenic Point Lookout and Honoliii Beach Park.

A rescue specialist aboard Rescue Chopper 1 was lowered onto the deck of the boat, which was “teetering on rocks and being slammed by waves,” fire officials said in a news release.

The rescue specialist pulled the man from the rough waters and placed him in a Billy Pugh net, Smith said. He was then airlifted to the beach park.

The Coast Guard early this morning launched an HC-130 Hercules aircraft and crew with a pollution responder on board to conduct an aerial assessment of the surrounding area for pollution threats. Another responder from the Coast Guard’s Marine Safety Team Hawaii is conducting a surface assessment with the Hawaii Department of Land and Natural Resources.

“At this time, the vessel has not discharged any pollutants into the environment,” the Coast Guard said in a news release.

The Coast Guard and state and local officials, will continue to oversee assessment and mitigation efforts. So far, there have been no reports of impacted wildlife.

The weather on scene includes 3-foot seas and 10 mph winds.