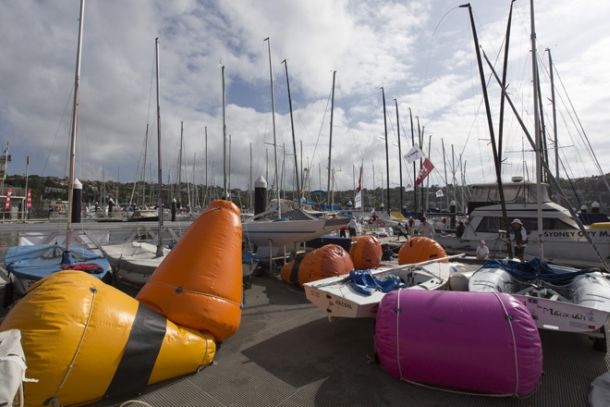 A gloomy rainy morning greeted competitors as they arrived at Middle Harbour Yacht Club this morning, but by 9.30am, the clouds had parted, the sun was out and the rain had stopped as crews prepared their various boats for the 10th anniversary Sydney Harbour Regatta being held this weekend.

A confident Denis Thompson, the Principal Race Director the annual event commented: “The sun is out and a 15 knot north-easterly is expected for the midday start – perfect timing.

“I think we’ll have fairly typical autumn weather; tomorrow’s forecast is for a light easterly or south-easterly breeze. Should be a pleasant end to Sydney’s summer of sailing,” Thompson said, adding that he could see no reason why racing would not get away on time.

“I’m really looking forward to the weekend,” said double Olympian Nicky Bethwaite who is sailing on the back end of Justin Brownbill’s Sydney 36, Botany Access Cokomo, which her husband Keith Le Compte will skipper.

“The sun is out, looks like it’s going to be a great weekend, what’s not to like? There’s a nice buzz about the place, especially since the fire,” Bethwaite said, referring to a fire in restaurant at the Club in mid-February which miraculously hardly touched the sailing club.

Among the classes sailing over the weekend are the J70, Yngling, VX-One and Cavalier 28’s holding their NSW Championships, 5.5 Metre, Super 30, Melges 24, Adams 10, J24, Production, Historical 18, PHS classes and the IRC yachts on an offshore windward/leeward course.

Competitors and friends will join up again after racing back on the sands at Middle Harbour Yacht Club for a night of dancing to live band Peppermint Jam and a relaxing dinner and drinks.

For all information and full results: http://www.shr.mhyc.com.au/